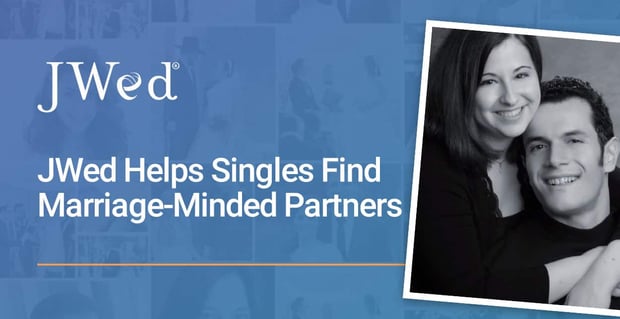 The Short Version: Since 2001, JWed has helped thousands of Jewish singles find partners for long-term relationships and marriages. The tools JWed uses include video chat features, expert blog posts, and Instagram Live stories. The online Jewish dating site focuses on empowering singles to confidently make the first move with others they’re interested in — no matter where they are in the world.

After meeting on JWed, Brad told Betty that he’d be traveling to her neck of the woods for work. Since it was a holiday, they wanted to secure reservations at a local kosher restaurant. But when they found that the restaurants were full, Brad and Betty decided to get smoothies instead and drink them in Brad’s car.

In the story they prepared for JWed, an online platform that connects Jewish singles for long-term relationships and marriages, Brad and Betty explain what happened next.

“After some flowing conversation, Brad reached back to the seat behind him and brought forth the aravot and hadassim (myrtle and willow branches) he had just purchased at the Judaica store for the holiday. Carefully and consciously, he unwrapped the outer foil layer and then gently peeled open the paper towel which kept the species hydrated. He held them in his hands with such a sense of grace and respect, that it impacted Betty in a way she couldn’t understand and it left a lasting impression.”

JWed focuses on connecting  Jewish singles who are serious about marriage.

Later, after they’d parted, Betty told Brad that his connection to those religious objects played repeatedly in her mind. They said they soon realized that their spiritual connection and religious heritage bound them.

The couple said they believed that divine intervention brought them together on JWed, and, soon after, they started talking every night. Not much later, they decided to get married and blend Brad’s five children and Betty’s four. Brad and his family moved to Miami, where the couple was married.

Brad and Betty are just one of many couples who have married after meeting on JWed, a platform that caters exclusively to marriage-minded Jewish singles. That focus on marriage distinguishes the platform and eliminates the ambiguity that can sometimes affect daters on other sites.

Ensuring Each User is Focused on Marriage

JWed Co-Founder Derek Saker created the platform as a place to enable and empower Jewish singles to meet and date. The site attracts people who want to find partners who share their same ethnic and religious heritage. JWed users want to get married, not just date casually or hook up, which is a common concern for Jewish singles who have tried secular dating sites.

JWed has also increased its membership in the age of social distancing. That may be because singles have recognized just how much they want a partner by their side.

“When times like now are especially distressing in the world, the challenges of being alone are compounded for many and only further motivate those who are marriage-minded, to finding their soulmate,” he said.

Many individuals who never expected to date online have turned to JWed. Some say they believed that they’d meet partners through friends, family, or at their synagogues. But with so many of the traditional meeting avenues temporarily shut down, more singles have turned to JWed.

“In these times, there’s no question that many people are crossing the rubicon and going online to date,” said Derek.

JWed remains a place for singles interested in marriage to find partners with the same goals. Its users must affirm that they’re both Jewish and interested in finding someone to marry when they sign up. Once on the site, singles can connect with thousands of JWed users worldwide.

The platform attracts people who know what they are looking for and geographically, how flexible they may be in moving out of state, or to another country, Derek said. For instance, while some JWed couples met in the same city or state, many have moved cross-country to be with their special someone.

“Our members are sincere in finding their soulmate for life, and geography/location is very often a secondary consideration,” said Derek.

Tons of Tools and Features to Attract Like-Minded People

As the COVID-19 pandemic has brought many social activities to a standstill, JWed has started promoting a useful feature — video dating. In March 2020, JWed rolled out its Virtual Dating initiative that allows users to video chat with others on the JWed app.

This form of dating is helpful not only during quarantine but also for those who want to get to know others from afar.

But putting your best self on video isn’t always easy. For instance, lighting, screen placement, and outside noises can all make an impression.

That’s why JWed helps users learn how to approach this modern form of dating.

JWed users can read the many success stories of other members on the site’s blog.

For instance, dating expert Julie Spira hosted an August webinar called “Dating in a Pandemic: Summer Edition” through the platform, he said.

JWed’s Instagram is also home to ideas that inspire users.

If someone wants to change their routine, they could plan a virtual date where they play an online game or visit a virtual museum.

The JWed team also offers other lighthearted suggestions, including a video dating bingo sheet that includes “had a pet interrupt the call” and “seen a messy room in the background.”

Users can learn from the journeys of others through JWed Success Stories. Those stories show couples of all ages and ethnicities who met on JWed and fell in love.

JWed users are interested in finding Jewish partners to marry, but that doesn’t mean the platform is only for young people seeking their first spouse. Instead, like Brad and Betty, many users have been married before.

Women are also given more control in meeting men than they would be in more traditional settings. Derek said that, in the Jewish world, men sometimes have checklists of qualities they desire in potential partners. If women don’t meet those expectations, men won’t always consider dating them.

“JWed enables singles to take control and initiate, particularly women. Around 65% of our marriages are initiated by women, and the woman is the one who sends the initial email,” Derek said.

JWed also strives to promote an authenticity that other platforms may not. That’s why the platform encourages users to post current photos that show their current appearance. If users are interested in starting a long-term relationship based on trust, they should be truthful about their appearance.

That environment of women’s empowerment, authenticity, and a marriage mindset has made JWed a popular place for like-minded Jewish singles.

“JWed recently celebrated the milestone of 3,500 married through the service, which averages 8 marriages every month,” Derek said.