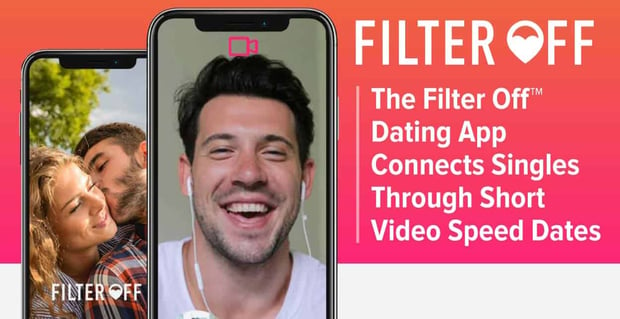 The Short Version: Online daters are well-versed these days: Join a dating site or mobile app that finds matches for you or swipe left or right to search for matches on your own. Then comes chatting and setting up a real-life date — but, even with all that, it can be hard to know if someone is worth all the effort. The Filter Off app uses 90-second video dates that save daters many of those unnecessary steps and can quickly identify whether chemistry exists between two people. The app matches members based on their preferences and sends invitations for a handful of video speed dates each week. Daters will quickly find out if they’ve hit it off — no filter required.

Single men and women typically have specific attributes they look for when it comes to dates. Whether they’re using an online dating app or looking around a brick-and-mortar café, most have an idea of who they think would be an interesting date — or even a long-term partner.

One Scientific American study asked singles to list the qualities they look for in a partner, and many respondents said they desired a person who can make them laugh or feel good about themselves. The problem is those characteristics are difficult to judge quickly through profiles and pictures on dating platforms.

Filter Off sets singles up on three 90-second video dates each week.

Zach Schleien found an innovative way to solve that problem. He built Filter Off, an app that sets users up on a series of 90-second video dates each week. After that quick chat, users decide whether they’re interested in meeting in real life. If both parties agree, it’s a date.

Since daters are often busy, Filter Off allows them to connect with singles they may not otherwise meet. But it also lets them cut right to the question of real-life compatibility.

According to Zach, it often only takes a few seconds for users to decide whether you like someone or not.

The app is currently available in the New York City region, and Zach said he plans to expand it soon. He continues to add features to make the app a safer and more exciting experience.

Inspired by Years of Dating App Reviews and Feedback

A few years ago, Zach started a blog called TopRomp.com. On the site, he reviewed dating apps and offered tips and hacks for millennials. He enjoyed learning about the industry and seeing how different platforms helped users form connections.

But he came to realize that dating apps, in general, shared a common flaw. It’s impossible to know if someone is a good fit based solely on an online profile. He realized that singles often took a lot of time to search for a match, chat with the person, plan a date, and meet up — only to discover that there’s no chemistry.

That’s why he developed Filter Off to disrupt that dynamic. The app is similar to video speed dating. Every Friday, Saturday, and Sunday night, users are set up on three 90-second dates through the app. They receive text messages throughout the day to remind them.

The dates are set up based on user preferences, including gender, religion, and ethnicity. Singles can easily add dates to their calendar so they are sure they’re available for the video meet-ups. After each date, users decide whether they’d like to see the person again.

“My goal is to create the best online dating experience possible. We’re only in New York City right now, but our goal is to expand to many other cities as well,” he said.

Zach said that Filter Off — available on iOS and Android — primarily attracts two types of daters. First, he said he sees plenty of busy professionals signing up for the app. Those daters often don’t have time to endlessly engage in chats with people who may not have any interest in actually going out.

The other type of dater is someone who has become discouraged by other dating apps that are filled with uninspiring profiles and inaccurate representations. They’re also not interested in paying the substantial monthly fees that come with some of the larger dating websites, so they are seeking an alternative.

“Face-to-face video is the most authentic way to connect with someone and see if you’re a good fit with that person,” Zach said.

The app reminds users of upcoming video dates and provides them with profiles to browse before connecting.

The sign-up process is also different for men and women — for safety purposes. Women can sign up at any time, but men must receive a referral from a woman on the app. So, the man sends a referral code to a female friend who will download the app, sign up, and enter his code so he can start making video dates.

When the app schedules dates, users can only see a blurred picture of the person. That discourages users from treating it like another swiping app.

Instead of a gallery of photos, users see fun facts about the other person. That gives users something to talk about and a little insight into the other person before the video date.

Another critical safety mechanism is that everything on the app is encrypted.

And it’s easy to report someone for lewd or inappropriate conduct during the date. If that’s the case, the person will be kicked off the app, Zach said. It also helps that the accounts link to Facebook, so it’s less likely that fake profiles will get in the mix.

Filter Off connects people in new ways, and it continues to put new safeguards in place to ensure its video dates remain positive experiences. Zach said he is especially careful about providing app users with positive experiences, which is why he owns another company that focuses on mental health. He said he often sees the connection between peer-to-peer support, mental health, and healthy dating experiences.

“I think it’s awesome what we’ve done, but I’m also interested in how we can continue to create the best experience,” he said. “It stems from connection and meeting someone who you may not otherwise have met. And people communicate differently face to face.”

The Filter Off app allows users to avoid catfishing altogether by connecting them with genuine daters.

Zach said he’s always working on new ways to improve the experience. For example, he found that when people receive texts instead of notifications, they were more likely to opt-in for the date. He’s also looking at ways to help people remember to show up on time for their scheduled video connection.

He is also considering following the model that Open Table uses: If you don’t show up for a reservation, you get a warning. The second time, you’re booted from the app.

However, if you’re stuck on the subway, he wants to provide a way for people to let their date know they need a few more minutes. All of those improvements are happening thanks to feedback from users.

“We’re constantly speaking with our users so we can build new features to improve the app,” he said. “And we are blending real life with technology.”