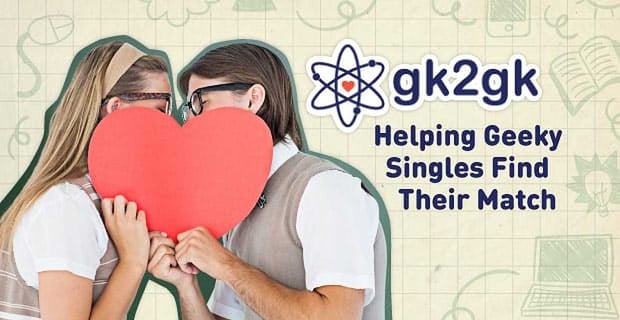 The Short Version: With shows like “The Big Bang Theory” and games like World of Warcraft growing in popularity almost every day, it’s no longer an insult to call someone a geek. In fact, most people today would probably take it as a compliment. That’s especially true of the folks at gk2gk.com, a dating site that encourages singles to embrace their inner geek, nerd, or dork and helps them find their perfect match — because every Han Solo needs his Leia (and vice versa).

I was 12 years old when I first read “Harry Potter and the Sorcerer’s Stone,” and I got so into it that I finished the book in less than a day.

My love for the story about The Boy Who Lived has only grown deeper as the years have gone by. I remember waiting in line with my sister at Barnes and Noble for the release of “Goblet of Fire” and going to the midnight showing of “Order of the Phoenix.” I have a lightning bolt tattoo and a Harry Potter playlist on Spotify. I go to Harry Potter Weekend at Universal Studios every January (proudly wearing my Slytherin colors!) and watch the marathons whenever they’re on TV.

gk2gk is the original dating site for single geeks, nerds, and dorks to find each other.

Like millions of others, I grew up with Harry, Ron, and Hermione, and their journey has impacted my life in so many ways. Whether it’s Harry Potter or another book, movie, or video game, being passionate about an interest often shapes who people are, who they’re friends with, and even who they date — and no one understands that more than gk2gk.com.

Founded in 2004, gk2gk is the original dating site for single geeks, dorks, and nerds (no matter if they’re into Star Wars, Anime, or Cosplay) to find like-minded people for friendship, a date, a relationship, or even marriage.

To get a glimpse into the fun, unique world of gk2gk and the equally geeky people behind the site, we reached out to Senior Affiliate Manager Erica Roth, who shared all the details with us.

“Mingle” & Other Interactive Features Encourage Singles to Open Up

The gk2gk sign-up is a familiar one: it only takes 2 minutes to create a profile with basic info like your age, gender, appearance, and ideal date. However, gk2gk takes it a step further by asking members to categorize themselves as a “music lover,” “sporty,” “artistic,” or several other geeky yet affectionate terms.

There’s even a section in your profile for answering more questions like “If you could do lunch with anyone, who would it be and why?” “What’s Your Favorite Board Game?” or creating a question of your own, which are used in the matching process. You’re also encouraged to include keywords in your profile for better matching (e.g., “Larping,” “Dungeons & Dragons,” or “Sailor Moon.” The goal is to personalize them as much as you can.

gk2gk matches members based on answers to questions like “What’s your favorite board game?”

What gk2gk also excels at is its interactive features such as Mingle, a carousel of matches that asks “Would you go on a date with him/her?” Say no and you’re shown another profile. Say yes and you’re given more information about the person and can send them an answer to one of your questions to get to know each other even more.

Through this one-of-a-kind system, gk2gk is able to learn from its members’ on-site behaviors and create fun, offline-like interactions that ultimately lead to better connections.

“The interactive features on the site really get you to open up,” Erica said.

The Inspiration Behind gk2gk — Geeks Helping Other Geeks

Spencer Koppel got the idea for a geek-specific dating site in 2004 after going through a divorce. Newly single and a self-proclaimed geek, Spencer was frustrated with the lack options for people like him who were into computers, crossword puzzles, comic books, and similar hobbies — and who didn’t put emphasis on appearance and social status.

“Looks are not important in terms of who I would be interested in,” Spencer told ChicagoReader.com. “It’s more, do we have common interests? Do we read the same kind of books?”

He expressed his frustrations to his daughter, Laina, who suggested he take matters into his own hands, so he did and launched gk2gk soon after.

In 2015, Spencer passed the gk2gk baton on to Avalanche LLC, a company that builds and markets successful sites like his (its first launch being Date.com in 1997 on Valentine’s Day). Avalanche now has over 20 mainstream and niche sites in the dating industry, with a combined 5 million+ registered members (2 million on gk2gk alone) in more than 100 countries and 100,000 new singles joining every month.

“We love being in the love business,” their motto says.

Behind the impressive numbers is a team that’s just as geeky as the people they help. When they’re not doing things like attending Comi-Con together, they’re having fun with their individual geeky interests — such as CEO Meir Stralhberg watches “Star Trek,” CFO Peder Sahlin practices photography and knows the value of a good Hawaiian shirt, and Director of Marketing Carlos Ealdama collects vintage sneakers.

“I am, in particular, a movie buff,” Erica added.

gk2gk has transformed the online dating scene for geeks, and as a fellow geek, I really admire that. A geek is simply someone who is passionate about something — whether it’s a man playing WoW, a woman obsessing over Harry Potter, or a group of people reveling in their shared interest. We all just want to meet someone special who gets us, and gk2gk is streamlining that process.

“‘Geek’ is a pretty broad term, so it can mean different types of people, whether they’re tech savvy or interested in science fiction or online gaming or comics. Even though gk2gk is a niche dating site, there’s a broad range of options within that niche,” Erica said.

In that same vein, Erica added that the goal for gk2gk is to continue reaching a bigger, more diverse audience, especially in terms of attracting even more women.

“We really want to get more females into the system so it’s an even playing field and people have a better user experience,” she said.