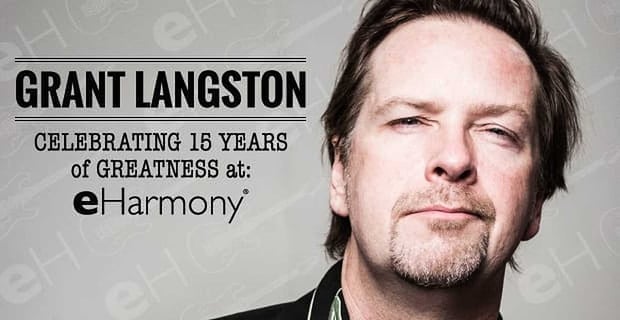 The 411: Through his passion and dedication, not to mention 15 years of hard work, Grant Langston has played a significant role in making eHarmony the online dating powerhouse it is today.

Growing up in Hartselle, Alabama, Grant Langston never dreamed that he would work at an online dating company, let alone the biggest one in the world, but sometimes greatness comes when and where you least expect it.

That greatness began in the late ’90s when Langston decided to take a chance on a then-startup known as eHarmony, with the intention of working on marketing content for only six months.

More than a decade later, Langston is still at eHarmony and is just as committed to helping the company succeed as he was from day one.

The renaissance man of eHarmony

Although Langston’s current title is Vice President of Brand Marketing, he’s held a wide variety of positions at the company thanks to the collaborative atmosphere.

From writing content, to running social media, to promoting new products, to starting eHarmony’s online magazine, to helping with customer service, putting his all into the job has always come first.

From writing content to promoting new products, putting his all into the job always comes first.

“It’s been an evolving role, but I think at every turn, the changes have made sense,” he said. “Now I feel like I’ve been involved with every part of the business, and that’s been great for me.”

Having launched in 2000 with a scientific approach to matching, eHarmony is known as one of the first sites to change people’s assumptions that online dating is for hookups, but Langston is a little more modest about his individual contributions, especially when it comes to his part in humanizing the brand.

“We always want to take our jobs seriously — what we’re doing for our users — but we don’t want to take ourselves too seriously,” he said. “When I took over creative brand positioning, one of the first things I wanted to do was lighten things up. The message is still the same, because our values are still the same, but we just want to approach it with a little wink and a smile.”

His contagious passion for life

Not only is Langston passionate about what he does at eHarmony, but he’s also passionate about his hobbies and family life, as well as bringing an artistic spirit to everything he does, whether it’s playing in his Americana band (his new record comes out March 23!), visiting the park with his wife and kids or launching a new campaign at work.

“I think being an artist is a very important part of my job here at eHarmony,” he said. “If I have to write a song and I have to solve a work issue and I have to deal with this or that, the creative force that gets all that done feels like the same thing.”

And according to Langston, it all really does come down to balance.

“I’m aware that a life that is too unbalanced in one area isn’t going to be much fun,” he said. “I can’t put that stuff on a shelf and still be Grant. I want my children to know me and not some pale version of me, so it’s important for me to keep things in play that I’m passionate about.”

What the next 15 years hold

Being with eHarmony for more than a decade, Langston knows what works and what doesn’t, which is why the team will continue doing what they do best — only better as each day, week, month and year goes by!

For this year, two big initiatives are:

But for Langston, it’s more than just creating the funnest product or going along with the latest fad. It’s about the efficacy of the matching.

I think Langston would agree with me when I say I can’t wait to see what the next 15 years hold.