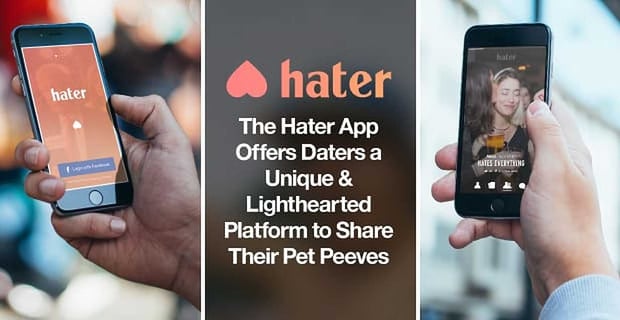 The Short Version: On the dating app Hater, singles can dispense with superficial pleasantries and discuss the things that really matter: stuff you hate. Your pet peeves can actually bring you closer to someone on Hater. It’s hard to hate on such a unique and playful concept. Available in the App Store, this pioneering dating app matches people who disapprove of the same foods, movies, celebrities, social issues, and other topics. Since the app launched in February 2017, Hater has exploded in popularity with over 400,000 downloads internationally. Hater invites complainers, skeptics, jesters, and, of course, haters of all kinds to express their opinions in an open and honest forum. By taking a stand against Justin Bieber or cargo pants, you can bond with singles who understand your annoyances and share your passions.

On the typical dating site, most profiles highlight positive traits and downplay anything negative or controversial. Which means dealbreakers can be hard to spot right away. It can be frustrating to spend a lot of time chatting with someone on a dating app only to find out they’re a cat person, or a Trump supporter, or a hipster, or a slow walker — or whatever it is you loathe.

I once talked to a guy for months before he let it slip that he hates eating at restaurants and going to see movies. I can’t date someone like that!

Politeness often keeps daters from talking about things they hate, but those biases are an important part of a couple’s long-term compatibility. I mean, you don’t want to get down on one knee only to hear your love interest say “Oh, I hate marriage. Didn’t you know that?”

The Hater dating app promotes honesty in online dating and encourages singles to come together over their mutual disgust for things like Chick-fil-A and airplane seats. In 2016, the app’s Founder Brendan Alper started developing Hater as a fun and efficient solution for mobile daters worldwide. Currently, Hater is available exclusively in the App Store, but the Android version is set to be released in the coming months.

Brendan told us his inspiration for a hate-based dating app came from his personal experiences as a single 20-something on dating apps and sites. He found a segmented world where relationship-oriented dating websites focused on exhaustive personality profiles, while Tinder-style casual dating apps cultivated a fast-moving and shallow space. The former approach sapped the fun out of the dating process, while the latter highlighted snap judgments over personality. Brendan thought he could do better, so he created Hater.

Hater is the first dating app to match users based on mutual hates as well as likes.

Hater’s humorous premise intrigues daters, and the app’s functionality keeps them engaged. Combining a fun interface with rich personality assessments, Hater matches users based on their ratings of thousands of topics that range from “Asking for directions” to “Zombie movies.” All in all, singles don’t seem to hate this snarky app.

Since its launch in February 2017, the Hater app has grown rapidly and gained an international following of more than 400,000 users. The majority of users are millennials between the ages 25 and 35. Their biggest stronghold is in New York City where sharp-tongued singles groan over politics and find solidarity in their hatred for phonies, among other things. With its unique format, Hater offers more than simply swiping on faces — you swipe on ideas and connect with people through common beliefs, biases, and opinions.

“I think people are tired of the lovey-dovey branding of most dating apps and sites. They’re all kind of the same,” Brendan explained. “Hater spices things up a bit by allowing you to hate things and allowing that to be part of the conversation.”

Hater brings something new to the dating space — hate. Here, daters don’t put on a happy face and hide their disgruntlement or disgust. Instead, daters enjoy a revealing look into personal interests and lack of interest. The app has more than 3,000 topics for mobile daters to hate on. Soon, the designers hope to make the topics user-generated, basically creating an unlimited treasure trove of annoyances for users.

This lighthearted system offers valuable information to anyone looking to get to know a stranger on a dating app. For instance, if your date loves breaking up with people and hates saying I love you, Hater can tell you that upfront.

The Hater app invites users to proudly state their opinions on things like going to church.

Here’s how it works — you see a topic (slow walkers, Taylor Swift, Harry Potter, cilantro, Donald Trump) and swipe to express an opinion about it. The emojis will guide you to swipe up for love, down for hate, left for dislike, or right for like (or tap the screen to make a neutral vote). You can also see the percentage breakdown of everyone else’s answers, so you can always follow the herd if you’re unsure.

You can rate as many topics as you like on Hater, and your answers will be visible to anyone who answered the same way you did. Through a fun interface, the app tackles the important questions — like, do you hate “The Bachelor”? — and invites conversation about a variety of serious and silly topics.

Finally, daters have an outlet to express their feelings about mansplaining, butt selfies, picky eaters, social media, and pierced nipples. Your answers can actually help you find compatible dates on the app because Hater’s match algorithm uses all that data to pair up singles who share similar passions and hatreds.

Hater isn’t about hate speech or personal vitriol — it’s about acknowledging that turn-offs are just as important as turn-ons in relationships. With this fresh take on what brings singles together, the dating app focuses on interests over looks to help singles converse and establish strong personal connections.

“We want to make Hater for everybody,” Brendan said. “Hater was designed to put personality first because science showed that people bond and form more intimate connections over things they hate than things they like and love.”

With fun and interactive features, Hater does everything possible to connect singles in meaningful ways. For example, let’s say you’ve used the app to find someone who hates the Yankees and tofu as much as you do, but then maybe you don’t know what to say to that carnivorous Red Sox fan. Hater can help with that.

The app’s icebreaker game, called Hater Cards, prompts you to joke around with a new acquaintance. The card will say something like “I love you like Kanye loves ___!” or “Obama’s final act as president was to ban ___.” And you fill in the blank with whatever option seems appropriate or funny to you. You can then send the completed card in a private message to another user. Brendan compared the game to Cards Against Humanity and said it’s a great tool for starting a conversation and sharing a laugh with someone.

“It’s meant to start conversations on the app,” he said. “The initiation of conversation is a problem we’re really trying to tackle.”

True to its amusing and innovative premise, Hater opens daters up to all sorts of fun ways to interact. Already the app has made some successful matches in real life by giving singles an outlet to find mutual attraction based on mutual hatreds.

Earlier this year, one couple came together over their shared disdain for the Super Bowl and love of queso. They planned a date on the night of the Super Bowl, popped in a movie, heated up some homemade queso, and enjoyed one another’s nonconformist company thanks to the Hater app.

Brendan told us his friend met someone on Hater, and the connection soon developed into a serious relationship. “That was the moment where it all felt real to me,” Brendan said. “It feels good to have that kind of impact on people’s lives.”

The idea of finding love through hate is just plain intriguing. In 2016, Brendan dreamed up a hypothetical dating app where cynical singles bonded by griping about the same things. After doing a little digging, he found academic research to support the notion that mutual dislike unified people in lasting ways. According to one study, the affinity you feel for a close friend or partner may have more to do with sharing negative attitudes than positive vibes.

Hater began as a joke, but the app’s success is no laughing matter. It’s cheeky approach to mobile dating has made a huge splash in the dating scene from Los Angeles to Oslo, Norway.

Today, Hater is run by a lean team of quirky individuals. From his home in NYC, Brendan directs three full-time staffers and a handful of remote developers and consultants based in Philadelphia, San Francisco, and India.

Founded on an open working environment, Hater employees are given the chance to choose their own salaries, hours, and vacation times. Brendan also prioritizes daily habits like meditating, exercising, and journaling to keep everyone refreshed and focused throughout the workday.

“The app’s culture reflects our culture,” Brendan told us. “We’re very open-minded and transparent. That’s just how I operate.”

Transparency is at the center of everything Hater stands for. From opinions on silly social issues like Adam Sandler movies and swag to serious current issues like abortion and all lives matter, Hater provides a full and nuanced look into what your date thinks and how well you’ll get along.

A Revolutionary Social App Where Haters Can Come Together

In the dating scene, having stuff in common is pretty crucial. For one thing, it gives you something to talk about and something to do together. I don’t know what dating is like without going out to dinners and seeing movies in the theater — and I don’t plan to find out. However, most bare-bones dating profiles focus on basic stats and likes, leaving out any potentially divisive opinions.

Sure, maybe disliking oatmeal raisin cookies isn’t going to be a dealbreaker for anyone, but what about loving guns or hating vegans? These viewpoints matter and can affect dating compatibility.

On Hater, singles proudly display their positive and negative biases on their profiles. Whether you despise Daylight Savings Time or snuggling, this dating app offers an entertaining platform where you can air your grievances as a way of attracting date prospects.  The clean mobile interface shows daters where their interests and disinterests are in alignment, so it’s easy to start a conversation and find common ground over common hates.

“Hater is about wearing your heart on your sleeve and being upfront with people about who you are.” — Brendan Alper, Founder of Hater

Full of interesting data points and interactive features, Hater offers an engaging social space to discuss hot topics and make fast friends with people who already agree with you. Plus, the low-pressure platform isn’t all about dating — it can be a fun activity for anyone looking to socialize and pass the time on their phones.

“Dating felt so serious and binary,” Brendan said. “Our goal with Hater is to make an experience like a bar, not necessarily all about relationships and dating, but just a fun and lighthearted experience.”