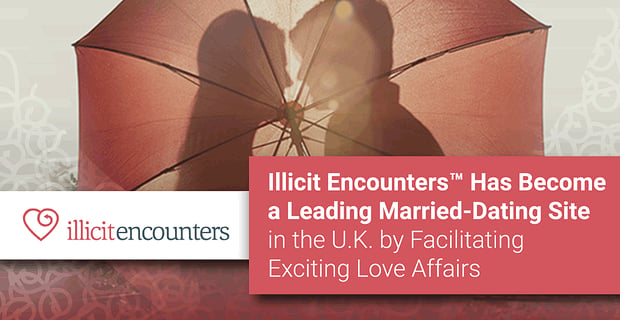 Illicit Encounters™ Has Become a Leading Married-Dating Site in the U.K. by Facilitating Exciting Love Affairs

The Short Version: Stephen Lines founded Illicit Encounters in 2003 to give Britain’s married population a safe and discreet place to find a hot date. This nonjudgmental dating site took off in popularity and has seen over 1.2 million registrations with thousands more joining every day. Today, Illicit Encounters is one of the largest and longest running dating sites for married men and women in the U.K.

IllicitEncounters.com launched in 2003 as a general dating site for sexy singles. Over time, however, the U.K.-based team saw an opportunity to expand its services to reach people in relationships. Founder Stephen Lines recognized that many married folks yearned to connect with a hot date yet had no avenue to do so safely and honestly, so he decided to do something to help them.

Within a few years, Illicit Encounters had become a go-to married-dating site in the U.K. The site currently has over 1.2 million members, and it’s growing larger every day.

“Our mission is to facilitate real, meaningful connections, and we do that very well,” said Christian Grant, the Public Relations Manager for Illicit Encounters. “Illicit Encounters provides a safe and discreet space for married people to explore their extramarital options.”

It’s liberating to join a dating site where you don’t have to lie about your relationship status or worry that others will judge your choices. Everyone on Illicit Encounters is looking for a discreet affair to shake up their daily routines.

“The secret to our success is the simplicity of it. No fancy algorithms. No bells and whistles. Just a safe space to look for like-minded individuals,” Christian said. “The real magic happens when you reach out and a real person who is in a similar position to yourself responds.”

You can sign up for Illicit Encounters for free and start searching for a date by area, age range, gender, and other basic criteria. Users go by a username on the website, so there’s a layer of anonymity that protects individuals in committed relationships. Illicit Encounters has made online privacy a high priority and never shares its members’ personal data with any third-party group. You can read over its privacy policy here.

The Illicit Encounters platform caters to all attached men and women. Anyone in a relationship, whether they’re just dating or amicably separated, can create a profile on the married-dating site to rejuvenate their love lives. Singles seeking a married partner are also welcome to join.

A majority of Illicit Encounters users are in their late 30s to early 50s. These folks have been around the relationship block once or twice and are ready for something new. Christian told us the married-dating site is growing larger all the time and sees thousands of registrations in a single day.

Illicit Encounters members can browse under a username and a stock photo to protect their privacy.

Illicit Encounters has over 1.2 million members who are active on the site and exchange tens of thousands of messages each day. Those flirtatious encounters can lead to online friendships, no-strings-attached sex, or long-term relationships. It’s up to members to decide what works for them and create their own relationship rules.

Joining Illicit Encounters can give married men and women a secret thrill and a renewed confidence in their own desirability. The platform empowers individuals to pursue their desires freely and openly, and that’s enticing to anyone feeling trapped by a monogamous relationship.

“The community as a whole is very respectful and kind,” Christian said. “The vast majority of our members are seeking a meaningful and fulfilling experience.”

Illicit Encounters fosters an open-minded atmosphere both online and offline. Its core principle is that people should be free to do as they please, and that mindset is reflected in its workspace. Illicit Encounters has an open office plan in the U.K. Everyone from the tech team to the PR department work side by side.

“Everyone is encouraged to participate in discussions, to put forward ideas for the business, and to generally engage with one another,” Christian said. “We have a great team.”

A moderator must review and approve every new profile before it goes live on the dating site.

The Illicit Encounters CEO works closely alongside the team in this office space and fosters an inclusive atmosphere where coworkers feel invested in the company and its future. The CEO’s entrepreneurial spirit has allowed the married-dating site to be flexible to a changing dating environment and adapt to the needs of modern daters.

A majority of Illicit Encounters team members are Customer Support Representatives who moderate profiles, address customer concerns, and generally support the user base. The upbeat company culture has been Illicit Encounters’ secret to success for over a decade.

“It is a relaxed space that nurtures creativity and innovation, which is why we are still the leading married-dating website in the U.K.,” Christian explained.

Testimonials Speak to the Joys of Stepping Outside Monogamy

Many Illicit Encounters members have found love affairs on the site, and many return after that affair has ended to have another go round. Over time, Illicit Encounters has established its worth to the dating community, and hundreds of users sing its praises.

Reviewers have given Illicit Encounters three stars on Trust Pilot, and the user stories page is packed with positive reviews. Some say they’ve met hundreds of love interests on the site, while others say they’ve met a special someone and started a relationship.

Whether you’re looking for a short-term date or long-term love, Illicit Encounters can help you keep your secrets.

Christian said one of his favorite testimonials came from a woman named Julie. Her Illicit Encounters membership was short but sweet. Five days after she created her account, she met a man who sparked her interest. They started a love affair that has lasted four years and is still going strong.

“We are totally besotted with each other,” Julie said in her testimonial. “Thank you! I feel the luckiest girl in the world.”

Michael, a married man in West Sussex, said joining Illicit Encounters has actually helped his marriage. “It has almost certainly allowed us to both remain happy and married, rather than just married,” he said.

Other members say the dating site has freed them to be honest about what they want in life and they have found happiness by following their hearts. “Thank goodness for Illicit Encounters,” wrote Angela in a review. “You’ve given me the tools to enhance my life, and I’m having a ball.”

The Illicit Encounters team prides itself on facilitating all sorts of romantic connections, some that last a lifetime and others that last an evening.

“It is satisfying work,” Christian said. “I personally don’t believe that humans are meant to be monogamous — we are objectively terrible at it — so seeing people live their best lives and take control of their own personal happiness is very rewarding.”

Explore Your Options on Illicit Encounters

Around 10 years ago, Illicit Encounters pivoted to meet the needs of the married dating market, and it has exploded in popularity as a result. Many attached daters in the U.K. appreciate the opportunity to chase their dreams and realize their fantasies on a safe and private platform.

Illicit Encounters has facilitated countless online flirtations and offline romances, and its members keep coming back for more. Members of this nonjudgmental dating site can explore the dating scene and engage in illicit affairs without hiding their relationship status.

As the online dating market continues to grow and evolve, the Illicit Encounters team works hard to keep pace and provide top-notch high-tech dating services for married men and women throughout the U.K.

“We have got some very exciting projects in the pipeline,” Christian told us. “I can’t give too much away, but we are moving toward making our services more inclusive and reflecting the shifting values of our increasingly diverse customer base.”