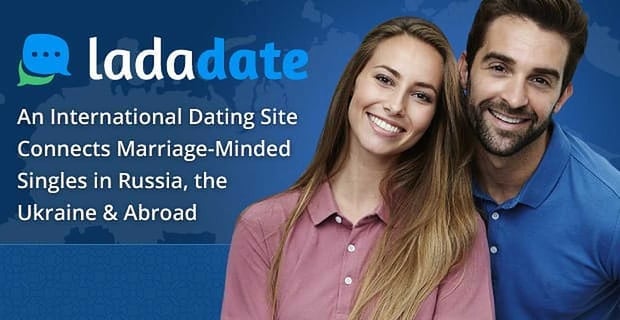 The Short Version: So many singles spend their days yearning for connection and hoping that special someone is right around the corner. But what if they’re not around the corner? What if they’re halfway around the world? How do you meet someone in another country? You go online. An international dating site called LadaDate.com connects single men with date prospects in Russia and the Ukraine. These attractive and marriage-minded women are eager to chat and build long-term relationships with men in the US, the UK, Canada, Australia, and other countries. It’s free to sign up and start browsing through the profiles of women seeking the real deal. The dating site’s credit-based system makes it easy and affordable to engage in a private chat with someone special. On LadaDate, countless singles have the opportunity to build international connections based on shared values and life goals.

According to Baltic and Slavic mythology, Lada is the goddess of beauty and fertility. She and her male counterpart, Lado, often appear in songs and stories about good harvests and happy weddings. Between the 15th century and 18th century, young girls worshiped Lada in the springtime, hoping she would bring them a strong husband, a fertile womb, or simply good fortune. Over time, Lada became synonymous with love, peace, and femininity.

What better name for a dating site? LadaDate.com pays tribute to the ancient love goddess by naming its dating service after her. The international platform introduces marriage-minded singles to one another and facilitates the online courting of Eastern European women. Its name speaks to its Slavic roots.

On LadaDate, single men can sign up for free and browse the profiles of attractive women in Russia and the Ukraine. The straightforward dating site creates instant connections between men and women interested in finding their soul mates. It’s a no-pressure way to make a match with someone living abroad. If you see a woman worth getting to know, you can pay for credits to start a conversation and see where things go.

“Our mission is to build relationships between people,” said a LadaDate spokesperson. “In the world, many people are alone, and we want help them to find a partner.”

Signing up for LadaDate is really simple. It takes less than five minutes to put in your information (name, email, birthday, and password) and create a profile. You can log in via Facebook to make the process go even faster. LadaDate links to social media profiles to verify members’ identities and streamline the sign-up process by pulling information and pictures from an existing account. Note: Only men can create an account.

You don’t have to sign up to view profiles, but only members can initiate live chats and engage in a private correspondence with someone special. Men can create a profile for free, and sending messages or gifts will cost them a little extra. Eastern European women can communicate for free, and the dating site’s team promises single men an unbelievably high response rate.

LadaDate introduces single men to attractive women in the Ukraine and Russia.e

Single men come from all over the world to mingle with Russian and Ukrainian women on LadaDate. According to the site’s internal statistics, a majority of users are from English-speaking countries, including the US, Australia, Canada, and parts of Europe. A fair number of men from South Korea and Japan have signed up as well.

A lot of dating sites stop members from communicating with one another unless they’ve committed to a monthly subscription. Until you pay the toll, it’s look but don’t talk — which is frustrating for many members who don’t know if it’s worth handing over their hard-earned money to send a message to someone who may or may not answer.

LadaDate does things a little differently. It doesn’t have monthly or yearly subscriptions. Instead, members pay per message or feature. For instance, sending an outgoing letter costs seven credits and viewing a video clip costs 10 credits. One credit is worth roughly 39 cents.

LadaDate is free for women, and single men can create a profile for free and use credits to start chatting.

On LadaDate, you only have to pay for the features you want to actually use. This simple and affordable system helps singles prioritize what they want and build genuine connections online. One minute of live messages costs only one credit, so it’s easy to introduce yourself to the international community and see if anyone catches your eye.

If you find yourself drawn to a particular person, you can choose to send her a gifton the site, and the system will send you a photo receipt of the delivery.

“The internet provides an opportunity for all who cannot build communication in real life to realize it in a virtual world,” said the spokesperson. “We provide paid service, and, by our rules, any client should have a guaranteed service.”

A Small Team With Big Expectations for the Future

LadaDate empowers individual team members to take initiative and be the leader of their own work projects. Their combined creativity and collaboration have helped turn the independent site into a go-to resource for thousands of singles around the world.

“Currently, we’re not big, but we’re a growing company and may be expanding our team in the future,” the spokesperson said. “We have a very diverse creative team. Each team member сan realize his or her own vision with us.”

“Our mission is to build relationships between people. In the world, many people are alone, and we want help them to find a partner.” — A LadaDate spokesperson

LadaDate is still new in the dating industry, but it’s grown by leaps and bounds by forging working relationships with reputable marriage agencies.

In the future, the team hopes to expand its global user base and upgrade its online tools to provide match suggestions based on a high-tech algorithm. The LadaDate spokesperson said location-based matching, video streaming, and supporting cryptocurrency are also currently in the works as the dating platform continues to grow in popularity.

LadaDate’s private chat features enable singles to go after the kind of relationship they want. This fast-growing network brings date prospects from around the world to your computer screen, so you don’t have to feel lonely or disconnected on a Saturday night. The dating site uses the power of the internet to connect men and women around the world in a user-friendly and safe interface.

All you have to do is sign up, browse through eye-catching dating profiles, and message any woman who stands out to you. Much like the goddess it’s named after, LadaDate promises to improve the lives of men and women and bring more love into the world.

You can count on the site to be discreet while introducing you to friendly and flirty people across the globe. “Our main goal is privacy,” the spokesperson said. “Many clients want to communicate in privacy, and many don’t share their stories with us, but we know they happen.”