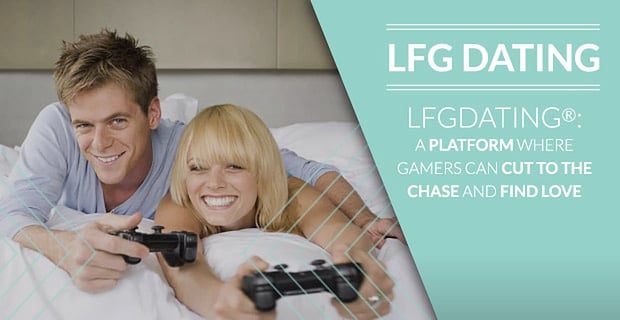 LFGdating®: A Platform Where Gamers Can Cut to the Chase and Find Love

The Short Version: LFGdating.com is the kind of gamer dating site that Co-Founders Casey Tebo and Patrick Rafferty wanted to see in the world when they were single. After years of finding these niche dating sites to be cheesy and unprofessional, they decided to take the leap and develop their own version. The result was LFGdating. In contrast to the over-the-top sites that turned Casey and Patrick off, LFGdating is realistic, sophisticated, fun, streamlined, and easy to use.

When LFGdating.com Co-Founders Casey Tebo and Patrick Rafferty were single and interested in meeting fellow gamers, they turned to gaming-focused dating sites. But what they discovered about those sites is that most of them were unprofessional and corny. They felt as though they could make a better option themselves.

“LFGdating organically sprouted from our want to provide others with something neither of us had back then: a clean, tasteful dating site for mature gamers,” Casey said.

Casey, who was a high school teacher and coach at the time, had a big decision to make. He could either stay at his job, or he could cut back and develop a one-of-a-kind dating site with Patrick. When Patrick asked if Casey was really serious about this, Casey said he was.

At that point, they both knew they couldn’t timidly venture into this project. They had to sincerely commit. From there, LFGdating began taking shape. The friends created a business plan in 2010 and officially launched the site in 2012.

Casey Tebo and Patrick Rafferty created LFGdating because they couldn’t find a gamer dating site that truly met their needs.

“As we started to flesh everything out, we realized our passion was LFGdating,” Casey said. “I was spending three to four hours a night working on our algorithm, site navigation, page text, and the overall feel of LFGdating.”

The site continued to grow over the next six years, attracting gamers who wanted to combat the stereotypes they often faced.

Founders Patrick and Casey Built the Site Based on Experience

LFGdating became the kind of dating site that Casey and Patrick sought when they were interested in online dating. Gamers can use the site to find one another, but, as Casey notes, “the gaming aspect doesn’t smash them in the face.” LFGdating isn’t silly or immature; it’s designed with professional users with multiple interests in mind.

Most of all, the founders attribute LFGdating’s success to the fact that they understand their users.

“I’m in my mid-30s, and my wife is in her upper 20s,” Casey said. “We connect with many of our users because we’re a part of their generation.”

While singles from their mid-20s to their late 40s are LFGdating’s prime demographic, the site attracts users across the age spectrum. The younger members are around 18, while the older members are well into their 60s. The oldest user ever registered was 86.

LFGdating does have more male than female members, but that ratio isn’t as heavily skewed toward men as one might expect. In 2012, after his first advertising campaign, Casey was sure that the site would attract more male users than female users. However, this wasn’t the case — the site garnered 101 new female members versus 99 male members.

Unique Features Include the Ability to Search by Console Played

LFGdating remains popular with single gamers because it offers them the features they truly want. While they do have to pay to use some of the premium features, unlike many other dating sites, they don’t have to pay to talk to free users or paying users who reach out to them first.

“If you pay to talk with somebody, you should be able to talk to that person,” Casey said.

LFGdating also offers other cool features like read receipts and the ability to search by gaming console or genre of game.

Recently, LFGdating even added a lifetime subscription. As free and paid features are added to the site, these users will have continual access to them all.

Casey and Patrick are proud and humbled by the fact that they help people find love.

What’s more, LFGdating’s users always have their concerns addressed in a timely manner. Both Patrick and Casey take care of most of the complaints, even if speaking with users takes up some of their own personal time.

“We’re very blessed to have the relationships we have with our wives, but we’ve both left date nights to take calls or respond to emails from members. It’s very important to feel like you are being heard,” Casey said.

“I typically use the twilight hours of 10 p.m. until midnight or 1 a.m. responding to members, building marketing campaigns, and working with our PR firm,” Casey told Global Dating Insights in an interview.

Before adding new features, too, Patrick and Casey return to their philosophy that LFGdating should retain its polished and useful feel.

“There’s never going to be all this stuff jumping out at you,” Casey said. “We want to keep it streamlined and professional.”

Currently, Casey and Patrick are working to develop an app that will provide as good an experience as the one delivered on the desktop version of LFGdating. They were even close to launching a beta version of an app when they decided against it because it didn’t meet their standards.

“We made the decision to pull the app because we didn’t think it was a great representation of LFGdating,” Casey said.

Now, though, they’ve found an independent developer they trust to create an app that they’re excited about, and it will launch soon.

Looking toward the future, Casey and Patrick will continue to ensure that every decision they make stays true to their users. LFGdating has been so successful that both men devote a lot of their time to managing and developing it.

“When working on anything, I always ask myself, ‘How is what I am doing now going to help out who will work on this next?’ I always try to keep the other people who work with me in the forefront of my mind,” Casey said. “It helps the workflow go more smoothly, and it lets others know that I am thinking of them. I think that’s important. People aren’t told enough that they’re important.”

When asked how he feels about cutting back on his teaching job to focus a little bit more on web development, Casey explains that both jobs fill a similar impulse for him: He remains instrumental in changing lives for the better.

“When we get a request to cancel a membership, I’m excited. Those requests are really cool because we can point to our platform and know that it worked,” Casey said. “We’re trying to create a better platform for people to meet. People who love to game. We tell our members daily that we’re always working on the site and that we’re always working to make them happy. If we can do those two things every day, LFGdating has the chance to be something truly special.”