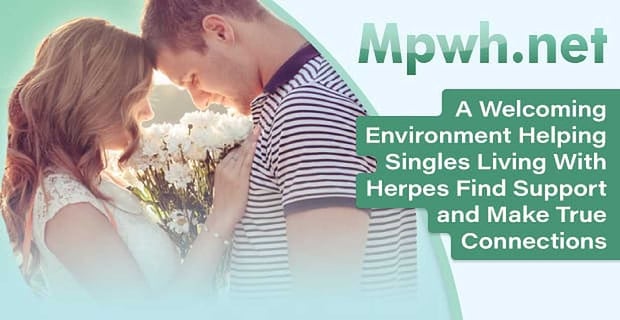 The Short Version: Navigating your way through online dating can sometimes be a difficult and intimidating task. But for singles living with the herpes simplex virus, finding love in the modern world often seems downright impossible. Fortunately, MPWH.net provides a solution for HSV daters. The site delivers a non-discriminatory environment where members can concentrate on getting to know one another rather than focusing on how to break the news of diagnoses. MPWH’s forums foster more than 120,000 conversations per day between its thousands of members. Since 2001, the site has helped members kindle bonds that have resulted in upward of 60,000 success stories. And, through its interactive message boards, blogs, and a dating service that moves at your pace, MPWH is set to continue connecting HSV positive singles well into the future.

One of the most debilitating symptoms of herpes has nothing to do with sores or muscles but, rather, with the social stigma attached to the diagnosis. This leads those living with the virus to feel isolated over a treatable disease that takes over many aspects of life — especially dating and relationships.

HSV singles can’t just meet someone and let things take their course. They have to struggle with deciding on the right time to tell a prospective partner about their diagnosis and what it means. Rejection because of the illness is an ever-present concern of HSV daters. And, if a connection is made, there’s always the worry about transmitting the virus to a partner.

The hurdles singles living with herpes have to endure are real and difficult to surmount. However, MPWH.net is helping daters overcome these hardships.

MPWH.net’s mission is to provide a non-judgmental place where people living with herpes can connect with those who they can relate to.

“Herpes is one of the most stigmatized STIs, and when people first get diagnosed with HSV, they tend to feel like their dating lives are hopeless and they’ll never be able to find someone who will be OK with their STI status,” said Jenelle Marie, MPWH’s spokesperson. “We found that providing a place where people with herpes can come to meet other people with the same infection was a great way to start dating again and to find the support that is often missing from traditional online dating platforms.”

MPWH provides a safe haven and meeting place for singles with herpes. As with similar STI dating websites, you can meet others with herpes for friendship and more without having to worry about disclosures and potential rejection due to your illness. The site offers a community-like atmosphere to discuss relevant topics and takes the social stigma out of herpes that often keeps people lonely.

Having an STI is difficult in everyday life, and it’s even harder when dating. As someone living with herpes, MPWH’s Founder learned this firsthand when she noticed there weren’t many resources for those who were recently diagnosed.

The goal in starting MPWH was to provide people with herpes a network of support that offers hope and shows them they’re not alone in their dating experience. Essentially, the site is a welcoming venue where people with an STI can meet others dealing with the same issues without the apprehension of feeling socially ostracized.

MPWH.net has lively chat rooms where users have 120,000 conversations every day.

Meeting other singles on MPWH removes the fear of rejection that often accompanies dating with HSV. There’s no more worrying about when to tell someone about your diagnosis or wondering how they will react. Since all members have herpes, dating no longer needs to have an ominous cloud overhead.

“Our site hosts more than 120,000 conversations between members each day,” Jenelle said.

These discussions take place in chat rooms, within the forum, and on the site’s popular blog. And members come from across the US, with California, Texas, Florida, New York, and Georgia topping membership numbers. Jenelle told us the demographics are fairly even across the board.

A Relationship-Building Service That Moves at Your Own Pace

Setting up a profile on MPWH is easy, and it takes members’ potential sensitivities to heart. Rather than being required to fill out pages of information about yourself, you can include only what you want until you’re ready to add more. The site takes confidentiality seriously and understands there is more to online dating than just searching through profile pictures.

Many of MPWH’s features create a comfortable environment where members can disclose personal information at their own pace. Jenelle told us about one of the site’s keys to success: the chat room.

“We offer a private photo album feature. It’s a nice way to keep members’ identities safe but to allow them to start developing a relationship,” Jenelle Marie said.

“It’s kind of like the old AOL chat rooms but faster,” she said. “It’s a very popular feature.”

In the chat room, you can get a feel for someone and decide if you’re ready to give more information in real time at your particular level of comfort.

Another notable feature is MPWH’s photo gallery. To help users feel safe, they can hide their photos until they’re ready to share.

“We offer a private photo album feature where members can choose to open their private album to certain people after they have begun to get to know them,” Jenelle said. “It’s a nice way to keep members’ identities safe but to allow them to start developing a relationship without disclosing their identity.”

MPWH boasts thousands of inspirational stories from members, which give others hope that they, too, can find friends, dates, and partners through the site.

One user said: “My first disclosure after breaking up with my giver was a success! My partner accepted my condition, and we took steps to stay safe.”

While another user wanted to remind everyone that life isn’t over just because you’ve been diagnosed: “Although it might seem like the end of the world, this is just another journey your life has challenged you with. It’s not an easy challenge to accept but surely one that will make you stronger in the end.”

In many cases, the most significant information on how to deal with certain problems comes from others who’ve experienced similar hardships. And that’s just what MPWH accomplishes.

“We have an active blog where people can share their own stories and dating observations,” Jenelle said. “There are more than 500 daily new blog topics posted. This is one of the reasons why MPWH is not just a dating site but a community website.”

These blogs give members not only an opportunity to write about topics that are important to them but that are also interesting and informative to other users.

Looking toward the future, MPWH’s goals are simple but significant.

“We’d like to continue growing our membership,” Jenelle said. “The more people who join the site, the more fun it becomes for our members, the more we’re able to help people, and the sooner someone can move past a devastating and scary diagnosis. All in all, it’s a win-win.”