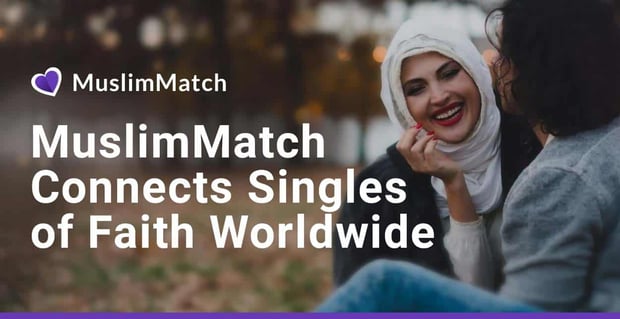 MuslimMatch: A Dating Platform That Recognizes Diversity Within the Community

The Short Version: Muslim singles often want to find partners who share their religious faith, but their country of origin can play a role in compatibility. Muslim daters in Asia may have significant cultural differences or expectations that differentiate them from Muslim daters in Europe, Latin America, or North America. That’s why a Muslim dating platform called MuslimMatch has matchmaking systems that cater to Muslim singles of different backgrounds and worldviews. The platform has region- and language-specific sites to connect singles based on more factors than religion.

Single Muslims often look for partners from the same religious background. Not only do they share an overall cultural heritage, but Islam has particular marriage traditions that can make unions outside of the faith difficult.

But not every Muslim is looking for a marriage arrangement like that.

According to a recent study titled “Marriage Role Expectation on Muslim Z-Generation,” some younger Muslims believe in those traditional marriage expectations. But others prefer more egalitarian marriages in which women work outside the home and make decisions alongside their husbands.

“The results of data analysis that has been exposed shows that marriage role expectation of Muslim adolescents from [Generation Z] is classified as egalitarian,” the study found.

The vast differences within the Muslim community stood out to Arjun Bhatia, Senior Vice President and Chief Marketing Officer of Matrimony.com. When the company studied the dating app landscape for Muslim singles, it recognized that most niche dating sites for this population painted them all with one brush.

So the company decided to launch MuslimMatch to cater to a broader audience of Muslim singles.

“The fact is that Muslim communities, while tied by a single religion consisting of multiple nationalities, ethnicities, languages, and religious beliefs. There was no player who was approaching this community with this lens,” Arjun told us.

Even if Muslim singles don’t subscribe to traditional values, they may still want a partner who understands their heritage and family expectations. MuslimMatch brings those singles together with robust search tools and region-specific sites to help users connect through faith, culture, and lifestyle.

More than 1.8 billion Muslims live around the world, with significant Muslim populations in Indonesia, India, Pakistan, Bangladesh, and Nigeria. By 2060, the Pew Research Center estimates that the global Muslim population will grow to 3 billion because Muslims are younger and have more children than members of other religious groups.

“The 2060 lists for Muslims and Christians are also expected to change in other ways. By 2060, India is expected to supplant Indonesia as the country with the largest Muslim population,” wrote Jeff Diamant of Pew.

Despite those similarities, Muslims also may have cultural differences. MuslimMatch makes it easier for those singles to connect on levels beyond their binding faith.

Matrimony.com, which includes a collection of matchmaking platforms, was founded two decades ago to cater to singles in specific religions, communities, nationalities, and professions.

The company now operates nearly 400 matchmaking brands around the world.

MuslimMatch introduced 20 regional apps focused on particular countries and regions. Some of those platforms include TurkishMuslimMatch, AmericanMuslimMatch, and EuropeanMuslimMatch. The platform is also available in nine languages.

Members can search for singles who live near them or can browse for singles living in a wider geographic area. This strategy of clustering apps has made MuslimMatch the fastest-growing dating site in the world for Muslims.

A Safe and Trustworthy Platform

MuslimMatch attracts young singles between 22 and 32, primarily from the US, the UK, Europe, the United Arab Emirates, and Asia. The platform attracts a balanced ratio of upwardly-mobile men and women.

It is also committed to taking care of women members. The platform introduced selfie-verified profiles, matching profile photos to selfies to reassure users they are communicating with a real single. MuslimMatch also manually verifies each profile to weed out non-serious users.

Users who choose to register for free can access several features after creating a profile. They can set their partner preferences based on age, location, education, community, and religious practice, among many others.

They can view the basic details of profiles of interesting matches, , and send and receive likes. They also receive daily match alerts on their mobile device.

Singles who want more tools can upgrade to a paid membership to view unlimited matches every day. They can also see who viewed or liked their profile and instantly chat without waiting for a mutual like. Premium search filters also return the most relevant matches.

Some young Muslims have expressed the difficulties of finding compatible partners — even among people who share their faith. MuslimMatch helps those singles eliminate the guesswork and meet people aligned with their personal beliefs and goals.

Faima, 25, from the UK, wrote that Muslim men who have respectable jobs — in banking, finance, medicine, or law — may exhibit toxic masculinity traits that hold them back from making emotional connections. She also noted the lack of available Muslim men who work in more creative industries beyond the male-dominated career paths.

Aaliyah, 27, from Canada, agreed: “Unfortunately, many women have internalized the idea that they absolutely have to cater to a man’s physical, intellectual, spiritual, and sexual needs at their own expense. In some cultures, women are also socialized to desire marriage beyond anything else from a very young age so when they are proposed to, it feels like an accomplishment.”

Women who struggle to meet men can find a larger group of compatible singles on MuslimMatch than they would otherwise meet at social gatherings or in school. It also allows them to be more selective about the men they date and marry.

MuslimMatch has become one of the most widely-used dating sites for young Muslims who want to meet partners who share their religious beliefs.

The site has increased in popularity during the COVID-19 pandemic when more users started using online platforms to find love and marriage. In 2021 alone, the MuslimMatch app had more than 1 million downloads.

The MuslimMatch team plans to continue focusing on the product and customer experience in 2022. Arjun said he and his colleagues plan to add more in-depth profile options so members can get to know potential matches better before they connect.

The team is also working on enhancements to provide better communication between members.

“If you ask us about our mission, it is to establish MuslimMatch as a trusted, credible matchmaking app for single Muslims worldwide,” said Arjun.