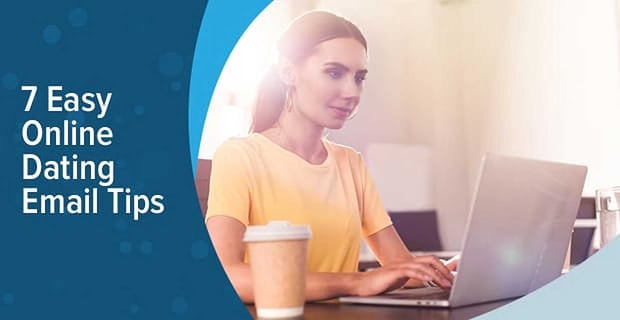 The good news is you don’t have to worry too much because we’ve got some advice that’ll take the stress out of the situation and make sending online dating emails fun and successful like it should be.

Whether online, on the phone, or in person, people can smell fakeness a mile away, so don’t try to put on a show or be something you’re not. Don’t say things you don’t mean just because you think it’s what the person wants to hear and it’ll get them to respond to your message. There’s no need for pick-up lines — honestly tell the person what it is about them that caught your eye and that you’d like to get to know them.

Online dating has been around since the ’90s, so I think by now we all know that just a “Hi” won’t get you anywhere. And for good reason. It’s lazy, it shows lack of creativity, and it makes it seem like you don’t care. Saying their name and asking a question only takes a second, and it can make a big difference.

If you don’t ask a question in your emails, why would someone want to respond?

You could say something as simple as: “Hey Amy, love your profile and photos! I saw that your favorite food is avocado — I’m obsessed, too. Have you tried any of those avocado desserts yet? I’ve been too scared to branch out, but how bad could avocado ice cream be? I mean, it’s ice cream after all.”

You know when you see someone’s profile or messages and they’re filled with grammar errors and spelling mistakes? Whether it’s true or not, you tend to think they’re lazy, not very smart, or a spammer. Don’t ruin your chances with a potential date right from the get-go by not rereading your work. When you’re done with your profile and messages, all you have to do is put your sentences into a Word doc and look for the red squiggles, or you can ask a friend who you trust to look over the content for you.

Studies show people who send GIFs in their online dating messages increase their response rate by 30%. It’s so easy you’d be crazy not to try it. Some good examples include Jimmy Fallon in a barn saying “Haaaaaay,” the polar bear jumping out of the pool and screaming “OMG hi!” and Kelly Kapowski waving.

Sending a GIF is a simple way to break the ice and make someone laugh.

Another funny option is to send a joke. Some of our favorites are “Do you like Harry Potter? Because I adumbledore you” and “Biggest fear… spinach, snakes, or saying ‘you too’ when the waiter tells you to enjoy your meal?” You could also never go wrong with a dad joke: “Want to hear a joke about a piece of paper? Never mind… it’s tearable.” Or you could send the joke without finishing it to prompt them to say the punchline.

5. Mention Something Specific to Them

The example we used earlier about avocados demonstrates well what we mean by mentioning something specific to them. If you don’t bring up something you saw in the person’s profile or photos, they may think that you’re just copying and pasting because that message could be about anyone in the world.

6. Send Messages at the Right Time

Zoosk conducted a study about when online daters should send their messages and found peak times are between 10 and 11 p.m. In addition, the folks at Virtual Dating Assistants recommend avoiding doing so during work hours and say that messages sent on Mondays, Tuesdays, and Thursdays receive a 50% lower response rate.

Sending messages at 3 a.m. tends to be a bad sign.

Think about what the time and day you’re sending messages says to other people. For example, if you’re up at 2:30 a.m. on a Monday sending messages, people may wonder what you’re doing awake at that time. Plus, you’ll probably have to wait forever to get a response. Friday nights aren’t that great either because it can look like you have nothing better to do.

If you’re going to send messages at these times and on these days, at least check to see if the person’s profile says “Online now.”

7. Make Them Want to Reply

The main point is to make the person excited to reply to your message. You want them to know that you spent time looking at their profile and photos, thought about the best thing to say, put in some real effort, have a fun personality, and are worth their time. Remember what all of our moms probably taught us: Treat others how you want to be treated.

The 1st Thing You Should Say When Online Dating

How to Go From Messaging to Meeting

Why She Won’t Respond to Your Email

How to Use Your Profile to Get Him to Contact You