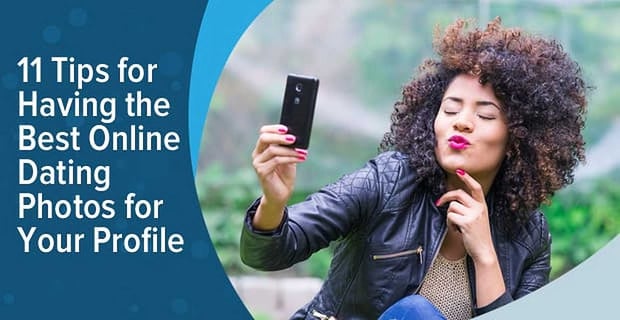 According to research conducted by Princeton University, it only takes one-tenth of a second for a person to form an impression after looking at someone’s face. The article, called “First Impressions” and published in Psychological Science, also shows that first impression doesn’t significantly change the longer the person looks at the face.

This fact becomes particularly scary when we’re talking about online dating. Your photos make up so much of your profile, and you only have one chance to inspire someone to swipe right or reach out to you. Don’t freak out, though. We’ve reviewed several other studies and put together a list of tips for choosing the best online dating photos to put on your profile.

We’re just going to put this out there: If you upload only one photo, that’s just laziness. If all it takes is one-tenth of a second for someone to decide what they think of you, posting one photo is basically telling them you don’t really care about online dating and don’t have anything interesting to share about yourself. In terms of actual numbers, eHarmony likes at least four photos, and Match likes staying below 12, which seems like overkill to us as well.

We all know variety is commonly known as the spice of life, and the same goes for your online dating photos. We recommend you post a handful of photos or so, and select photos of you in different poses and engaged in different activities.

A slew of portraits of you doing the exact same thing isn’t going to do you much good.

We’d suggest having a combination of face, full-body, action, dressed up, dressed down, serious, and goofy shots. The point is to give potential matches a peek into your personality, background, and interests.

3. Portray How You Really Look

One of the biggest oh-no-nos of online dating is lying about or exaggerating your appearance and characteristics. Photos that are more than five years old shouldn’t be anywhere near your profile — unless you have magical powers like Reese Witherspoon or Jared Leto and never age. We imagine you’d be pretty pissed if your date showed up looking completely different than how he or she portrayed themselves online, so don’t do that to someone else.

4. Make Eye Contact With the Camera (the Right Way)

The team at OkCupid examined the difference in the number of monthly contacts a person received based on whether he or she made eye contact in photos, and what they found is very interesting.

For the ladies, OkCupid says the best thing you could do is make a flirty face while looking into the camera.

For men, it’s looking away from the camera and smiling (because it creates an air of mystery).

On the flip side, the worst thing both men and women could do is make a flirty face while looking away from the camera. Trust the science, people!

The color you wear in your main profile photo can have a huge impact on how many people message you, according to Psychology Today. For 12 weeks, researchers from the Université de Bretagne-Sud followed the online dating experiences of more than two dozen women aged 20 to 30.

To help out the fellas, we turned to Look Better Online, an online network of professional photographers that’s improved the profile pictures of thousands of singles. In their experience, the experts recommend wearing dark blue or black (particularly a dress shirt) and avoid loud patterns (sorry, Hawaiian shirt).

If you were putting your résumé that included a photo online, like on LinkedIn, it probably wouldn’t be blurry, right? Or far away? Or cropped weird? You should take that same consideration with your dating profile.

As we’ve said, uploading photos like this will make it seem as if you don’t care, which we’re sure is not the case. People are going to pass on you for their own reasons, but don’t give them any extra ammo. You want every single photo to be sharp, tight, and clean.

Also, we’re not the biggest fans of racy photos on dating profiles, but the facts prove most male online daters are (go figure). The same OkCupid study mentioned above found women with photos showing cleavage will get more responses, but are they the kind of responses they want? Strike that balance between sexy and restrained, ladies.

On the other hand, the facts prove most female online daters dislike racy photos. Another study of Match’s reports that one-third of women describe shirtless selfies as “downright offensive” and “an almost instant dealbreaker.” Plus, more than one-fifth hate mirror selfies taken with a smartphone. It’s harsh, but it’s the truth.

8. Only Use a Group Pic People Can Easily Spot You In

Normally, we tell readers to stay away from group pics because they make it harder for people to determine which one is you (it would suck to have someone become attracted to your friend).

If all of your other photos are just of you, then definitely feel free to upload one of you and your friends or family. Maybe just upload it later in a series of photos after several others.

In addition, make sure it’s a genuine group photo and not one that looks staged or is staged. The team at Virtual Dating Assistants explain that posed group shots will decrease the number of messages you receive by 42%.

9. Show Off You With Your Pets (If You Have Any)

If you don’t have a pet or are not an animal person, it doesn’t mean your profile is bad because you don’t have a picture with a cute dog or cat. You can’t be someone you’re not, so don’t worry about it. Incorporating even a couple of these tips should still bring you more success.

Now, if you do have a pet or are an animal person, you want to get that across in your profile because it’s just another thing that can help. Not only did OkCupid find that photos with animals are more likely to attract people, but they’re also more likely to make women feel comfortable meeting a man in person, as reported by Lifehacker.

10. Use a Professional Photographer

We’re big proponents of hiring a professional photographer for those who are serious about online dating and finding love (and who have the financial means). An article on NBCNews.com says this is one of the best ways to take your profile to the next level.

“In many ways, it’s kind of like an audition,” Rhe De Ville, a professional photographer based in New York City, told the site. “You can have a stellar profile, but if that photo isn’t connecting with people, it can kill a chance to meet an interesting person.”

Look Better Online can help find the right photographer for you.

Our only concern with using a professional photographer, or if you’re one yourself, is the photos might appear stiff and too well-done, taking away from the realness and authenticity that you want to exude. Give your potential photographer a mini interview to see how they use and/or feel about Photoshop, and check out their previous work. If you’ll be doing any editing on your own, try to keep it to a minimum.

Photos Are the Windows to Your Online Dating Profile!

An online dating profile is something that’s always evolving and can always be improved, and your photos play a vital role in that. If you’ve put them on the backburner, it’s OK. That’s what these tips are for. Make use of even one or two of them, and that one-tenth of a second will be more than enough time for a potential match to learn that you’re absolutely worth reaching out to.

Will Cyber Jealousy Ruin Your Relationship?