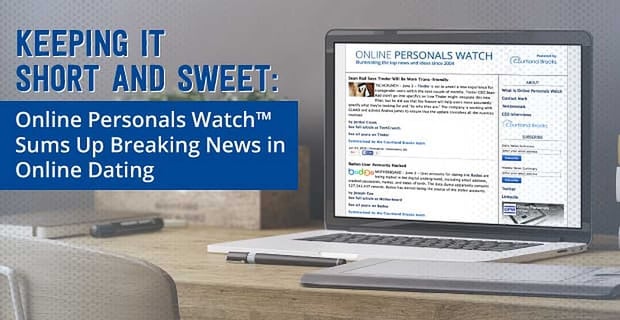 The Short Version: The dating industry moves so fast these days, it can be hard to keep up. Online Personals Watch makes it easier by bringing concise and quick headlines to busy Internet dating professionals. Since 2004, Online Personals Watch has served as a go-to news resource for people making an impact in the dating industry. An expert on the business side of online dating, Mark Brooks and his wife, Irena, summarize important news stories and interview CEOs and luminaries to provide a complete daily reference on the business of love.

In 2005, Mark Brooks stood on the balcony of a friend’s penthouse in Prague, enjoying the September night air. Single and social, he was making the most of his trip abroad. He’d just attended a conference on Internet dating in Europe, and this was his going away party before he flew back to the U.S. He’d been working in the dating business since 1998, but he’d never been head-over-heels in love himself.

Then a young woman walked out into the chilly night and asked in Czech, “Does anyone here speak Czech?”

Mark had no idea what she’d just said. What flashed through his mind was, “I’m not going to let this girl say another word in Czech.”

He was surrounded by Czech guys, but none were as assertive as he was. He sidled up to the girl to introduce himself, in English. She smiled, and the connection was instant. Luckily, Irena spoke English, and they laughed together well into the night.

Mark and his wife met in Prague and now live in Malta with their three daughters.

About a year later, one shivery cold morning on the Charles Bridge in Prague, Mark dressed up like a beggar and proposed. She said “yes.” Today they have three daughters and run a successful business together.

This husband-and-wife team head up a comprehensive dating industry news source, summarizing the daily headlines to save readers time. Online Personals Watch (OPW) was begun by Mark in 2004, but now he says that his wife takes the lead on it.

“She’s really pragmatic and very intelligent,” he said. “She zeroes in on the intelligence in the news that dating innovators and executives need to know.”

Mark has over 15 years experience working for dating websites and apps.  While Irena runs OPW, Mark runs a boutique consultancy for Internet dating companies. His clients over the years have included PlentyofFish, Meetme, Dating Factory, and Global Personals. He’s also keynoted at the industry’s leading Internet Dating Conference every year since 2005.

In All His Business Ventures, Mark Seizes Opportunity

Although his background was actually in manufacturing engineering, Mark soon got into the online dating industry when he moved to Silicon Valley in the mid-1990s. He founded an Adventure Club through which he met many up-and-comers, including Jonathan Abrams, Founder of Friendster.

As the club grew, reaching over 3,600 members, Mark got interested in bringing that kind of event-oriented experience online to help people meet. In 1999, Mark helped develop Hypermatch, a dating site that was later sold to EZBoard.

“I was addicted,” he said. “I’d run my club for some years, and people were starting to get married from meeting at my club. That seemed like a bigger cause, something that was fun and more of a social impact. So it just lit the fire.”

He started experimenting with hosting events for dating and social networking sites. He also worked on press relations, business development, and affiliate management while he was at it. It was a thrilling time of growth and exploration. As Vice President for Cupid.com, he assisted with a buyout of a speed-dating company and oversaw the site’s expansion to 70 U.S. cities.

In January 2005, he found himself simultaneously presented with three job opportunities from Cupid.com, Diet.com, and Webdate.com. Ambitiously, he decided to do all three. He then started Courtland Brooks, a consulting firm that handles strategy, business development, and media relations in the online dating niche. After moving from frigid New York to sunny Florida, he began growing the consulting business, contracting with specialized and seasoned professionals.

To Save Time, Online Personals Watch Began Dissecting the News

While working for CEO/Founder Andrew Conru at FriendFinder in 2003, Mark stumbled upon a frustrating issue. Friends kept sending him news that intrigued him — stories about the dating industry that seemed important. The articles piled up in his inbox.

“I thought, ‘I’ve got to condition myself to read this stuff because this is not just news — this is intelligence,’” he said. “It’s really important for me to consume and share this.”

He started looking for good summaries of news stories, but he couldn’t find a reliable resource. He decided either he was going to find someone to summarize the news for him, or he’d have to do it himself.

“I couldn’t find anything, so I thought, ‘That’s it. I’m going to start a site and condition myself to read and share the intelligence from this industry news each day,’” he said.

In June 2004, Online Personals Watch posted its first article, and Mark started forwarding his news summaries to professionals he knew in the industry. It began to develop a following through email and social media, which has grown to reach most of the top innovators and executives in the dating industry

Because people have a limited attention span, and so much else on their mind, OPW keeps it short. The site highlights the top-tier news — from The New York Times, The Economist, and other noteworthy sources — but also digs deeper to find hard-hitting stories and momentous shifts in the industry.

There’s a certain threshold of importance that Mark sets his sights on when looking for topics to cover. “We have an audience of one,” he explained. “We write and summarize for the CEO of Match. We ask ourselves: Will this be of strategic significance for the leaders in the industry? Will it help them make better decisions to know this?”

Posting one to three articles a day, the site doesn’t overload you with information, but instead offers brief highlights. It doesn’t take long to skim through the posts and come away with an understanding of the current state of the industry.

“Our entire focus,” Mark told us, “is on the people who are making decisions that will define how dating services will evolve and how they will serve the users.”

This unique free news-gathering service keeps the dating industry entirely up to speed. Online Personals Watch condenses the endless feed of breaking stories on the online dating industry into pithy articles that cut to the core of an issue’s statistics, consequences, and general impact.

“We’re not trying to make something entertaining,” Mark said. “We’re trying to look for the intelligence in each article: The numbers, the intel, the things that would help people think differently and make decisions and make their product better and make their businesses better.”

Keeping His Finger on the Pulse of the Industry, Mark Interviews Top Dating Site Executives

“We want to know where they come from and predict where they’re going,” he said. “We give insight to users and executives about where the industry could go as a consequence of their thinking.”

Currently, the team is interested in delving further into and gaining a better understanding of foreign markets. Reaching out to the far corners of the world, Mark has interviewed people like Dr. Song Li of Zhenai, a popular dating site in China. Match just bought 20% of this company, so it’s well worth noting.

Mark brings a strategic mindset and business expertise to the online dating industry. He interviews CEOs to find out what these leaders are thinking and what users can expect from dating products in the future.

Following the Trends and Reporting the Impact on Online Dating

Dating is becoming an increasingly mobile experience for most users. In January of 2014, Plenty of Fish CEO Markus Frind estimated that 85% of POF traffic was on mobile devices — and growing 1% a week.

In his interviews and articles, Mark tracks the landslide shift of people switching to mobile dating. His interest is in seeing how the infrastructure and the technology can better accommodate this burgeoning market.

“It’s a really fascinating little game,” he says about the shuffling and adapting strategies of companies, big and small.

Mark stays in the thick of the action in the dating industry to report the impact current events can have.

Mark has a deep respect for those innovators who shape the direction of the industry. He diligently covers every major shift on Online Personals Watch.

Currently he’s getting his master’s degree in behavioral science at the London School of Economics.  He’s excited to help guide the industry to achieve its true potential.

Above all, he hopes better information-gathering systems will mean a better product, over time.

“If you observe people, they’ll tell you who they are. If you look at the way they behave, you’ll get to know them,” he said. For the dating industry, he believes this is key. “The core of how we achieve our promise is to find better ways of observing people’s behavior to understand their character and their choices to understand their preferences.”

When Mark dove head first into the dating business, he was a single guy curious about how organized events could build relationships. Now he’s a happily married man — still inspired and intrigued by how people connect online.

With his wife by his side, he puts his decades of experience to good use by translating the news of the day into a single paragraph. In its articles and interviews, Online Personals Watch offers valuable insight into the dating industry.

“We’re most interested in serving the strategic thinkers who are defining the future of the dating business to better serve humanity,” Mark told us. “It’s a bit of a mouthful, but it’s exactly what we do.”