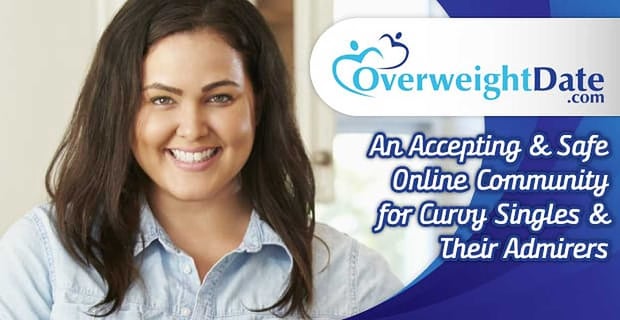 The Short Version: General dating websites can be unwelcoming places for curvy daters seeking companionship. Small-minded singles and superficial judgments often reign supreme on many of today’s most popular platforms. However, on OverweightDate.com, size doesn’t matter, and no one needs to feel ashamed about his or her natural shape. Large lovers and their admirers belong on this niche dating site, which has over 100,000 members. With a straightforward interface and compassionate policies, OverweightDate.com helps singles find new friends, dates, and relationships online. A passionate team looks after members by actively policing the site to maintain its safe and friendly atmosphere. Anyone over the age of 18 can sign up for a free basic membership and enjoy a worldwide community that values singles with more to love.

One of my closest friends hates online dating, and I can’t say I blame her. When she set up her profile a few years ago, she had a bad experience with some grade-A creeps. The lowest of the low was the guy who sent her a message reading “Ever thought about losing 15 pounds or so? You’d be so hot.”

My friend is self-conscious about her weight, so this comment from an insensitive stranger devastated her. It was like everything she feared guys thought about her suddenly became real. I told her she should send a scathing reply (like “Ever thought about deleting your account? You’d still be a dick, but it wouldn’t bother me anymore.”) and move on, but she couldn’t bear to return to the dating site and risk more ridicule.

The nastiness of a few bad apples can ruin online dating for sensitive souls like my friend. Some dating platforms encourage superficial judgments that lead to heavy singles feeling ashamed of their bodies or trying to hide what they look like — and that’s simply unacceptable.

OverweightDate.com has created an online community around the idea that big is beautiful.

Founder Ian Klein is proud of the dating site’s mission to assist and support big beautiful singles of all orientations. He said his dedicated team works hard to create romantic opportunities for people around the world.

“Our partnership with the Venntro Media Group has allowed us to elevate the quality of technology and the size of our community,” he said. “Their sophisticated software platform has allowed us to scale from a national community to truly having a global presence.”

It takes less than a minute to sign up and start browsing OverweightDate.com. The dating network relies on award-winning software to quickly connect members in a user-friendly experience. Free members can search for dates and send unlimited winks on the site.

Once you’ve completely filled out your profile, you’ll unlock the ability to send a free introductory message to anyone you like. You’re limited to one message per person, so, if you want to keep the conversation going, you’ll need to upgrade your membership. OverweightDate’s full membership package includes access to instant messenger tools, private messages, and dating diaries. You can also see who’s viewed your profile.

Large lovers and their admirers can connect on the site and gain confidence in the dating space. It’s a friendly platform where singles find a sense of belonging. Plus, the site is mobile-friendly so daters can access the network from any device.

“It’s not necessarily about soul mates,” Ian said. “More than anything else, it’s about relationship-building. On OverweightDate.com, you can find companionship with people who relate to you.”

The dating site has over 100,000 members of all creeds, orientations, and sizes. You don’t have to be a plus-size single to become an OverweightDate member. Any adult whose love is more than skip-deep can join the site and search for romantic prospects online.

“There are absolutely no rules or discrimination of any kind on who can be a member on OverweightDate.com,” Ian told us. “The only policy, if you will, is that in your heart you have to be attracted to people for who they are.”

Ian is sensitive to the fact that overweight daters often become targets of bullying and harassment. “These are people who would otherwise have a difficult time making friends or getting dates,” Ian said. To make the going smoother and safer, OverweightDate.com provides a judgment-free zone for singles and monitors behavior to keep out those who would prey on vulnerable members.

“We’ve raised the bar on how to address issues,” Ian said, “to make sure our members continue to feel safe on the site.”

The strict policing measures set the dating site apart from other dating platforms. With a no-tolerance safety policy, the team won’t hesitate to block someone behaving inappropriately because they put the security, well-being, and happiness of OverweightDate members first.

“Our members often have faced more challenges finding love than the general population has,” Ian acknowledged, “so it’s an incredibly rewarding feeling to know we’re able to bring relationships to people’s lives.”

Since the beginning, OverweightDate.com has engendered loyalty in a niche community of singles. One member named Trish Blain felt so strongly about the site’s mission that she agreed to give a news interview to recommend its good qualities. “It’s easy to disqualify people based on one or two traits that don’t fit your perfect vision for who you’d like to be dating,” Trish explained, “and I think sites like this really help to eliminate one of those barriers.”

OverweightDate.com began as a way to connect offline people online, and now the team is developing ways to connect online people offline. Ian told us he wants to start organizing members-only singles events in Boston (where the site’s headquarters are) to balance offline and online dating. Over time, the hope is to expand city by city and run events across the nation.

These meetups offer a fun and casual way to meet people through OverweightDate.com’s network. Instead of setting up an interview-like date, singles can go and hang out in a group of congenial men and women. Ian recognizes the need for a more personalized engagement on dating websites so he hopes these singles events inspire people to get away from their keyboards for at least an afternoon.

On OverweightDate, Love Comes in All Shapes & Sizes

OverweightDate has been around a long time — it predates Facebook and Twitter — and has stood the test of time because of its compassionate, open, and hopeful stance in the dating industry. On this site, singles can escape the judgment of close-minded individuals (like the douche who messaged my friend) and mingle with people who accept and admire each other’s differences.

Whatever your weight, background, or sexual preference, OverweightDate.com provides a welcoming place to make friends, attract dates, and find someone who loves you as you are. The site began as a passion project and has become a dating movement focused on supporting big-hearted daters everywhere.

“This is probably the most rewarding work I’ve been involved in,” Ian said. “The impact it has on people’s lives is immeasurable.”