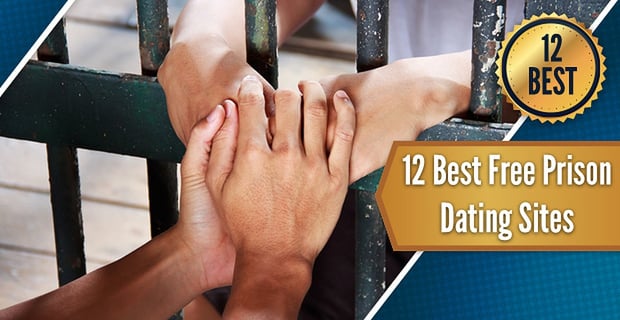 According to recent statistics, more than 2.3 million Americans are incarcerated in some type of correctional facility, including a local jail, state prison, or federal prison. But that doesn’t mean their dating lives are put on hold. In fact, we’ve found 12 prison dating sites created just for inmates, ex-cons, and those who want to connect with them

Now, these dating sites don’t condone breaking the law, nor do they offer exoneration for criminals. However, they can provide a safe space for people who have paid or are paying their debt to society, and allow prisoners to start over and meet people who won’t judge them for their past. It’s free to create a profile or write a letter on the following dating sites and see what’s out there waiting for you.

Match doesn’t cater specifically to single inmates and their admirers, but it has more users than most other dating sites, and it’s the most successful (having been responsible for the most dates, relationships, and marriages). Match also offers a 100% free memberships that includes signup, matching, communication, and live events, among other features. All you have to do is provide a valid email, first name, age, location, gender, sexual orientation, and a few other details, and then you’re part of a community of 40 million singles in 25 countries.

Meet An Inmate has been “connecting inmates with pen pals since 1998.” While inmates pay a small fee to be listed on the site, it’s 100% free for people to write to them. Letters are sent via the US Postal Service. According to Meet An Inmate, “We are very customer oriented. We have been the trusted prison pen pal site to list inmates for many years. Our success lies with our word-of-mouth advertising between inmates who have had success using our service.”

Love A Prisoner is an inmate dating site with a 75% compatibility rating. Users can browse by gender, ethnicity, location, prison, and type of member (regular or VIP), and they can write to each other and buy each other gifts if they feel like splurging. Not only that, but Love A Prisoner provides information about prison laws and facts as well as places to report problems like on-site fraud.

Write A Prisoner focuses on inmate correspondence and reintegration — members can find pen pals, counselors, educational materials, employment, housing, legal information, scholarships, and even artwork like poems. In addition, the site, which was launched in 2000, has a blog and forum where members can ask and answer questions and share what’s on their mind.

Inmate Classified has been around since 1996 and caters to “inmates seeking friendship outside prison walls.” Once you register, you can gain even more attention by being highlighted in the Featured Profiles section of the homepage. As the site says, “There is no greater gift you can give to a stranger than a few words of encouragement when he or she needs it most.”

“Making connections from the inside out,” Inmate Mingle facilitates new friendships, casual dates, and serious relationships. Whether you’re on the desktop or mobile version of Inmate Mingle, you don’t have to pay anything to become a member, browse profiles, and correspond in certain ways. An easy way to start a conversation is by looking at the birthday section of Inmate Mingle’s homepage. If someone catches your eye, say hello to them on their special day.

On Dating Prisoners, it’s free to create a profile, edit that profile anytime, add several photos, and see who’s online at the same time as you. The free membership also allows you to browse members by your preferences, receive matches, and flirt. In addition, Dating Prisoners, which has offices in the US and Greece, is mobile-friendly, so you can meet inmates no matter where you are or what you’re doing.

The self-proclaimed “world’s most trusted prison pen pal service in the USA,” Prison Inmates welcomes people of all genders, sexual orientations, religions, ethnicities, and cultures. The main qualifier is you have to be 18 or older to join. More than 3,000 inmates make up Prison Inmates’ user base, and search filters include State, Lifers, and Death Row. In addition to funding an inmate’s account, other extras available for purchase include gift cards and message service renewal.

Friends Beyond The Wall

Created in 1999, Friends Beyond The Wall understands that “prison is a lonely world without a friend,” so the site publishes new inmate ads every week. In total, the site has published more than 2,500 ads from people in 46 states. Inmate addresses are given to members for free, and you can send your first letter via email to break the ice a little more easily. It’s also worth mentioning that Friends Beyond The Wall is owned and operated by family members, friends, and acquaintances of incarcerated people.

As you probably guessed by the name, Women Behind Bars is specifically for incarcerated women and those who want to meet them. A free membership allows you to upload information and photos, and view inmate listings, among other things. Founded in 1997, Women Behind Bars says that “you can make a difference and “become a ray of hope in someone’s life” by writing a letter, so give it a try today.

Inmate Passions isn’t just a dating site — it’s also a social network where inmates, or former inmates, and their admirers can come together via forums, groups, live chat, webcams, photos, private emails, and other forms of communication. And when Inmate Passions says it’s 100% free, it absolutely means it. You’ll never have to provide payment information. While a Network Membership provides a banner-ad-free experience, it’s not necessary at all in terms of finding your ideal match.

Canadian Inmates Connect is dedicated to helping single inmates in the Great White North regain their dignity, self-worth, and independence by matching them with people who are empathetic to their situations. The site’s team had this to say about connecting with an inmate: “Consider taking a few minutes to write a letter or send a card. It’s something simple like this that could lift their spirits and brighten their day.” You must be 18 or older to correspond on this site.

Being Single Doesn’t Have to Be a Life Sentence

Most inmates want companionship just like everyone else, and the mission of the 12 prison dating sites above is to help them build those human connections and reintegrate with society. Inmates can find a caring pen pal, a fun date, or even a life-long relationship on these welcoming sites. It’s a freeing experience that could lead to something truly remarkable.

Just remember that you’re still meeting strangers online, so take precautions and make sure you’re not putting yourself in too vulnerable a position as you put yourself out there. Safety first!