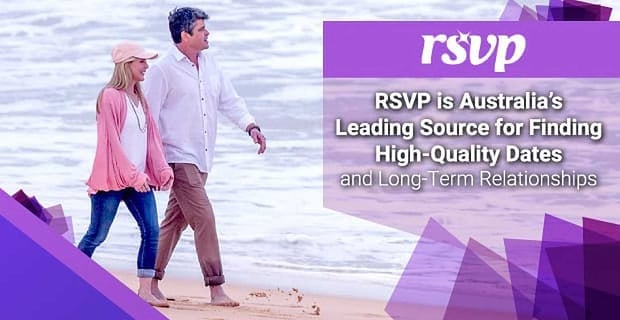 The Short Version: Not many dating sites can claim a two-decade history of serving singles, but RSVP.com.au can. The site is proud to be Australia’s leading — and oldest — platform helping the country’s singles find both dates and long-term partners. On any given day, tens of thousands of members log in and use the site’s proprietary matching technology to connect and chat with possible partners. RSVP makes it easy for people to join and meet others, and the site even provides safety tips to ensure its users have the best possible experience.

More than two decades ago, the internet was just starting to hit its stride and was becoming a common feature in homes, offices, and schools. Back then, I was obsessed with email and meeting other teens from around the world who shared my love of reading and writing. My mom was into finding recipes and reconnecting with old friends and classmates using new technology.

But many others were using the World Wide Web to find love in forums, chat rooms, and on websites dedicated to finding a partner.

One such platform, RSVP, was launched in Australia on Valentine’s Day in 1997. It was built to help Aussies virtually meet in hopes of finding someone special to connect with in the real world. Since then, the site has grown into a community of millions of members and countless success stories.

“Many people may see online as being a relatively new way to meet people, but it’s something that we have been specializing in for two decades,” said Jen Romero, Marketing Executive at RSVP. “During this time, RSVP has shifted and changed with the needs of Australians.”

The site’s success is a testament to its ease of use, high-quality matches, and a dedicated local team working behind the scenes.

Australia has a population of 24 million people, which makes it all the more impressive that RSVP has had 4.42 million members. That means that about 1 out of every 6 people in Australia has used the dating platform.

In addition, 1 out of every 3 Aussie couples who have met online, have done so through RSVP. Although its target audience is Australians who are looking for other Australians, the site does have some members from other parts of the world. The site has enabled non-Aussies to meet someone local and expats working down under to find each other.

RSVP — which is also available as an app on iOS and Android — found that one-third of its Australian users found a long-term relationship through the site — and 1 out of 5 users got married or found a life partner.

RSVP has been connecting Australian singles since Valentine’s Day 1997.

Among the more than 650 success stories published on the site is a couple who reached their 10th wedding anniversary after meeting on RSVP. Some had used a variety of dating sites but always came back to RSVP because of its quality of potential partners. Another showed her appreciation for the site’s filters, which allowed her to find a great match.

The site also includes a blog, DateHub, which has sections on planning dates, travel tips, trends, and general advice.

Breaking Down Barriers That Turn People Away From Online Dating

RSVP users are often looking for a long-term relationship, and tend to be more mature. Members are typically between 35 and 50 years old and equally split between men and women. The site also welcomes users from their 20s up through their Golden Years. Members come from a variety of cultural and religious backgrounds, and the site allows users to search for people who have similar beliefs.

While many people are tech-savvy today, there are still those who feel like creating a profile and connecting with someone isn’t an intuitive process.

RSVP’s mission is to remove the barriers to finding a match online, which is why its sign-up process is easy and intuitive. Once users create an account, they can browse profiles of fellow members who meet their criteria. “RSVP is constantly developing technology to ensure people find what they’re after,” said Jen. “We also have powerful algorithms that help connect people with similar interests.”

Each member can send unlimited free kisses — which is RSVP’s method for showing interest in a person to see if the feeling is mutual. When you get a favorable response from someone, you can purchase stamps, which allow ongoing communication through the site. These stamps are not of the postal variety but are instead tokens that give users access to a month of correspondence with another member.

RSVP’s sign-up and search processes are easy for users to understand.

Members receive daily matches based on the criteria they set for their ideal partner. The Discover tool prompts users to consider matches that they may not otherwise think to look at.

“Discover draws data from previous successful member contacts and conversations on RSVP and matches people with similar attributes to these past successes,” said Jen. “This tool gives people a chance to find matches they might have missed or overlooked if they relied solely on their wish list.”

RSVP offers several pages of dating safety tips and advice to prevent users from having a bad experience with online dating. There’s an entire page detailing how its employees manually verify users to avoid fraudulent profiles. And once you’re ready to take your relationship into the real world, RSVP provides advice and information to help keep you safe.

The RSVP team understands the critical role it plays in the lives of members, and everyone takes the responsibility seriously. The team is led by David Heysen and Daniel Haigh, who previously founded Oasis.com — another highly successful dating platform — and have decades of experience in the industry.

Jen Romero, Marketing Executive at RSVP, is proud of the site’s history of connecting people.

“We take pride in the fact that the majority of the work on the site is all done in-house,” Jen said. Since its customer service is based in Australia, members who need support can get it in real time, with someone in their time zone. Changes and updates are completed quickly and efficiently because the engineers are also local. “It’s very much like a family in this way. Everyone continually gets together to make sure things are running smoothly and are really in the best position possible,” said Jen.

As for its future, the site will continue to communicate with members to understand their needs and serve them better. “We are 100% ingrained into the Australian online dating landscape to provide members with best possible dating service around,” said Jen. “We’ve played a massive role in the lives of many, and are extremely proud of our heritage and progression.”

While RSVP isn’t ready to announce plans for future products or services, it encourages members to watch the site so they’ll be among the first to know about exciting changes on the horizon.