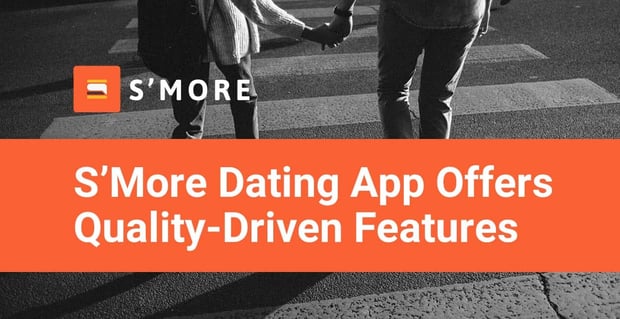 The Short Version: S’More is a new dating app that aims to bring sweet relief to singles who are burned out on mainstream swiping apps. Since its launch in the App Store in 2020, S’More has melted hearts by offering profiles with colorful icons, voice messages, and blurred photos. The S’More app gives its users more freedom to express themselves and put superficial judgments aside as they build authentic relationships.

Adam Cohen Aslatei has been in the business of helping people find love since he was a 23-year-old graduate student at Harvard. He received a $25,000 grant to create opportunities for single graduate students to build relationships across different colleges.

His solution was Harvard SpeedDating, which launched in 2008 to power speed dating events on campus. Attendees could go online to report which dates they liked, and mutual matches would receive each other’s contact details. This matchmaking system predated mainstream dating apps and was Adam’s first step into a burgeoning industry.

As a dating industry consultant, Adam has worked behind the scenes to develop and market many popular social networking apps, including Tagged, Skout, and other properties run by The Meet Group.

Bumble’s CEO tapped Adam to help build the brand for the gay dating app Chappy (part of Magic Labs). He helped scale the brand in the U.S., doubling usage in a matter of months. The Group was recently acquired by Blackstone (Badoo, Bumble, Chappy, Lumen).

Soon after departing the company, Adam had to figure out what his next project would be — and he decided to try to fix online dating with an app called S’More.

Adam told us the inspiration for S’More came on a beach in Cabo. He met a curvaceous black millennial woman who claimed swiping on dating apps had ruined her love life. Her stories of catfishing, ghosting, and body shaming gave Adam insight into the pain points caused by modern dating apps. He saw an opportunity to create more meaningful connections by eliminating the superficial aspects of mainstream dating apps (or least delaying it for some time).

“S’More comes from the term ‘something more,’” Adam explained. “That’s the #1 term people use when they give feedback on dating apps. They want something more.”

S’More launched in the App Store in January 2020 on a mission to support a more dynamic, intentional, and quality-driven online dating experience.

Once he got the idea for S’More and built a prototype, Adam returned to Harvard to beta test the app with law students. The first S’More users were about 100 law students, and it grew rapidly from word of mouth.

The app is currently live in Boston, Washington, D.C., Chicago, New York City, and Los Angeles, and the team plans to expand to more cities soon. Adam told us that about 40% of users come from cities where the app has not officially launched, but they use S’More Explore to match with single people outside their city limits — until S’More arrives in full force to that area.

S’More is currently available for iPhone users only. Android and desktop versions of the app are scheduled to be released in 2021.

The S’More profile stands out from the crowd because the focus isn’t on photos (initially), which are automatically blurred. S’More users enjoy a more dynamic profile setup displaying colorful icons, animations, voice recordings, and music. Each profile has a unique look and sound that represents who a person is beyond the surface level.

S’More users can customize their profiles to showcase their personality.

Once two people establish a mutual match, they will slowly but surely unlock new parts of the other person’s dating profile. As they get to know each other, they’ll be able to view photos and access video galleries. Matched users can even arrange a video call through the dating app. S’More blurs all video calls for the first several minutes, so users can remain anonymous if they wish.

The S’More team has taken steps to foster a safe and creep-free environment for singles. Its profile verification tools can stop catfishers in their tracks and automatically delete photos that use filters, airbrushing, or other enhancement tools.

S’More users can also police online dating behavior by giving their matches a thumbs-up or thumbs-down rating. Their overall rating will appear at the top of their dating profile and hold bad characters accountable for their actions.

This rating system gives singles an incentive to be on their best behavior and spread goodwill. As a result, about 92% of S’More users have a rating score of at least 4 out of 5 stars.

S’More takes pride in having a market demographic of everyone. The app is available to single adults of all gender identities, sexual orientations, and dating lifestyles. Anyone looking for a quality dating experience and meaningful relationships will be well served by this community.

“When we add features to the app, we want to make sure we’re considering all perspectives,” Adam said. “That to me is fundamental. I don’t think you can have a successful dating brand today and not be inclusive.”

The S’More team is passionate about creating new solutions to improve online dating.

As the CEO of a tech startup, Adam had made sure to foster inclusivity and diversity in his team since day one. He has hired software developers, marketing experts, and operation managers who come from all over the world — from India to South Africa.

The team members also identify across the sexuality spectrum and are deliberate about making sure no one feels left out of the S’More mission. As Adam said, “Equality is baked into our brand.”

The S’More team is constantly brainstorming new solutions to improve the online dating experience. These dating experts are passionate about disrupting the industry and building a social brand that is anti-superficial and pro-relationship.

One of the ways the S’More team engages with modern daters is through its S’More Live Happy Hour on IGTV. This live celebrity dating show has been running for 35 episodes and features a ton of personal dating stories, games, and tips to let people know they’re not alone in the swiping struggle.

“I wanted to conceive S’More as an environment that felt equal for everyone,” Adam said. “It’s important to have a team with a diverse background because that’s how you end up with a product that feels like it’s made for everyone.”

Fostering a Nonjudgmental Space Where Everyone is Equal

The S’More team has made headlines and gotten user attention by expanding the dating profile to feature more than a simple headshot and a bio. Thanks to its personality-driven matchmaking, S’More has positioned itself at the forefront of the anti-superficial movement in the online dating industry.

So far, many relationship-minded singles have embraced the S’More dating app. Within the first six months of launching out of beta, the app broke into the top 200 in the App Store, and industry experts have hailed it as “the dating app for people who don’t like dating apps.”

The S’More app encourages singles not to judge a profile by its picture.

A Black woman recently reached out to the S’More team to say she’d fallen in love on the app. She liked the man’s dating profile because of his interest in rap music and break dancing. She also listened to his voice recordings and thought he sounded sexy.

Once matched, the couple chatted for long hours on a Thursday night. It wasn’t until the next morning that the woman checked her match’s newly unblurred photos. She had always dated Black men, so she was surprised to see that her online crush was Asian.

After some initial shock, the woman decided to set her racial bias aside and pursue the connection. She said she is now happily in love and in an interracial relationship.

“Never in a million years would I have swiped on this guy on any other dating app,” she told the S’More team.

This success story demonstrates what S’More endeavors to create by removing photos from the early stages of the conversation. Its matching process asks users to set aside their preconceived notions about their type or their ideal date and simply start talking to people who seem interesting.

Online daters have nothing to lose and everything to gain by giving each other a chance and withholding judgment for at least as long as it takes to say hello.

S’More Goes Beyond the Surface to Create Authentic Connections

Adam has worked in the dating industry for over a decade, and now he’s leveraging his experience to improve today’s fast-paced swiping culture. As Founder and CEO of S’More, Adam has tackled some of the major issues with online dating and developed a matchmaking system that relies more on personality than photo galleries to spark a mutual connection.

S’More is about to announce that it has closed its multi-million dollar seed round of funding and established itself as a contender in the industry. The startup group is intent on using its current momentum to bring more helpful features, more interesting conversations, and more successful relationships to the modern dating scene.

“It’s that magic when you suspend judgment — for just a few minutes,” Adam said. “You’re able to have these amazing conversations and connect with someone.”