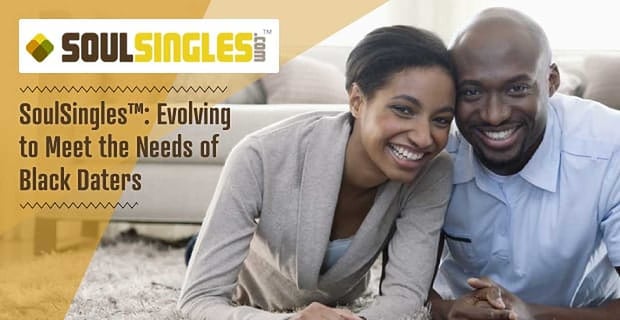 The Short Version: SoulSingles, part of the larger World Singles Networks, serves the black community across the U.S. and abroad by providing a platform for daters to meet and match. As technology and the way people connect has changed, SoulSingles has evolved to stay on top of the digital trends — creating an all-new dating app for iOS and Android and regularly updating their site to be more responsive and user-friendly for their ever-growing audience.

In a city of 8 million people, Teresa wasn’t finding someone in New York who clicked with her. She decided to give online dating a try and created a profile on SoulSingles.com, which allows for very specific details to be included, such as ethnic roots and musical preference. When she started chatting with a man in Los Angeles, she had her doubts that long distance, or love, would stick.

Despite a nation between them, Teresa and her boyfriend were able to connect on a deeper level. Two years later, he proposed, and Teresa couldn’t be more pleased with her decision to sign up for the site.

SoulSingles has carved out a place for black daters to find and connect with those seeking a meaningful relationship. Site users credit it as a safe space to meet compatible single black people for dating or friendship. For 15 years, World Singles Networks has worked to create communities of inclusion for single people in various minority groups, and SoulSingles has remained one of their most popular and diverse dating websites.

Recently, we spoke with CEO Darren Romeo, who talked about the shift he has seen on SoulSingles and his other sites as daters move beyond their traditional ideal match requirements in dating. Singles are testing boundaries with the location, language, age, and income differences of potential matches and emphasizing the importance of shared values and experiences more so than superficial demographics.

With this shift, Darren has challenged his team at World Singles Networks, and more specifically within SoulSingles, to develop better tools for singles to find love, beyond the usual stereotypes and assumption that do nothing but limit our possibilites. Working toward this goal, SoulSingles updates their website to reflect the features most needed in the evolving world of online dating, which includes creating an app for iOS and Android.

Whether from the deep South, Detroit, the Caribbean, or various locations overseas, members on SoulSingles represent a broad range of ethnicities and a rich cultural diversity. However, in recent years, Darren has noticed a new trend in flexibility among the users on World Singles Networks’ sites.

“The world is getting smaller in a positive way,” Darren said. “Our data is suggesting that people are open to a broader experience, including who people would consider a possible match.”

Across the site, SoulSingles makes it easy to view personal activity as well as those of other users.

Most of his websites, including SoulSingles, now offer users the ability to opt-in to a larger pool of prospects with World+, which enables singles to see search and match results from across the World Singles Networks database, which includes singles in the Greek, Ghanian, Iranian, Armenian and Arab diasporas.

“What we initially saw was that SoulSingles users who were typically from the South were looking for folks who could relate to a Southern experience, for instance, and that’s diverging,” Darren said, explaining the site’s historical data. “It’s optimistic.”

He thinks more people are branching out to escape what he describes as the echo chamber of today’s digital landscape with segmented marketing and social networks. While black daters turn to SoulSingles to find someone who better understands their cultural perspective, the willingness to chat with a black Brit, for example, is a sign of a broader exploration of the Diaspora taking place in this community.

SoulSingles has always been one of the most diverse dating site in the World Singles Networks, which includes the popular brands Iranian Personals and Arab Lounge. Darren told us that, collectively, the 500,000 SoulSingles members have roots reaching into every part of the world.

As his team continues to analyze the markets World Singles Networks serves, Darren sets goals for the company to provide safe and inclusive spaces for their singles.

For example, 10-15 different languages are spoken throughout the company, and the ethnic and cultural backgrounds of team members on staff reflect the communities represented by the different World Singles Networks sites. The company also turned their engineering role into a remote position to open opportunities for applicants who might have previously been limited by geography.

Darren pointed out that design and engineering have the most to gain from an infusion of different perspectives. Diverse representation for bigger-picture marketing and functionality can sometimes be overlooked in those departments.

“When there’s not a photo on a profile, the default typically might suggest a Caucasian person,” Darren said. “There’s a lot of subtleties in technology with icons, so we’ve set a goal to really question assumptions and what is meant by ‘the default.’”

As more people turn to mobile devices rather than desktop computers to carry out their social and web searches, SoulSingles has worked with the trend to ensure users can access the dating platform in a way that feels most natural.

The SoulSingles mobile application, available on iOS and Android, spun off the “Slideshow” part of the site to offer a Tinder-style game for matching with other single black people.

Within the app, users can connect by swiping approval on pictures of singles based on the chosen age range and location settings. Once members are mutually matched, they can begin messaging.

However, the entire feature set is also available through the SoulSingles website.

Based on member feedback and site usage analytics, SoulSingles has been updating their website to improve the experience. Most importantly, the site will be more responsive, adapting to different devices from tablets to PCs to mobile phones.

Darren explained that the responsive site updates are targeted to get everything right for users. The site will be highlighting the most used features better with clean navigation for viewing messages and profiles. The site will also be implementing a history function to help users keep track of their interactions and activity on the site.

SoulSingles has always prided themselves on a high level of safety for their users. When a profile is created, several computer checkpoints, including verifying an email address and adding a profile photo, are triggered before someone can use the site. Additional red flags are raised by more sophisticated text recognition and improved abuse reporting.

Messaging is made safer with computer algorithms that analyze text and alert to fraudulent activity.

“Some of the machine algorithms are starting to get better results than humans,” Darren said. “So we’re shifting those roles to find ways for people to work better with the algorithms.”

From the beginning, SoulSingles has hand-screened its profiles, and while computers have helped to expedite the process, there is still a personal touch as users are reviewed upon joining the site.

Users Find Love Through the Community on SoulSingles

Teresa found love thanks to SoulSingles, and judging by the feedback on the site’s Success Stories page, many others have also found their match.

SoulSingles hopes to remain a safe and fun place for black users to connect through its diverse community from all over the U.S. and abroad.

As their users have evolved to date beyond local neighborhoods, SoulSingles has adapted by releasing an app and updating the site to better serve a community seeking to find love.