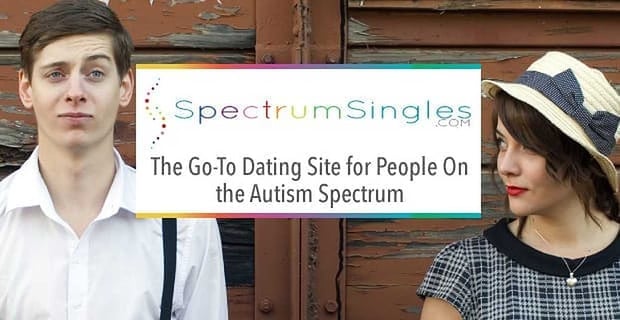 SpectrumSingles: The Go-To Dating Site for People On the Autism Spectrum

The 411: Introducing SpectrumSingles.com: a safe, affordable and comfortable environment for singles on the autism spectrum to find someone who is compatible in every way. By narrowing the dating field and making unique matches for specific users, meeting a lifelong partner just got much easier.

Because it can be so difficult to determine the level of compatibility of a potential friend or partner on the spectrum through methods of conventional social media and online dating services, SpectrumSingles.com has changed the game for the better.

With their innovative Spectrum Compatibility Test™, the work is done for you, reducing prospects from thousands to a select group of spectrum-compatible matches with whom you can build a quality relationship.

Not only is SpectrumSingles revolutionary, but it is also extremely safe. As a members-only website, there are certain features than can and can’t be used depending on your participation and dedication to the website.

They offer a variety of affordable memberships to accommodate different budgets, including a free membership with basic services. It is set apart from other dating/social sites because they do not purchase profiles or create fake profiles on their site. What you see is what you get.

We spoke with co-founder Olivia Cantu to get the inside scoop on what makes SpectrumSingles so original and special. She and her mother, Kirsten Fitzpatrick, also a co-founder, are both on the spectrum themselves, so they add a refreshingly honest and personal touch to the site.

SpectrumSingles essentially came about because Cantu and her mother found it difficult to explain to friends and family members who weren’t autistic what issues they were having or why they needed to have some space during times of anxiety.

On top of that, there was no dating site that had an individualized system of finding autistic individuals a match based on behavioral characteristics.

SpectrumSingles.com is a unique dating and social media site created BY people and FOR people on the spectrum.

“Originally we did find dating sites like that, but the problem was a lot of them put people on the autism spectrum in a really negative light,” Cantu said. “It didn’t feel welcoming. Those people weren’t on the spectrum, so they didn’t quite understand the audience they were trying to reach out to.”

They knew it would be much easier if they could explain their problems and experiences to someone on the same spectrum because they would completely understand.

After questioning why there wasn’t already something similar to a dating or social media site for people on the autism spectrum, Cantu and Fitzpatrick decided to take matters into their own hands.

A Personal Touch Every Step of the Way

Because SpectrumSingles is a paid membership-based site, the only free features are basic things like looking at messages or using the chat function.

Cantu said they want to maintain a very safe and secure environment, so everything else, such as contact with the members, requires a paid membership. The cost of a monthly membership is less than $10, comparable to the price Match.com charged 20 years ago!

When you do become a member, there are more advanced features like private messaging and bookmarking.

You are also able to write blogs, add photos and engage in the forums. They plan to add more features as they grow as a dating site.

Besides the fact that this is a one-of-a-kind dating site for individuals on the autism spectrum, Cantu said they stand out because they are very personal with the SpectrumSingles community.

“We take time to personally review every profile that comes in,” Cantu said. “We connect through Facebook, we do YouTube videos and we also have our Spectrum Compatibility Test™, which asks a lot of the typical dating questions but also asks questions that wouldn’t normally be as important to some people.”

This is the main feature that sets SpectrumSingles apart from other dating sites. The 184-question Spectrum Compatibility Test™ is essentially a prerequisite for creating a profile, which Cantu established in order to match members based on a variety of the spectrum attributes. Upon completing the test, the member is assigned a color based on their form of autism. Cantu, for example, is a Blue.

Typically, it will be arranged so the user can communicate with other members who have the same color identification, but it is also possible to branch out. It is optional to include other colors of the spectrum in their match results so members of those classifications know they might be interested.

The innovative Spectrum Compatibility Test ™ narrows the field from thousands of prospects to match your spectrum attributes with a select group of spectrum compatible matches.

The test helps narrow the search down by grouping individuals together based on characteristics or tendencies such as these.

“Some people have asked us about the meaning of the colors with the results of the Spectrum Compatibility Test. The only function of the colors is to match members to other members with similar spectrum attributes. When members create their profile, they can select other specific attributes, which narrow down the matches even further,” Fitzpatrick said. “We purposely chose not to ‘label’ or ‘categorize’ the results. We felt that those of us on the spectrum have been labeled our whole lives. In our experience, categorical labeling can result in some people being unable to perceive a person individually from that label. This is common in mainstream society but is not an environment we wanted to create within the SpectrumSingles community. We do not discriminate against anyone and do not tolerate discrimination of any kind within the community.”

Bringing the Community Together

Right now SpectrumSingles is still growing, but within the first couple days of getting real press after creating the site, they received a lot of positive feedback from the community.

According to Cantu, supporters would say things like, “My child is on the autism spectrum, and I don’t know what kind of future he’ll have, but now that I see this kind of stuff out here, I don’t worry.” Others would emphasize the aspect of understanding and say, “I can connect to these people. There’s finally someone who gets these issues that I have.”

“We really want to bring the community together,” Cantu said. “There are some who prefer to be of one side on the spectrum, like Asperger’s syndrome, and then they may separate themselves from plastic autism. We want to bring everyone together.”

SpectrumSingles is currently crowd-funded, but that’s not stopping Cantu and Fitzpatrick from constantly working to improve the Spectrum Compatibility Test™ and the website’s features.

And because the site is for relationships and friendships, they hope to eventually separate it as well, making it easier for users to navigate between the two.

“We have been listening to our members on improvement suggestions for the site and plan on implementing these changes when funding permits. Our members share in the creative process of the site, and their contributions are invaluable,” Fitzpatrick said. “We are proud of the sheer talent within our community and hope, as the site grows, we can employ members of our community to be part of the SpectrumSingles team. Jobs are needed within our community, and we hope we can eventually be in a position to provide those much needed jobs in the near future”

The future of dating for those on the autism spectrum is bright because of SpectrumSingles’ ability to identify the uniqueness of each individual and meet the needs of every person based on their individual situation.