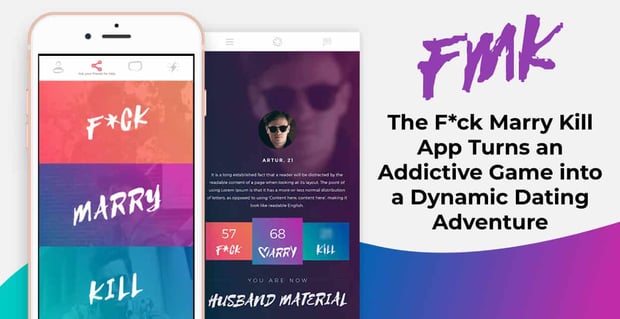 The Short Version: An app called F*ck Marry Kill (FMK) has made a splash in the online dating scene by giving singles three clear choices. Now singles who are interested in banging or looking for something serious can say so upfront and make their intentions known each time they match with someone. F*ck Marry Kill has appealed to thousands of 20-something singles who are tired of traditional swiping and want to try a fun new way to meet people.

When standing in long lines or waiting for college classes to start, my friends and I always liked to pass the time by listing three celebrities, athletes, politicians, superheroes, or Disney villains and then posing the age-old question: Who would you bang, marry, or kill?

This game is popular among young people because it reveals a lot about someone’s priorities, preferences, and pretty peculiar taste in men or women. It can also prompt some deep self-reflection.

For instance, I never thought I’d want to kill Neil deGrasse Tyson, but if it meant I could spark a connection with a young Nikola Tesla and live happily ever after with Bill Nye the Science Guy — well, sacrifices have to be made.

Such brain teasers can help friends pass the time, start conversations, and entertain themselves, and now this game can help them find dates online as well. The F*ck Marry Kill app (FMK) has taken a beloved social game and turned it into a swiping sensation in the online dating scene.

FMK offers three simple swiping choices for three dating profiles, and singles can choose if they’d like to marry, f*ck, or kill (aka reject) potential matches. Don’t overthink this silly game — it’s all in good fun. The singles you match with using the “marry” option won’t immediately get down on one knee, the f*ck option doesn’t mean you’re obliged to have sex, and no actual killing is involved.

Young singles enjoy FMK’s fun twist on online dating because it helps them get out of their comfort zones a little and explore date options like never before. The free app sparks conversations and challenges dating assumptions, and it can also lead to hookups, relationships, or even marriages in the right hands.

A Fun Swiping Experience for a New Generation of Singles

Joining F*ck Marry Kill is simple and takes less than a minute. The app is free to download on Google Play, and you can create a FMK dating profile by linking to your Facebook account, Instagram account, or email address. You’ll need to provide your birthdate, gender, and the gender(s) you want to date, plus provide at least one profile picture from your phone’s photo gallery.

Once you’ve got your profile up and running, you can start playing the FMK game with real dating profiles of people who meet your match criteria for age, gender, and location.

You’ll see three photos stacked on top of each other, and you’ll tap on them to assign each one to the proper FMK category. You can also press and hold on a photo to see the entire profile if you’re on the fence about someone. You’ll be alerted with a notification if you receive a match or message.

You can also upgrade your FMK experience by taking the University Challenge and competing against other universities to see which school has the hottest students and alumni. So far the hottest school has a hotness rating of 86% — think you can beat that? Then link your FMK profile to your school and invite your friends to do the same.

The FMK app is fast-paced, straightforward, and streamlined to encourage conversations and connections. It takes less than a minute to create a free account, play the f*ck-marry-kill game, and start matching with people who share a similar sense of fun and excitement in the online dating scene.

As an up-and-coming dating game, FMK has a lot to offer modern singles, and its membership base grows larger and more active all the time. The FMK app rewards the most active users — those who log in every day — with perks, including a free boost, winks, and access to more profiles.

FMK is an independently run dating app designed by an imaginative team in Portugal, and it welcomes feedback on its design, match system, user base, and other features. You can go into your settings and click the Send Us Feedback button to give your opinion and help the team figure out what they’re doing right and where they can improve.

The FMK app has many fans in the online dating scene. Reviewers have hailed it as a refreshing change of pace and an edgy social experiment, and users seem pretty psyched about it as well. The FMK app has an average rating of 4.4 stars on Google Play, and many reviews say it won them over with its fun and fluid interface.

Singles can see their FMK matches and messages in one clean interface.

“Super fun to play!” said Ryan E. in a five-star review. “I have other friends [who] would enjoy this dating game app too.”

“It’s better than other matching apps because you take it like a game, which makes it more fun,” Nuno M. said. “There is no pressure!”

Many tech-savvy singles recognize the dating app’s potential to bring more excitement and flirtation to online conversations by making matches aware that they’re both interested in potentially having sex or getting married. It takes away the guessing games and replaces it with a lighthearted would-you-rather matchmaking game.

The FMK community is quirky, experimental, and open to new experiences, and that makes it an ideal dating environment for young people in the mood to flirt.

Whether you’re looking for a hot date, a sexy chat, or a first date with real potential, the FMK app can help you sort your options in a way that makes sense and grabs attention. Instead of dipping your toe in the swiping scene, you can do a cannonball and make your intentions known on F*ck Marry Kill.

First impressions matter a great deal in the online dating scene, and the FMK app invites people to follow their instincts, pursue their desires, and meet hot singles in a playful and exciting dating atmosphere. The free app has gamified the online dating experience to make it more fun and social for young digital natives.

FMK has pushed the boundaries of what defines a dating app, and thousands of singles have played along and become addicted to this new way to date. Whether you’re swiping on your own or playing FMK with your friends, you can explore the local dating scene with more confidence than ever before thanks to this dynamic social app.

“Generation Z uses mobile devices for chatting, commenting, gaming, and interactions with friends,” the FMK team explained. “So why should dating be such a lonely activity? Why can’t we approach the ‘meet new people’ activities in a more relaxed, social and fun way?”