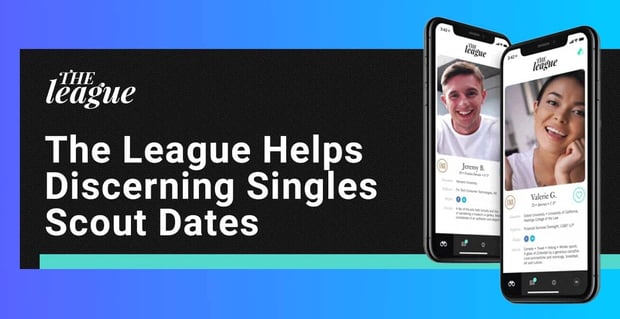 The Short Version: The League is a dating platform designed for ambitious singles who hope to find a partner as motivated as they are. The selective membership and authentication process ensures that users spend less time matching with unsuitable partners and more time discovering a romantic spark. Features like Daily Prospects and Mini Dates help singles find viable matches in a way that’s both efficient and fun. In the wake of the pandemic, The League has built robust video features to encourage singles to connect and flirt face to face and in real time.

In 2019, Tory was single and fed up with dating sites. She was getting over a failed long-term relationship and wanted to start fresh, but she wasn’t getting any positive results from casual swiping apps.

Tory joined The League, a dating app for young professionals, to raise the caliber of her matches and find a partner who would take her to jazz clubs and travel the world with her. That’s how she met Anthony. The couple hit things off on the app and spent three hours absorbed in conversation on their first date.

Anthony popped the question to Tory a year after meeting her on The League.

They both loved jazz. Check! They were both well-traveled. Check! And, most importantly, they were both looking for a serious relationship. Check! Finally, Tory discovered a love match that wouldn’t waste her time.

The LeagueLove blog describes how Anthony and Tory traveled to Dubai, London, Singapore, and other world destinations before returning to the bench where they first said “I love you.” That’s where Anthony proposed, and Tory said yes.

That type of remarkable dating experience is part of the promise The League makes to its members. The dating platform’s very name appeals to singles who are tired of dating below their status and want to bring more quality to their romantic options.

“If you find yourself in a League relationship, you know you didn’t settle. And you’ll never have to wonder who else you may have found if you just kept swiping,” said Marko Krosnjar, The League’s Chief of Staff.

Anthony and Tory’s love story is a perfect example of the type of partnerships that thrive thanks to The League. Singles of all ages and orientations can join this network to find the other half of their next power couple.

The League is an elite community where ambition meets ambition, intellect matches intellect, and success leads to greater success.

“The search and selection of an equal partner is one of the most important decisions our users will make in their lives, so we help individuals connect with a community of others who are just as smart and driven as they are,” Marko told us.

A Safe Platform with Authentic Profiles

The League offers unparalleled protections in the online dating scene. New users can verify their dating profiles through Facebook and LinkedIn, so cases of fraud are very rare and easily caught. The platform can verify a person’s name, age, job title, and all sorts of other details by linking to social media.

The League also automatically hides Facebook friends and LinkedIn connections from users, so singles don’t have to worry about any awkward encounters.

The League emphasizes efficiency and safety in the online dating scene.

According to The League’s user data, the majority of app users work in the tech world or the financial sector. The top employers are Google, Facebook, Apple, Ernst & Young, and PricewaterhouseCoopers. A fair number of self-employed entrepreneurs and freelancers mingle on the app as well.

“We create a curated community of professional singles seeking an equally ambitious and driven partner,” Marko said. “We work hard to make sure The League is chock-full of highly educated, career-oriented individuals who are seeking an elevated dating experience.”

The League’s membership is famously selective. Before gaining access to the app’s swipe list, potential users are placed on a waiting list. A team member must review and approve the profile’s credentials before it can become part of the community.

The majority of app users have serious dating intentions and want to invest in the online dating process to find a compatible long-term partner. These single professionals often don’t have the time, energy, or inclination to wander from bar to bar for a date, so they rely on The League to do the scouting on their behalf and preselect the most promising date options.

“The League isn’t about excluding people, it’s about enabling the busiest of folks to efficiently find each other,” Marko told us. “They are people who see their search for a life partner as one of the most important investments of their life.”

The League wanted to change the tone of online dating by slowing it down and eliminating thoughtless swiping. Other apps may treat matchmaking like a game of Hot or Not, but that’s not this app’s angle.

All matches made on The League are under a time crunch. Users only have 14 days to strike up a conversation and either exchange phone numbers or arrange a date. After the two-week period is up, the conversation will disappear.

The League has recently developed video date features and speed dating events on the app.

The League also limits how many profiles a single person can see in a day. The app releases five Daily Prospects during its happy hour at 5 p.m. During this time, app users can discover new match suggestions and swipe according to their interests. Every match is curated based on a combination of profile information and user activity.

“You get to vote on them and connect,” Marko said. “You do not have to jump in a sea of boats and move them out of the way to see the next one. Why see a dingy when you are looking for a yacht?”

Not into text chatting? Then perhaps you’ll do better with League Live, a speed dating feature on the app.

League Live challenges users to go on three-minute video dates and see if they make a meaningful connection. These minidates can save singles a lot of time and energy in the dating scene. It’s an opportunity to meet a person who is actually interested in talking and finding a quality partner.

If both users like each other after their minidate, The League will notify them of the match, so they can continue the conversation and build on that relationship. They can even use the app’s video chat feature to have a longer virtual date outside of the speed dating framework.

League Live launched in 2020 to give singles in lockdown a way to up their chances of meeting someone special during a pandemic.

Based on The New York Times’ wedding database, The League is 1,082 times more efficient than other dating platforms. With statistics like these, it’s no surprise that successful singles continue to flock to the platform.

The League’s Founder and CEO Amanda Bradford started this dating app to empower single professionals to date with authority and confidence. She has pledged to help singles, like Tory and Anthony, as they look for a true equal in the dating world.

The League offers a safe space where smart and successful singles can be who they are without dumbing themselves down or settling for a less-than-stellar match.

“It’s not uncommon for women to feel the need to ‘tone down’ our intelligence, opinions, and career ambitions so as to not scare guys off,” Amanda wrote in The League’s mission statement. “The League’s heavily scrutinized admissions-based model is our attempt to create a founding community of high-achieving, diverse, and influential members that will serve as trailblazers to help change the conventional gender views.”

As the world begins to move toward a post-pandemic future, The League has big plans to increase connections and support highly effective dating. Users can expect the app to launch self-help resources, a premium membership tier, and new communication features, including voice memos and GIFs, in the coming year. Additionally, the team is working on fun quizzes to increase the accuracy of the matching algorithm.

“Striving toward and sustaining such an incredibly important mission is just one of the many reasons that working for The League is so fun and worthwhile,” Marko told us. “League users know what they want, and we believe that’s a good thing. While some may call us particular, persnickety, or elite, that confidence is exactly what makes our community special.”