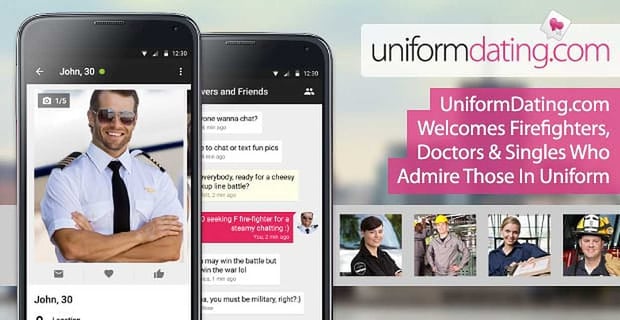 Everyone Needs a Hero — UniformDating.com Welcomes Firefighters, Doctors & Singles Who Admire Those in Uniform

The Short Version: Enlist in UniformDating.com to surround yourself with upstanding singles who value service in the military, law enforcement, and community. With the motto “everyone needs a hero,” this niche dating site cultivates a unique user base of 2.2 million singles, including military personnel, doctors, nurses, firefighters, police officers, and anyone who gets dressed to the nines for work. The site’s blog content facilitates dates and relationships by offering helpful tips and funny icebreakers that cater to specific professions. With a focus on hooking up heroes, UniformDating.com brings together men and women in uniform as well as those who admire them.

Katherine Tilbrook joined UniformDating.com because she was ready for a commitment, and she had her sights set on a man in uniform. When she met Army Captain Austin Hind, their initial nervousness soon blossomed into love.

“It wasn’t quite love at first sight — more fear, we think,” Katherine remembered.

Katherine and Austin got married in Quebec’s ice hotel after meeting on UniformDating.com.

One December, the couple toured the World’s Biggest TeePee in Medicine Hat, Canada. It was a frigid 18 degrees outside, but Austin’s palms were clammy. With an anxious smile, he came to a halt at the center of the teepee.

Snowflakes shone like stars in Kate’s dark hair as Austin got down on one knee. He’d chosen to propose in the snow because their first date had been a walk through the snow. Their wedding, too, adopted a winter wonderland theme.

The intimate ceremony (attended by just seven people, including Kate and Austin) took place at the Hotel de Glace — known as Quebec’s ice hotel. It was minus 5 degrees that afternoon, but the bride and groom hardly felt the cold, warmed as they were by the love they shared.

Katherine and Austin’s fairytale romance was made possible because of a truly unique niche dating site.

In the U.K., UniformDating.com helps men and women in uniform (and their admirers) find romance online. The site’s parent company, NSI Holdings, is well known for brands such as Cupid.com and MatureDating.com.

Tatiana Mikhalchuk is the PR Manager of NSI Holdings, the parent company of UniformDating.

Founded in 2004, UniformDating.com offers support and networking to people who commit their lives to doing good works in the community or the military. From doctors to U.S. naval officers, the site has over 2.2 million registered users  and nearly 130,000 Facebook fans mingling freely online.

The site welcomes singles of all stripes: whether you don a uniform yourself or simply find men/women in uniforms attractive.

“There are a lot of people who have specific professions that have a great impact on their personal lives,” Tatiana Mikhalchuk, PR Manager, told us. “These people have unique missions in their lives, and we understand that such people need and deserve someone who understands what they do — and what they do it for.”

The site’s motto is “Everyone needs a hero,” and the team’s mission is to bring together everyday heroes (firefighters, pilots, nurses, doctors, etc.) in an open online forum.

Users of UniformDating.com register and flirt for free with people attracted to a life of service.

The user base overall is a spattering of careers including pilots, dentists, naval officers, and nurses. Despite their different career paths, users bond over a mutual respect for men and women in uniform.

“We set a high value on every person,” Tatiana stated, “and work hard to provide them with interesting and useful content as well as with an opportunity to meet someone special on UniformDating.com.”

Career-Oriented Individuals Can Join and Flirt in 5 Steps

UniformDating.com is easy to join and interact on, with simple features and a quick setup. It takes less than a minute to fill out the five required text boxes:

Then hit “enter” and you’re in. You’ll be sent a verification email, and then you can start setting up your profile, filling in your bio, favorite things, and other optional personal details. You can also rate yourself as “Average,” “Attractive,” or “Very Attractive” to garner more attention from browsing singles.

From choosing “A Word That Describes Me” or writing “A Bit About Me” in your own words, the profile covers multiple aspects of an individual’s personality in unique and fun ways.

Singles can broaden their flirting horizons with a monthly subscription lasting one to six months.

At UniformDating.com, you’ll start out as a Standard Member, able to customize your profile and browse the entire site for free. To send unlimited personal messages and use the live chat room, users need to upgrade to Full Membership.

“We decided to create a platform where people understand each other better because they have common lifestyles, problems, and visions,” said Anastasia Iarkova, Head of Marketing at NSI.

Sharing values of service and selflessness, many of the people on this platform dedicate their lives to helping others and seek someone who understands that drive.

How to Get a Date: Generate an Icebreaker to Chat Up Your Crush

With the Icebreaker feature, users can get an instant funny chat-up line from UniformDating.com. You simply click your profession (or the profession of the person you want to impress), and then click the “generate” button. A catered flirt will pop up for you.

Even if you don’t use the one-liners in your messages, they’re still fun to read.

Those are just a few of the witty, ridiculous, original, and entertaining chat-up lines available at the press of a button at UniformDating.com. You won’t stumble over what to say in an opening message with these apt prompts at your disposal.

“The Icebreakers help singles find necessary words that will catch the attention of the addressee,” Anastasia explained. “So if a person is struggling on how to start a conversation, they can generate funny chat-up lines.”

How to Get a Relationship: Tips on Dating Someone in Uniform

Once you’ve gotten a date, maybe even formed the basis of a relationship, you might still find yourself in need of guidance. Dating men and women in uniform has distinct benefits and pitfalls. Before you encounter serious scheduling conflicts with doctors or safety concerns with police officers, UniformDating.com wants to let singles know what to expect.

Organized by profession, the site provides tips for anyone dating someone in uniform like “7 Smart Tips for Dating Modern Military Men” or “7 Rules for Dating a Police Officer.” Supportive articles tackle specific issues relating to flyboys, military personnel, firefighters, doctors, and other uniformed individuals.

“We understand that it’s not so easy to build a relationship with someone whose work is connected with a uniform,” Tatiana said. “That’s why we prepared lists of tips that would help to communicate with representatives of each group of people.”

These tips can include insights such as:

The blog further explores relevant topics like “Why We’re Drawn to Men in Uniform.” With multiple perspectives and a wide array of topics, UniformDating.com expands the dating knowledge of readers so they’re prepped for a successful dating experience.

“We include useful information about what you should know about representatives of specific professions,” she explained, “such as how to date them and what kind of relationships you would have with them.”

Uniforms are a turn-on — that’s why you’ll often see a fleet of sexy nurses and hunky firemen at Halloween parties. Something about them just make you look sharp and seem more respectable. Whether you’re in army fatigues or hospital scrubs, UniformDating.com lets you strut your stuff among an admiring and like-minded audience of singles.

“The website has a pretty big and loyal community that grows every day,” Tatiana said. “Since its start in 2004, UniformDating.com has sparked thousands of successful love stories.”

Who knows, one day you could be among the site’s success stories right alongside Katherine and Austin. It may not be a magical ice palace wedding, but a simple icebreaker could do the trick to get conversation flowing and start a romantic journey all your own. Many everyday heroes await you online at UniformDating.com, where shared values is simply a way of life.