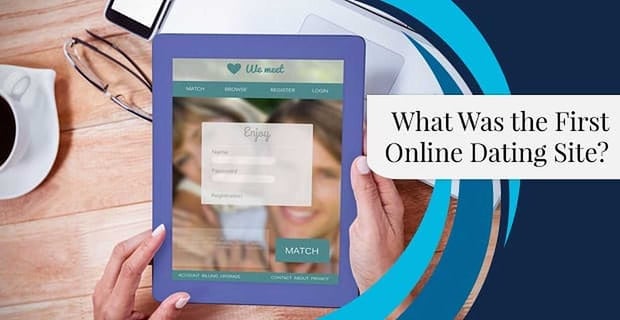 What Was the First Online Dating Site? (A Brief Timeline)

Online dating has become such a major part of the single lifestyle and couples love stories — 40% of American couples meet online — that it can be easy to forget what dating was like before it came along. We had to actually go up to strangers in bars and at events, get set up by our friends and family, and use personal ads in newspapers.That sounds exhausting!

But which dating site started it all? Which dating site do we have to thank for making our dating lives so much easier and less awkward? Here are some important facts about the first dating site ever created and how it changed the world.

Match the company was founded in 1993 by entrepreneurs Gary Kremen and Peng T. Ong, and the site was launched two years later as the first official dating site. The subscription model, which most dating sites use now, was part of the initial business scope, and a diverse group of people were part of the first trial, including women, tech professionals, and lesbian and gay singles. Most of these users were given a free lifetime membership.

Below you’ll find Match’s most up-to-date prices, matching system, and user base:

Match was profiled by Wired magazine when it launched in 1995, and writer Todd Krieger said at the time that the service was “turning the heads of those in the human connections business.” Trish McDermott, of the International Society of Introduction Services, told him: “Being able to control the process and take away the economic barriers — precisely what Match.com does — addresses two of the major problems in the dating service industry.”

Match didn’t lose steam after launching — it only gained more traction. By 2004, it was called the largest dating site in the world by Guinness World Records. With 29.6 million unique visitors at the time, Match had three times as many visitors as its closest competitor.

In addition, Match was number 37 on comScore’s ranking of all web properties, and it was the only dating site to crack the top 100. According to IAC, which owns Match, “comScore Media Metrix data are based on a global panel of more than 1.5 million Internet users. Worldwide data cited herein represent an aggregate of 32 countries reported on a monthly basis.”

Match Created an Android App in 2010

Within the next few years, Match took its platform to the next level by creating a smartphone app for Android users. You can get it for free on Google Play, and it has almost 4 stars out of 5.

King Nass wrote in his review, “Paid for it. Met lots of females. It is not fake. It is all real,” while DrB Shapero said, “Easy to use and seems reliable.”

Match is available for free via Google Play and the App Store.

Match also has an app available for iOS users, and it has 3.1 stars in the App Store. One satisfied user named Nsen74 said: “I did meet someone on here, and the relationship did last almost five years.”

In 2011, OkCupid Was Acquired by Match

By 2011, Match was basically dominating the online dating space, and it solidified its reign even more by purchasing OkCupid, a 100% free dating site, for $50 million in cash. At the time, IAC called OkCupid, “the fastest growing dating site in the advertising-based category.”

Sam Yagan, founder of OkCupid, eventually took over as Match’s CEO, and now he serves as the Vice-Chairman of IAC’s Match Group, which includes brands like Tinder, OurTime, and Pairs.

The following year, Match wanted to expand its offerings to include in-person matching, so the team created Stir live events, which are held in numerous cities in the US.

Stir events are held in cities across the country and can be happy hours, bowling nights, trivia competitions, and similar activities.

Match paid $575 million cash to add another sister site to its portfolio in 2015. This site was Vancouver-based PlentyOfFish (POF), which was created and run by Markus Frind.

Sam Yagan told BusinessInsider that he’d been looking to acquire POF since 2014: “As more people than ever use more dating apps than ever with more frequency than ever, PlentyOfFish’s addition both brings new members into our family of products and deepens the lifetime relationship we have with our users across our portfolio.”

They certainly have expanded. Today, Match Group owns the swipe-happy dating app Tinder and the relationship-focused dating app Hinge, among other big-name brands.

Today, Match is Responsible for More Romantic Connections Than Any Other Dating Site

Match’s story is nowhere near finished, but now you’ve got some insights into how the first dating site was created and the journey it’s been on for well over two decades now. Today, Match says it’s responsible for one in three new relationships. The site has millions of members in more than 190 countries, and it’s available in 40 languages. Match Group is headquartered in Dallas, with offices in West Hollywood, San Francisco, Tokyo, Rio de Janeiro, and Beijing.

Match.com was the first dating site on the scene in the 1990s, and it’s been leading the pack ever since.