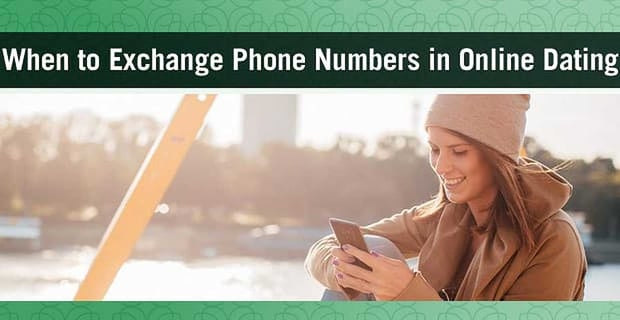 When to Exchange Phone Numbers in Online Dating

When one of my friends connects with a guy she likes on a dating site, she normally exchanges phone numbers right away. However, she’s recently had to rethink her process.

After texting with one match, she started to realize they weren’t really right for each other — her reasons included that he’s a smoker and she’s not. She let him down as nicely as she could, but he didn’t take it well. He wouldn’t stop texting her, saying he thinks they’re meant to be and she’s making a mistake. He even went as low as calling her names — you can guess which ones.

Lots of singles have had similar experiences, and most aren’t sure when, in general, is the right time to give out their phone number. Our experts and I are here to help clear up some of the confusion.

While my friend liked to exchange numbers around the first day of finding a match, it’s probably best to message him or her on the platform for a few days or a week before doing so. There’s really no need to give out your number, or get someone else’s number, if you’re not planning the first date yet.

Take this time to ask your potential date some questions, answer some questions yourself, and figure out if you’re truly into this person. You should also do a quick Google search to see what comes up when you type in his or her name. If you determine you’re no longer interested, it’ll be easier to let them down on the site or app. Plus, if he or she starts harassing you, like that guy did with my friend, you can always block and report them to customer support.

You Can Also Use an App to Get a Disposable Number

The good news is you don’t actually have to give out your personal phone number to an online match. Lots of apps out there will provide you with a secondary number, including Burner.

Here’s how it works: You’ll download the app and get a number (available in any US or Canadian area code), and then you’ll give that number to your match. When he or she calls you, Burner will intercept it. You’ll press the number one if you want to accept the call. You can also create, send, and respond to text messages on the app. Either way, the person will only see your Burner number.

Burner is one of several apps out there that will give you a second phone number to use when you want to keep your real number private.

Burner is available for iOS and Android, and it has a 4-star rating from users of both systems. Tiffany Rossi wrote: “Awesome app… it actually does what it says it is supposed to!” You have a variety of subscriptions to choose from, and the price all depends on the number of minutes, texts, and features you want to have.

Ultimately, Share Your Number When You’re Ready, But Make Sure You’re Doing So With Confidence!

My friend has now become a little choosier about who she exchanges numbers with and when — she doesn’t want to go through another nerve-wracking situation like that one time. The moral of the story is online daters should get a feel for their matches before giving out any personal information, let alone a phone number. Take a couple of days to message each other, and, when you’re ready to take the next step, consider using an app like Burner until you’re 100% comfortable with the person. Stay safe out there!

Woman Attacked by Guy from Match.com, Are You Safe?