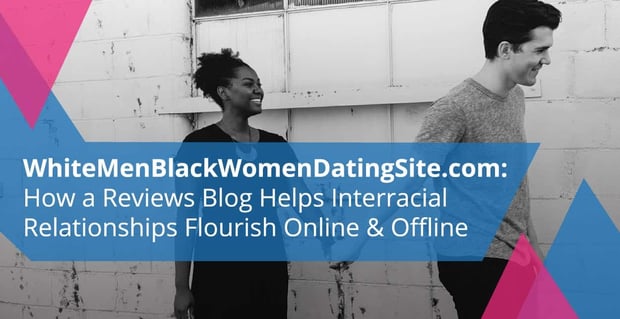 The Short Version: WhiteMenBlackWomenDatingSite.com is a source of information and guidance for white men interested in dating black women. The blog offers practical advice on everything from where to meet these women to how to make an interracial relationship work in the long run. WhiteMenBlackWomenDatingSite.com has ranked the top interracial dating sites, as well as other niche sites, to encourage singles to explore their options, get out of their comfort zones, and make a great match.

People like to say that opposites attract in the dating world, and that was certainly true for my older brother, who’s tall and pale, and his first girlfriend, a short, dark-skinned Haitian girl.

They were about as unlike as two people could be. She’s hot-headed and outgoing, while he’s more rational and introverted. But their relationship lasted for several years because they found happiness in balancing each other out.

While he was in his 20s, my brother discovered how attractive, dynamic, and fun black women can be in a relationship, and he’s not the only white guy out there with a hankering for chocolate.

“Every day, new interracial websites are set up,” according to WhiteMenBlackWomenDatingSite.com. “We have taken a lot of steps to give the best services to the people who are serious about [finding an] interracial relationship.”

Despite claims that we live in a post-racial society, race has remained an important factor in the modern dating scene. It can drive couples together, and it can tear them apart. Some dating resources have arisen to help singles bridge the divide between different cultural and ethnic backgrounds.

WhiteMenBlackWomenDatingSite.com endeavors to support singles who are willing to date outside their own race. As you can probably tell from its name, the site focuses specifically on white men and black women in the online dating scene.

You can think of WhiteMenBlackWomenDatingSite.com as a starter kit for beginners entering this niche dating world. Its reviews and advice articles let white singles know what they can expect as they swipe, match, and meet black singles.

Singles can read full reviews of interracial dating sites to learn the ins and outs.

The site’s editors have explored and tested many niche dating sites and curated a top-rated list to satisfy interracial daters. The reviews offer a breakdown of how each site works, what its membership base is like, and how much it costs, and all that information can help singles make an informed decision about which site best suits his or her needs.

“Thousands of couples have met, chatted, and hooked up via this awesome platform,” according to the Interracial Match full review. “It may not be the cheapest in the market, but the site guarantees a splendid experience.”

WhiteMenBlackWomenDatingSite.com doesn’t mince words when covering the movers and shakers in the online dating industry, and it offers a rating system from the perspective of interracial dating.

Anyone curious about how online dating works or how to find an interracial relationship can turn to WhiteMenBlackWomenDatingSite.com to get the 411. If you have any follow-up questions, get in touch with the team to set your mind and heart at ease.

All singles have to do is click Dating Tips on the website to access an archive of articles about the benefits and challenges of interracial dating. The blog taps upon a lot of frequently asked questions and common missteps in this niche. Its dating experts discuss not only how to meet a black woman but how to keep the love alive and overcome cultural differences.

Advice articles bring clarity to many complex aspects of dating.

The tone on the blog can lift singles up and arm them with information that will serve them well on interracial dating sites.

“With interracial dating sites, you don’t have to travel to meet your perfect soul mate,” the team said. “The internet has made the world a small village with the ability to communicate and relate to one another with ease.”

WhiteMenBlackWomenDatingSite.com provides instructions for online dating, and it also addresses hot-button issues, including things to never say to interracial couples. Every article can offer a takeaway and heartening message for singles who want to cross racial lines in the dating scene.

As a champion of love and an opponent of racism, WhiteMenBlackWomanDatingSite.com plays a crucial role in normalizing interracial relationships and supporting interracial daters.

“Today, there is barely any difference when it comes to the likes and preferences of black and white singles,” one article says. “The United States of America has grown into a multicultural society that attracts people from across the globe. People connect with each other, and there are sparks of admiration among each other.”

Many white men are drawn to black women in the dating world, but they don’t always have the opportunity to approach and woo these dark-skinned beauties — and that’s where online dating comes in. A niche dating site can broaden the horizons of white men and black women by introducing them to the kind of dates they may not encounter in their day-to-day lives.

WhiteMenBlackWomenDatingSite.com has combed through the online dating scene to deliver the best of the best in this niche and lead white men and black women to the romance of their dreams. Thanks to its insights and recommendations, many singles have chosen a legit dating site and embarked on an interracial relationship.

“With the freedom to make a choice, many interracial dating sites have come up to bring together lovers,” in the words of WhiteMenBlackWomenDatingSite.com. “The idea was to end racism as well as bring right-minded singles together.”