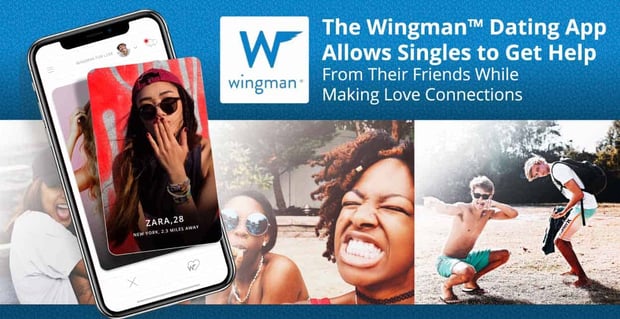 The Short Version: It can be helpful to have someone by your side when you’re trying to meet “The One,” and that’s the idea behind Wingman — a dating app that allows friends and family members to speak up for singles and suggest compatible matches. On Wingman, the people in your life act as virtual wingmen, and if they see another user who could be a fit, they can initiate contact. The process takes the pressure off meeting people and makes connecting more fun.

There’s something so simple — but also so effective — about a wingman. For guys, it may mean a friend who’s willing to let you assume the role of the attractive alpha male. For women, it may be someone who turns down ineligible suitors, allowing only vetted candidates to strike up a conversation with you.

When you think about a wingman, chances are the setting is a bar or a nightclub where plenty of singles are mingling. In these environments, your friends may even approach potential matches to see if they’re interested in you, and, if they’re not, there’s no embarrassment on your end.

Now, those friends can also help you make connections online through the Wingman app, available in the U.S. and the U.K. Through Wingman, friends can brag about singles in their profiles, as well as pick people who they think would be a perfect match. Users get to choose their wingman, and they’re the ones who make the connections.

“You are handing over the power to people you trust. And, as a single person, you can still browse through profiles around you. You may not introduce yourself to that person, but your friends can,” said Wingman Founder Tina Wilson.

Studies show that a wingman can make a big difference, and singles tend to look better when they’re with friends because it shows they have meaningful personal relationships. It can also make it much easier to be authentic.

The wingman also benefits from this setup. In addition to contributing to their friend’s happiness, there could be best man or maid of honor potential if things work out.

“People who are on the outside — who may not be single — don’t tend to overthink it. They may see something that we miss as singles,” Tina told us. “When they send their friend’s profile to a person, if they say ‘yes,’ then it’s a match. But if they say ‘No,’ you’d never know.”

Online Dating Can Be Easier When Friends Have Your Back

The origins of the app date back to when Tina was living in New York and working in interior design, and suddenly became single. All of her friends either had partners or were actively dating online, so she joined the online daters. It didn’t take long before she realized there had to be a better way.

“I was frustrated and a little unfulfilled, so I started thinking: ‘What would be a great experience for me?’ That’s what spawned the idea for Wingman,” she said.

Tina Wilson’s experience with dating in New York City led her to develop the Wingman app.

While Wingman’s main demographic is mostly between the ages of 20 and 35, the platform includes profiles for people as young as 18 and as old as 75.

“We have grandmothers who are helping their grandsons. When someone sees him and connects with him, it’s a bonus that his grandmother has written something on his profile because people often think it’s cute,” Tina said. “And she gets to stay involved in his life even though he’s far away.”

The team behind the app is also quite diverse. Its members span all age ranges, ethnicities, and sexual orientations, mirroring Wingman’s membership base.

“What brings us all together is our passion for wanting to do something great and help people,” Tina said. “These people are on the team because, at some point in their lives, they needed someone to help encourage them. And everyone is particularly rewarded in seeing that support come to life on a platform.”

A Simple Signup Process for Both Singles and Wingmen

Signing up for Wingman is easy and is even better to do when you’re hanging out with a group of friends. The singles who sign up for the app — available on iOS and Android — get to select their wingman. Next, friends verify their wingman status and write a profile for the single person.

“If you’re single, you choose your wingman — a friend, family member, or whoever you feel comfortable inviting. And that person writes a profile and answers a few questions about you,” Tina said.

Once users approve their profiles, their friends can introduce them to anyone who might be a good match.

If that person likes their friend back, the two can start communicating — and dating. But singles don’t know if potential matches decline, which saves embarrassment and feelings of rejection.

Wingman allows your friends to write your profile and approach singles on your behalf.

“We had a girl who recently just signed up her mother, and she wrote her mom’s profile,” Tina said. “It can be really frustrating to not getting matches. It can feel demoralizing. But having friends getting your back feels good.”

Tina said that a supportive community feeling was important to her when she first got back into the dating world.

“We’ve created something where friends can support each other in a collaborative way, and I had that,” she said. “My friends did that for me, and I know that it helped. You get to bypass some of the frustration and rejection, and it’s just a win for everyone.”

A wingman can help daters feel more comfortable and confident while also enhancing their odds of finding a potential partner. The Wingman app expands those capabilities to online dating, and the team plans expansion into countries beyond the U.S. and the U.K., including Canada.

“British daters can be pretty sarcastic, so they’ll say things about their friends in a cheeky way,” she told us. “And seeing that banter gives you insight into who they are. They’ll sometimes throw in some loveable flaws, and that’s how you can see who that person is. The ones I like most are the ones with humor.”

For those who need advice about online dating or how to be a great wingman, there’s Wingman Weekly, an informative blog filled with articles about today’s dating scene.

Tina said that, as the platform expands, she wants to add more success stories of love found with the help of Wingman. “We’ve seen users have babies and get married, and I’d love to see more of those,” she told us.