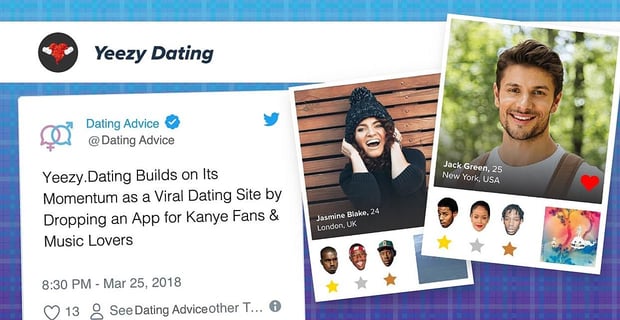 Yeezy.Dating Builds on Its Momentum as a Viral Dating Site by Dropping an App for Kanye Fans & Music Lovers

The Short Version: Yeezy.Dating is an independent dating site designed to court controversy and inspire romance. Since its launch in April 2018, the site has attracted thousands of Kanye West fans the world over, and now the brand has expanded its reach into the mobile space with a new app called Bound2. Billed as “the dating app for hip-hop fans,” Bound2 will bring fun-loving singles together through a shared taste in music.

In early 2018, Yeezy.Dating announced its imminent launch on the web to much fanfare. Its controversial branding as the first dating site for Kanye West fans created a stir on social media and in the blogosphere.

Entrepreneur and web developer Harry Dry originally came up with the idea while browsing the web in his bedroom, and he spent months building a cool dating site to match his vision. By April, he was ready to unveil Yeezy.Dating to the world.

Within 24 hours, over 2,500 people had created profiles on Yeezy.Dating, and several major media outlets, including The Guardian and Fox News, had covered the sensational story. Just like that, Harry could check “Go viral” off his checklist.

He didn’t let this early success go to his head, though. “There’s loads of flashy stuff you can do, which makes you look good, but don’t confuse that flashy stuff for progress,” he wrote on his blog. “That stuff is here today gone tomorrow. What gets results is being relentless and beavering on. It’s easy to be motivated when half the world’s watching. We kept going when no one cared anymore.”

In 2018, Yeezy.Dating created a buzz by offering Kanye West fans a dating site to call their own.

Once the media circus moved on and signups abated, Harry kept dreaming up ways to bring people to Yeezy.Dating and create a dating community like no other. His biggest and most ambitious dream was to get Kanye himself to talk about the dating site named after him. Harry came up with a bold plan of action to get the word out by putting up billboards in London, New York City, Wyoming, and Calabasas (all places where Yeezy has offices). “Hire Me, Mr. West,” the eye-catching billboards read. “I’ve got ideas.”

Harry put his phone number into the universe, but so far Kanye hasn’t called. Still, that out-of-the-box thinking and creative energy has led from one project to the next, and each has been a learning experience for the young site-builder.

In the last few months, Harry’s determined work ethic have transformed the Yeezy dating site into a hip-hop dating app, which offers even greater value to music lovers seeking a harmonious partnership.

“I think it works. I really do,” Harry said. “It makes a lot of sense to match Kanye fans with one another because Kanye isn’t just a musician. If you stand for Kanye, you stand for yourself.”

Singles Take a Chance on a Small Yet Hardcore Community

One thing’s for sure, Yeezy.Dating users have a healthy sense of humor. You’ll stumble upon many idiosyncratic personalities as you scroll through profiles. These singles use sarcasm, music lyrics, memes, and all sorts of other original content to catch people’s eye. Looking for a date is a laugh-out-loud experience in this community.

“Because it’s such a weird product, weird stuff happens. It’s a culture,” Harry said. “In a way, being a Kanye West fan is a little bit of a lifestyle. As he says, ‘You’re not a fan of Kanye West; you’re a fan of yourself.'”

Kanye fans have largely embraced Yeezy.Dating and built an enthusiastic community around it.

Unsurprisingly, the Kanye-inspired dating site has attracted significantly more men than women, but around 20% of members identify men seeking men, so the male-dominated culture isn’t bad news for everybody.

In terms of location, Yeezy.Dating users are all over the map, but city-dwellers outnumber small-towners. Users in big cities (London, New York, Berlin, Melbourne, etc.) will have the best luck finding multiple date prospects online, while suburban singles generally have to commit to drive or fly somewhere if they want to meet in person.

Harry said he has heard of users flying to other states or countries to meet one another, but he has also noticed that some users are content to chat online without meeting. As the dating network grows, he expects more people will have the opportunity to go on IRL dates and turn online friendships into full-blown relationships with extraordinary individuals.

“Kanye West fans have that mentality to just go for it, take a risk, and don’t be afraid of being a bright color,” Harry said. “Kanye fans share the zest for taking a chance and thinking that your dreams can come true.”

Harry originally launched Yeezy.Dating as a one-man show. He did the coding, marketing, and management himself, and it was exhausting. Some altruistic coders and his business-savvy father gave him a helping hand here and there, but he needed more than a part-time boost — he needed a partner to grow the brand.

So, Harry sold half of the Yeezy.Dating brand to Ourselves (a Venture Studio based in London), which brought an in-house team of designers, engineers, and strategists to the table. “As a backer, they’ve shown me lots of love — and lots of tolerance,” Harry said. This partnership has led to the overall improvement of the dating site, which has now relaunched as a dating app.

Bound2 turned heads when it launched in December 2018, and it currently boasts a 5-star rating on the App Store. The name Bound2 comes from Kanye’s song “Bound 2 Falling in Love,” which is obviously the app’s primary aim.

Ourselves worked hard with Harry to build a dating app Yeezy fans could be proud of using, but they also wanted to broaden the brand beyond Kanye West and reach out to all hip-hop fans.

Bound2 has taken the core idea of bringing music lovers together and made it more practical, convenient, and forward-thinking. The app boasts the same music-centric features Yeezy.Dating users know and love, so you’ll still be able to list your top three favorite artists and songs on your profile. But it also offers new ways to connect with people. The Ye Button is an innovative feature that will generate music lyrics or a Kanye quote to send as a conversation starter to your crush.

“It’s probably our most novel feature,” Harry said. “It gives you a starting place to spark conversation and share a laugh.”

Living Up to a Legacy of Genius & Controversy

Yeezy.Dating started as a thought experiment, and it became an international sensation in less than a year. The site and app have facilitated countless conversations, and Harry has already heard back from users who said they found a relationship on his platform.

One single man in the Midwest joined Yeezy.Dating last year and was disappointed that only one woman in his area had a profile. Luckily, it was an active profile, and she returned his heart and replied to his messages. Their friendly online correspondence led to a romantic relationship, and the man wrote to Harry to say he was already envisioning a future with this special lady who turned out to be the only one for him.

That sort of love story is mind-blowing to Harry, who remembers when Yeezy.Dating was just a chaotic collection of post-its on his wall.

“You completely forget the site’s impact because you’re so focused on the product and metrics,” he said. “So, whenever I get an email from somebody, maybe three or four times a week, saying that they’ve met someone, it does really touch me.”

Harry built Yeezy.Dating as a gift for Kanye fans, but he has also benefited from the dating network. He said he’s gone on many dates with people he met on the app (even traveling to Berlin to meet someone in December), and he found the quality of dates improved because they shared a common sense of humor and style.

Not all Yeezy.Dating’s success stories involved romance. Some weren’t even intentional. Before his dating site went live, Harry established a group chat for hardcore Kanye fans so he could send mass updates on his progress. The people in the group ended up forming friendships that went beyond the app. Almost a year later, the group still uses the chat to keep in touch with one another and discuss Kanye-related news.

“I’ve seen people in that app grow from being incredibly lonely,” Harry said. “Now they’re meeting people from the community and going on dates from the app. I’d like to think the app has played a small role in changing people’s lives.”

From the beginning, Harry’s business plan has been pretty simple: Grab people’s attention, and don’t play it safe. He started out using Kanye’s polarizing brand to create a buzz around Yeezy.Dating, but now this entrepreneurial site owner is just doing him and making it work.

Yeezy.Dating had its time in the sun as a flashy new idea, and now the Bound2 app is reaching for the mic to build on that success. This fast-growing app has broadened Yeezy.Dating’s appeal by including all hip-hop fans in its dating network. As far as the future is concerned, users can expect more updates, more features, and more fun to come.

Harry said his main goal is to grow the online community as much as possible — but he still wouldn’t say no to an endorsement from Kanye himself. The sky’s the limit for this hustling hip-hop-inspired dating app, and we can’t wait to see where it goes.

“Hopefully, in time we’ll hit the black swan or the freak opportunity where we do get a chance to meet with Kanye and get him to back the app,” Harry said. “I think our job, for now, is just growing the user base so when the opportunity comes, we’re ready for it.”