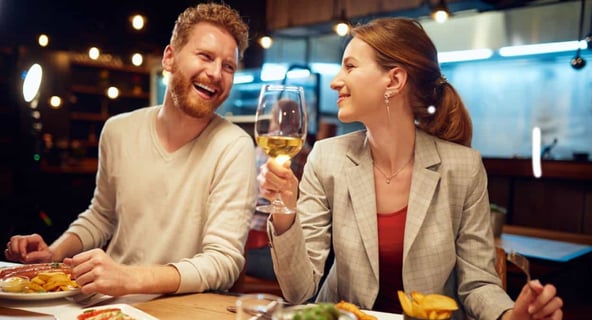 Drinking on a first date is an activity many people often take pleasure in, and new research reveals who’s indulging and who’s refraining.
DatingAdvice.com’s latest study found 72 percent of Americans think it’s OK to drink on a first date.
Men were only slightly more likely than women to do so – 72 percent versus 71 percent, respectively.
The results also show older Americans are among the most comfortable with participating. Among those aged 65 and older, three out of four said it’s acceptable to have a drink or two on a first date, while only three out of five 18- to 24-year-olds agreed.

“Older Americans are the most
comfortable with participating.”

Singles and Southerners were some of the least likely groups to approve of first date drinks.

Married and divorced respondents were 7 percent more likely to drink on a first romantic outing than singles, and Southerners had a 13 percent lower likelihood of drinking on a first date than Northerners.

The Breakdown: Americans Who Think It’s OK to Drink On a First Date