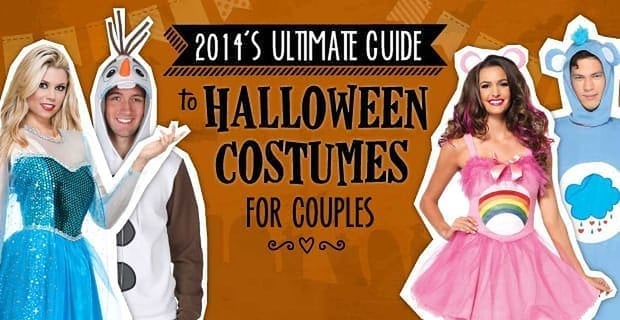 Halloween used to just be a day for kids to go trick or treating, but not anymore!

Adults have claimed this one night a year as their opportunity to be anything they want to be. Whether they choose to become a movie character or a pop culture icon, this is their chance to shine as someone new.

When you’re a couple, this can be trickier. After all, you have to come up with two awesome costumes, and you generally want them to go well together. Add on the need to look cute/sexy/funny, and you’ve got a rather daunting task on your hands.

After talking to the experts in all things Halloween, we’ve compiled this list of the best couples costumes of 2014, making it easier than ever for you and your SO to pick your Halloween wear.

So if you’re still wondering what to dress as, there are some great options to choose from right here.

With all of the recent movies that have come out lately, as well as Batman’s 75th anniversary, dressing up as a superhero is not only all the rage, but it’s also a fun way to leave your “alter ego” behind for the evening.

Brand Manager for HalloweenCostumes.com, Aleksandra Sobic, suggested this fun idea. Since the new movie came out, many options have become available.

“There are so many ways you can do it and adapt it for your personal couples style,” she said.

Guardians of the Galaxy

Sobic, our superhero costume connoisseur, also pointed out a cute couples costume can involve characters from “Guardians of the Galaxy.” A woman could dress as Gamora or even a sexy Rocket Raccoon. To complement that, a man could dress as almost any other character (including Rocket, too).

According to Trisha Lombardo, the marketing coordinator for Spirit Halloween, Batman is always a popular choice, especially this anniversary year. There are options for men and women to be Batman or Robin, which is “a really fun spin on superheroes.”

If a lady prefers to dress as a lady, Poison Ivy also is a great option and is exclusive at Spirit this year!

BuySeasons Inc. Public Relations Manager, Holly Botsford, who helps run sites like BuyCostumes.com and CostumeExpress.com, doesn’t want you to feel limited to those options, though!

“Villains are really popular right now,” Botsford said. So you choose to go as your favorite hero and their corresponding villain!

She also suggested taking the same person and being the male and female versions of it. For example, you two could be Mr. and Mrs. Captain America.

Some of these looks might be tricky to capture, so Sobic recommends checking out YouTube and Pinterest tutorials to help make your superhero look super, super!

Bring your beau with you as you head back to a simpler time. There are so many different options to choose from, and people are sure to love the throwback – even if Halloween isn’t a Thursday this year.

You two can spend the night making your friends find you when you’re dressed as Waldo and Wenda. Everyone will have a laugh, and you’ll have an easy time getting away if you decide to call it a night!

Sobic assured us year after year, there are many couples who want to dress up as one of these prehistoric couples, and we know we can trust her expertise. You two can definitely (Bed)rock these costumes.

Cat in the Hat

Swap out the green eggs and ham for some candy and you’ll be in business. There are a lot of different ways to do these nostalgic characters that will be fun and cute.

A costume crackerjack, Lombardo suggests dressing as either The Cat himself or going out as Thing 1 and Thing 2.

The Wizard of Oz

With the 75th anniversary coming up, anyone will be able to appreciate a nod toward this classic.

Botsford said, “Women can go as Dorothy, with the guy dressing as Scarecrow or Tin Man.” Talk about a cute idea!

If you want a different spin, the woman can always dress as the Wicked Witch of the West, while the man becomes a flying monkey.

One of the most popular choices for couples every year is to dress as Danny and Sandy. If the leather pants don’t scare you off, then this iconic couple costume could be “the one that [you] want.”

Hershey’s Associate Manager of Brand Public Relations, Brandy Woolford, said not only is dressing up as a famous candy bar a clever idea, but it’s also adorably sweet.

For couples who love treats (as well as a good pun!), a fun idea Woolford recommends is pairing a milk chocolate bar costume with a Mr. Goodbar costume.

For the musically-inclined couple, why not go as each half of a Kit Kat bar and sing the jingle the whole night?

“Candy costumes are a creative spin on a day that is full of treats,” Woolford said. “By tying into this theme, a couple is able to break out of what is expected while being cleverly delicious.”

If it’s trending, it’s a trendy costume. Whether that means you’re a celebrity power couple or the latest Facebook fad, you two will love the recognition you get.

This is the night you want to have all eyes on you, and these costumes will put them there.

Even if you didn’t see the movie, this costume is still a blast. Sobic, who shared this clever costume idea, suggests you can both dress as a sharknado or have the guy become a tornado and the girl dress as a sexy shark.

Lombardo thinks this is a great idea because you have so many options to work with, and she makes an excellent point. You could go as Khal Drogo and Khaleesi or Jon Snow and Ygritte.

These are in-depth costumes that require more pieces, but fortunately Spirit has “everything to complete the look for ‘Game of Thrones.'”

With the popularity of this challenge, a cute couples costume is for the guy to be a bucket and the girl to be sexy ice.

Not only will you raise awareness for ALS, but you have the opportunity to give people challenges all night long.

Another very popular TV show, there are plenty of characters you two could be. Rick, Michonne, the little girl in bunny slippers… You’ve got a lot to work with when you think of just how many characters there are.

You also could do a spin on being the same character – who wouldn’t love a male and female Daryl?

Once Upon A Time

Incorporate fairy tales with pop culture by dressing as the characters on this popular show. As an expert on good couples costume ideas, Botsford suggested using “Once Upon a Time” as inspiration because there are so many couples to choose from, and they’re all very recognizable.

This is your opportunity to have a Halloween that ends happily ever after.

While most women love dressing up like animals, guys might not be as thrilled with the prospect. Fortunately there are lot of costume choices where a furry friend is accompanied by a human companion, adapted to “make them something both partners want to do,” said Sobic.

Take the opportunity to put on your animal ears and paint the jungle red.

Show who wears the pants in the relationship by the person actually wearing pants – then show who can take off that pants-wearer’s head if she wanted.

This is a cute costume idea that’s pretty easy to put together.

The lady can be a sexy bull, showing off her ferocity, while the man can dress as a matador.

Sobic suggested this costume as one that’s a little different for couples to do but still a lot of fun to wear. She’s got the right idea. Olé!

If a guy is willing to dress up as a critter after all, being The Wolf and Red Riding Hood can make for a fun costume. Just don’t let him get his hands on her basket!

Botsford, ever coming up with other options, also suggested going as the same animal or a “pair that corresponds.” You could be a cat and dog, fox and hound or “Lady and the Tramp.”

And don’t forget about all of those other human/animal pairings like the example below!

Take it from our experts – the choice is yours!

Ultimately, “No matter what you choose to go as, you want to bond as a couple and make it your own,” Sobic said.

This can be done by using your own makeup and jazzing it up with accessories. The important part is “you [two] are on the same page.”

Lombardo also wanted to make it clear that you aren’t limited to traditional couples costumes. There are ways to transform any idea into a costume or variation, “so every couple can make it work for them.”

Botsford added, “The main thing is to own it and do something that suits your style. You can stretch your creativity. Halloween is an ‘anything goes’ holiday and is special for couples.”

She also informed us that couples costumes can really bring you two together as a united front.

“It’s really a three-step process. You’re planning, you’re getting ready and you’re going out, and you’re doing it together versus doing it in separate worlds,” she said. “It’s a way to really cement your relationship.”