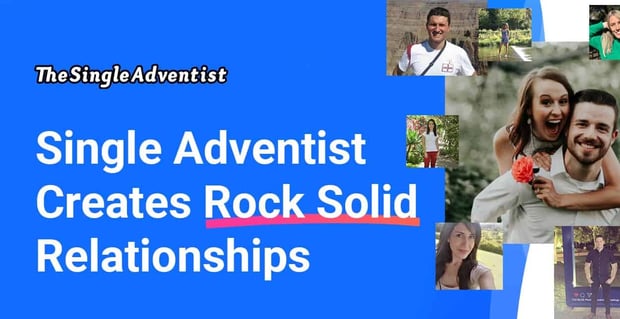 The Short Version: For some singles, religion is a major factor when dating. Having a partner who shares the same faith as you can be rewarding in more ways than one. But going to church to find a date isn’t always feasible, especially with COVID still roaming around. Thanks to tech entrepreneur Edward Pileggi, the dating app The Single Adventist was created to help Adventist faith-based singles find love online. Single Adventist members on the app don’t have to worry about figuring out the dating scene alone. The Single Adventist provides a safe environment with the proper tools for singles who want to find someone they can share and expand their faith with.

Some daters already have in mind what they want out of a partnership. Culture, hobbies, and religion are some of the key factors that singles take into account when looking for a partner. Thanks to the advancement of technology, online dating sites are becoming more niche friendly. Singles can find a dating site that caters specifically to their needs and desires.

After earning a bachelor’s degree in Community Science from an Adventist university, Edward realized that he was equipped to help the Adventist community. With limited dating sites available for Adventist singles, Edward wanted to make a difference in the dating lives of Adventist singles. He noticed that those singles who had difficulty in finding compatible matches in the church would eventually turn to marry people outside of their faith.

To help people remain equally yoked and fruitful in their relationships, The Single Adventist sets singles up for success through features and thoughtful matches. Many members of the app give thanks to the team for paving the way for them to find a rock-solid relationship they never imagined having.

“Thank you guys for the wonderful experience and for allowing us to connect on your site. We are forever grateful and highly recommend it,” said Single Adventist couple, Megan and Tim in a testimonial.

It’s safe to say that online dating isn’t the traditional method of meeting Christian people. But that doesn’t mean you can’t find a relationship organically online. According to Proverbs 18:22 in the New Kings James Version of the Bible, “He who finds a wife finds a good thing, And obtains favor from the LORD.” In translation, finding the love of your life is worth the wait and investment.

When using dating sites, remember that there are people who share the same desire to be loved and give love just like you do. It’s just a matter of time and exploring your options until you finally are led to the one.

The Single Adventist team understands this and is dedicated to helping singles build Christ-centered relationships authentically. The team understands that, when people meet organically, it can create a more positive outcome in their relationship. It’s not a race to match singles on the app; instead, the team undergoes a thorough process to identify similar qualities members share that bring them together.

The Single Adventist uses a compatibility matching system to create compatible matches that often lead to long-lasting relationships. But the team encourages members to build organic relationships with one another through real-life experiences. They recommend members go beyond getting to know each other outside of the app.

“It is vital to date and get to know each other in a deep, revealing, and meaningful way by sharing a broad base of experiences together. The more experiences you share, the better your chances of avoiding hidden and sometimes unpleasant surprises,” advised The Single Adventist team.

Using Bible Verses to Encourage Members Throughout the Way

When singles feel hopeless and unproductive in their dating lives, they can turn to The Single Adventist for a reminder that they are more than capable of reaching their happy ending. According to The Single Adventist team, there are thousands of people of all ages, ethnicities, and national origins who use the app to find genuine connections. That is thousands of members to meet and potentially connect on a spiritual and emotional level.

“I can’t even keep up with the number of relationships and marriages that have formed on the site,” Edward said. “That’s what drives me.”

But how does The Single Adventist team support and motivate every single member on the app? Simply through words of encouragement. The Single Adventist shares daily verses for members to read to stay reminded of what God has in store for them. Members can utilize the daily verses for devotion, prayer, and meditation. Shared Bible verses,  such as Habakkuk 3:19, “The Sovereign Lord is my strength; he makes my feet like the feet of a deer, he enables me to go on the heights,” encourages singles to find strength in God throughout the process.

“I met my boyfriend on this site, today we are engaged and as soon as possible we’ll get married. Pray and wait on Jesus you will find someone,” said a Single Adventist couple, Elisa and Mark in a testimonial.

Over the years, Edward has launched multiple dating sites to serve the Adventist community. Equally Yoked is a sister site to The Single Adventist, and they share the same network to increase the likelihood of a new member finding a compatible partner.

By making compatible matches and introductions, The Single Adventist continues to pave the way for Adventist singles from all around the world to find true love. The Single Adventist is available in English-speaking countries: the United States, Canada, Australia, New Zealand, and the United Kingdom. Members must be 18 years old or older with a clear criminal history to use the site.

“We remain committed to investigating and understanding what makes Christ-centered relationships successful by conducting ongoing, rigorous research to keep the matching algorithm up-to-date and relevant for domestic and international markets,” said The Single Adventist team.

Edward told us that the team has done extensive updates to the platform to create a safer and more enjoyable experience for members. The Single Adventist works vigorously to keep the site a safe place to date. A screening process can identify any individuals who may be misrepresenting who they are. Member complaints are taken seriously and should be reported immediately.

The Single Adventist team encourages members to not rely solely on their screening process and to always look at the suggested safety tips provided on the site.
“I found the most incredible man that loves God and wants to treat me as his princess. I’m excited about the future and we both want to live an obedient life praying for one another. Our goal is eternity and balancing one another out, I want to hold his hand entering heaven,” said Brenda, a Single Adventist member in a review.