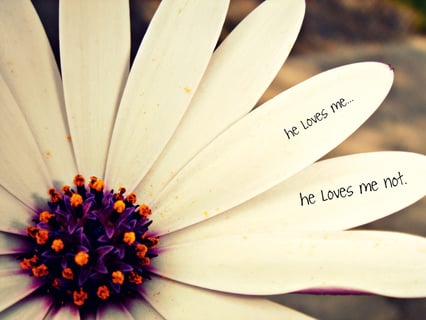 One of the secrets to finding the right man is not being emotionally involved with the wrong man. You have a finite amount of time on this planet, so you want to be wise in how you spend your life energy.

Unfortunately you can’t always rely on initial spark or intense attraction to indicate a good match, particularly with online dating. In fact, passion and chemistry can sometimes cloud your better judgment.

It can take years or even decades to rebound from what initially appears to be a seemingly insignificant relationship detour gone awry. Yet it also can be very confusing, particularly in the early stages of dating, to know what to look for.

How do you know if he might be the wrong man? How can you avoid wasting your precious time and bypassing other opportunities?

While it’s impossible to mention every warning sign, here are few common red flags to watch out for as you’re getting to know a man:

1. He is rude, angry or abusive

Keep your radar finely tuned for signs of this kind of behavior.

Usually men are at their best in the early stages of dating, so beware if he is rude to service people, insults you, shows signs of uncontrolled anger or tries to control you. All of these can be potential precursors to abuse.

2. He is rushing the relationship

While it can be flattering to be swept off your feet, it also can be an indication of something to hide or an unmet need.

He may want to hurry into your life, head, heart or bed before you even realize what has happened.

Take time to catch your breath so you don’t find yourself wondering how you ended up prematurely entangled.

3. His words and actions don’t match up

Take notice if he lies to you about little things, as he may also be willing to lie about more significant things. Watch for patterns of behavior, not just isolated incidents.

If he is says one thing and does another, believe his actions over his words.

Some men are smooth operators and know exactly what you want to hear. If he doesn’t follow through or keep his promises, you will likely be frequently disappointed.

4. He asks you for money

If a man is seeking money or financial support in the early stages of dating, he may have significant issues with his finances or a pattern of chronic unemployment. Even worse, he may be out to defraud you.

Many sympathetic women have fallen for a sad sob story and have been taken advantage of. Don’t be one of them.

A real man with his pride intact would rather clean every toilet in Grand Central Station with a toothbrush than ask for money from a woman he barely knows. You may end up feeling used, and ironically he may end up resenting you if you shell out your hard-earned cash.

5. He makes bitter or misogynistic comments

A man who makes ugly and derogatory comments about his ex, talks about women in explicit sexual terms or calls any woman an obscene name needs to clean up his vocabulary and add some class to his act.

It is almost certain he will eventually direct this conduct toward you.

6. He doesn’t respect your boundaries

A man who is dealing with you in good faith will be concerned for your comfort, happiness and safety. He will want to please you, accommodate your requests and be willing to earn your trust.

If he frequently pushes you to do or say things you are not comfortable with, makes unreasonable demands or does things he knows will hurt or disappoint you, he may be a narcissist.

7. He is unwilling to define the relationship

When you have been dating a man for a while, it’s natural to want some clarity about the general direction of the relationship. While it may feel risky, it’s ultimately better to know the truth.

Particularly if you are planning to sleep with him, you deserve to know if the relationship is exclusive, if either of you are still dating other people and what you both hope for in the future.

While this is no guarantee everything will go as planned, it can help prevent hurt feelings, unrealistic expectations and painful misunderstandings. A man who really cares for you will have the courage to share his thoughts, tell you the truth and let you know if his intentions change.

It’s essential to get to know the character of a man before you give your whole heart to him. Approach a new relationship from a place of curiosity and observation.

You have not only the right but the responsibility to look after yourself and to make those decisions that bring you happiness and peace.

While it may be tempting to ignore the warning bells or uneasy feelings inside, you will likely live to regret it if you do. Pay attention to your inner guide and trust your instincts.

After a failed or abusive relationship, many women look back in retrospect and say “The signs were there all along, but I chose to ignore them.” It’s much easier to avoid this kind of regret and to save yourself from excruciating heartache if you begin any new dating relationship with your eyes wide open.

You will be much wiser in matters of the heart if you stay grounded in the reality of what is (rather than getting caught up in the fantasy of what you wish or hope it could be).