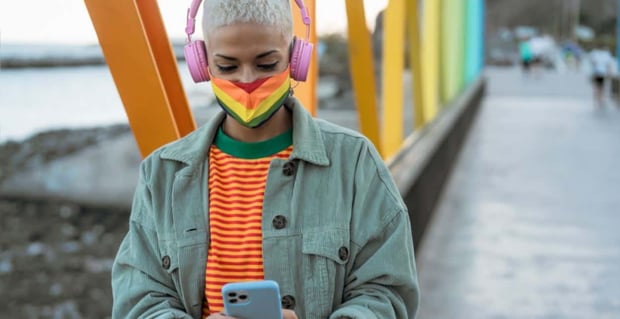 Cliches are ideas that have gone around for so long that you start thinking they are true. When it comes to lesbian life, the straight world has quite a few cliches that just don’t match real life.

I’m still amazed at the ones I consistently hear, and it’s time to help you crack open your brain and see lesbians in a new light.
So for your entertainment, here are eight commonly held lesbian cliches that are just so not true!

8. Who’s the guy in a lesbian relationship?

Ask any lesbian couple and they’ll tell you NO ONE IS THE GUY. That’s the point. There is no guy in a lesbian relationship.

There may be a woman who has more masculine energy, but she’ll tell you she’s all woman when it comes to love, sex and her relationship.

There’s a big fantasy life going on in the media about straight couples hooking up with lesbians because both think it would be hot. The problem is your lesbian friend doesn’t think it’s hot at all. You really are making her “that’s gross” meter freak out.

7. Can lesbians have real sex?

This is another interesting and silly question.

Is your imagination that bad? Do you live and die by the missionary position? Haven’t you ever touched your girlfriend down there or gone down on her? God, I hope so for her sake!

It’s only limited by a lesbian’s imagination, and in my experience, lesbians have amazing sexual imaginations.

The really big plus of lesbian sex is surveys show it lasts a lot longer than sex with a guy. Lesbians have longer and more passionate sex along with longer and better orgasms.

Ah, the magic penis theory. The power of a penis is enough to make any woman only want more and more of it. Too bad it’s not true.

Well, lesbians know this, too. We love this about women. No bristle face. No short shooter sex. None of that overgrown body hair to deal with. Yes, women are soft, sensuous and sweet.

Now I don’t have any numbers on this, but at least half the lesbians I meet have been with a guy at least once. It only convinced them never to do it again. Enough said.

5. Are you lesbian because you were abused as a kid?

Here’s what research tells us

. Every three out of five women has been sexually abused as a child. If abuse makes you a lesbian, we would be the majority of the female population in the world, and unfortunately we know that’s not true.

4. Do you just wear each other’s clothes?

Is this a fantasy about underwear? Most lesbian couples aren’t the same size to begin with, so this won’t work. Then many couples actually have different preferences in clothing choices.

Ultimately if we wanted to share clothes, we could. And why not? It’s not like a cross-dressing husband who sneaks off with his wife’s sexy lingerie or undies. We already wear women’s undies. We don’t need to sneak around about what we wear.

No, we don’t get special rates. We also don’t always U-Haul. Sometimes we use Penske.

It’s a great story, though, and some women do get attached to each other far too quickly and do the U-Haul thing. I’ve seen it happen. It’s typically not a good thing, but it’s one cliche that unfortunately holds some truth to it.

2. What about lesbian bed death?

What about lesbian bed death? It happens, but it’s no more prevalent than heterosexual bed death. That happens, too, and more frequently because there are just more straight people in the world.

1. Aren’t you too pretty to be a lesbian?

This one is so damn funny, right? A great response could be, “Well we know you’re straight and dumb because you’re so ugly!”

The largest part of women in the lesbian world don’t relate to looks the way the straight world does, and it shows in how we dress, cut our hair and live our lives.

Feminine and pretty lesbians are all over the place. The straight world fantasy is all lesbians are fat and look like men. That’s just so wrong. Look at Ellen and Portia. They are both gorgeous women!

The hard thing about this comment is many very pretty and feminine lesbians have a hard time being accepted into the lesbian community.

Yeah, we sometimes kick our own girls in the knees, but when it comes to being lesbian, every kind of woman is welcome!

Get your freak on because in lesbian land, you can break all of the cultural rules for how you dress, live your life and show up in the world. We call that freedom and we love it.

Think outside of the box

Well, lesbians are a wild bunch. We come in all sizes, packages and with all kinds of ideas about what makes us lesbian, queer or gay. We like choosing our own labels for ourselves and don’t really pay much attention to those silly stereotypes the straight, homophobic world likes to use.

So there you go. Eight more boxes crushed! Your brain is now free to roam and learn new things.

With these eight cliches now addressed, what else is on your mind about lesbians, lesbian culture and the boxes you think we live in?

2 Ways to Kiss a Lesbian and Turn Her On