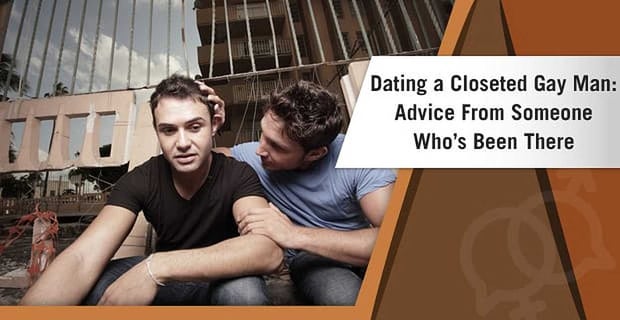 Perplexing dilemmas abound when you’re single in the gay dating market, and perhaps one of the most common head-scratchers is when you, as an out gay man, meet and are immediately attracted to a man whom you discover is in the closet.

Do these relationships work? Should you invest your heart and energy into building a romance and potential partnership? In a dating world where it can seem impossible to find a compatible match, should you be picky in this particular regard?

Read on and reach your own conclusions as you evaluate the pros and cons of this prickly predicament.

First, Know There Are Stages for Figuring Out Our Sexual Identity

As gay men, we all go through predictable stages as we come out — first to ourselves and then perhaps to others. This is a developmental process with various psychological factors and milestones that occur through as we try to make sense of our sexual identity.

The most popular model depicting these stages was developed by Vivienne Cass and is called the Cass Model of Sexual Orientation Identity Formation. Every man you meet will fall somewhere on this spectrum of the coming-out process, and it will be important for you to assess this dimension to ensure his level of development and self-acceptance matches your needs for a partner. You, as an out man, will likely be positioned in Stages 5 or 6.

If You’re Attracted to Someone Who Isn’t Out, Pump the Brakes

So what do you do when that hottie across from you at the café announces that he’s not out after you’ve already created a barrage of fantasies in your mind of how perfect the two of you could be as life mates? Definitely put on the brakes. This is one dilemma that requires serious contemplation.

In my experience as a therapist and coach, couples of similar outness levels tend to have the best relationship outcomes and prognosis. In other words, two out men and two closeted men fare better with relationship success than those on opposite ends of the coming-out continuum.

Of course, there are always exceptions. There are those out/closeted couples who can function well despite the inherent challenges and complications, but those tend to be predominantly in the minority. The reason for this lies in the stresses that inevitably become activated when the opposing needs and boundaries of each man conflict.

When you meet someone who’s in the closet and you’re not, give yourself time to determine if this is the kind of relationship you want to enter into.

For the closeted man, the pressures he begins to feel about being more visible with his relationship status and sexual preference before he’s emotionally ready can grow to resistant proportions and cause both personal and relationship strain with his partner.

Conversely, the out partner often ends up feeling like he’s been thrust back into the closet because he becomes restricted in his ability to live his life freely and authentically due to not wanting or being able to expose his relationship status with his closeted partner in various social contexts.

As a personal example, I experienced this very dichotomy in a prior relationship as compared to my present union. I was in a long-term relationship with someone for many years who was out to family and some personal friends but not out at work or with other social relationships.

I lived for a long time in the shadow of not being known because of my restricted access to important dimensions of my partner’s life. It contributed to my feeling invisible — like a part of me and our relationship was diminished in his eyes.

The most jarring and hurtful moment was when we were shopping at a grocery store one day. As we were standing in the line for self-serve checkout, both of us with items in our hands, a man and his wife approached my partner and greeted him happily and with surprise at running into him. This man, I later found out, was my partner’s co-worker, and, in that moment of panic, my partner quickly stepped in front of me to block my presence from view and nervously chatted it up with them.

It was at that moment that a flood of memories of other times I’d been dismissed as his partner all those years we’d been together came to mind that I’d brushed off or minimized. It was quite an epiphany. I didn’t want to be a dirty little secret anymore, and that’s what it felt like I’d been relegated to. And it hurt.

As a contrast, my current (and last!) relationship is out in all capacities. From the moment I met Loren, he has proudly showcased me as his boyfriend and soul mate to everyone in every part of his life.

He has made me feel special and cherished, and, instead of feeling like a dirty little secret, he’s made me feel like a celebrity — as everyone in the small town he’d resided would recognize and greet me with affection in a way I’d never experienced before.

I’d never really realized before how I was still actually partially in the closet being in the previous relationship despite my belief that I was an out man. Because of Loren’s personal evolution and relationship mindset, I no longer felt hidden in this new partnership, and it led to a whole new worldview and sense of empowerment I’d never experienced before.

For the first time in my life, I now know what it feels like to be in a transparent and authentic relationship, and I couldn’t be happier — so much so that we are getting married in less than two months!

These Relationships Can Work, But Remember to Do What’s Best for Your Life & Happiness

Deciding whether to date and develop a relationship with someone who is still in the early stages of coming out and is inhibited about his sexual identity (when you yourself are out and proud) is a personal choice only you can make.

Closeted men can make great boyfriends because they oftentimes have a newfound excitement and enthusiasm about love, being so new to gay culture. They are less jaded by gay dating due to their lack of experience and exposure, and they can be good with boundaries and pacing a relationship to allow it to form organically.

Conversely, these relationships require significant compromise, sacrifice, flexibility, and inhibition on the part of the more out partner at a juncture in their lives where they’ve spent great energy growing out of the closet with their identity development.

You will have to decide for yourself if dating a closeted man would be considered a dating trap. It’s recommended that you temper your excitement with the chemistry you’re feeling for this new hottie and conduct a thorough cost/benefit analysis about the pros and cons of venturing into such a choice. Complete a personal inventory of your values and personal requirements for what you’re seeking in a partner and a relationship and determine if dating someone closeted is compatible with this vision for what you’re seeking.

Is Shyness Ruining Your Dating Life?