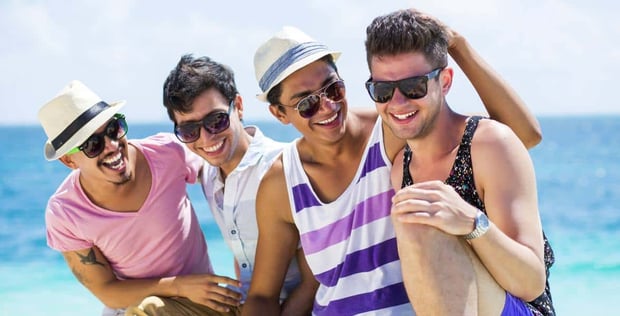 From Single to Mingle

A voyage of rediscovery – finding myself again after being in hiding for years.

After that, I spent the next 20 years in relationships, but then I found myself single and needing to meet people, with no idea how to go about it. I didn’t know what the modern rules of engagement were.

Common sense tells you not to go near friends or work colleagues, but outside of that, how does a woman in her 30s go about meeting new people when most of her friends are married with kids and don’t have loads of handsome single chaps to pair her off with?

I come from a strong line of women, and we have a motto, “Chin up, onward and upward.” It seemed it was time for me to prove I was deserving of my revered ancestors genes, pull my socks up, stop sniveling and get the hell on with life.

Where did I begin?

I headed online. I knew dating was going to be much easier for me than it would have been for previous generations of women. All I had to do was stick pictures and words online and wait for Mr. Right to send me a message.

I had an initial flurry of men sending me messages, as I was new to the site, and I generally found them creepy, intimidating or plain repulsive.

That said, I did get the occasional very amusing message which would make me smile. My favorite being one I received on a very hot summer day while waiting in line to order my morning cappuccino:

Two months later (in the same week but on different nights), I dated the first two men who had the balls to ask me out. With the benefit of hindsight, I do not advise this.

Look at the photos and profiles and make sure you’re likely to have a lot in common and some spark.

I found those first dates really hard because I had a number of fears, which I can see now all just reflect my insecurities.

The first of these was I would turn up and they’d be obviously disappointed.

I don’t think my profile photos on the dating sites are especially great ones of me. They are all recent and I have made sure there are a few full-body shots.

I do this purposely in the hope that when they meet me, they will be pleasantly surprised rather than wanting to bolt.

I have experienced this in reverse. One chap I met looked nothing like his photos and was actually physically repulsive to me. Only my good manners prevented me responding to my animal instinct, which was to run away.

In my dates so far, either they have not been disappointed or they have been well brought up enough to see the evening out and not leave me at the table wondering if they have escaped out of the toilet window!

One of my other fears is I will meet up with people and have nothing to say to them. Again, this comes down to my own insecurities and has proved to be unfounded.

Even on dates which I would not want to repeat, we have managed to find things to talk about. The reality is we all have a lot in common with our fellow human beings, so if you ask a few questions, you’ll always be able to find some common ground.

I’d advise finding common ground and comfortable conversations quite quickly on a date, as this helps you both relax and feel a little less nervous.

Further to that, I have decided anyone who claims they’re not nervous before a first date is either a liar or incapable of normal human emotion.

One of my other fears is I will meet a serial killer and end up dead. I know it sounds ridiculous, but it is true.

I would like to point out I have a few dates with complete strangers now, and whilst some of them have been a little eccentric or had their own little quirks, none have tried to kill me, which has been a massive relief!

However, there is a serious point to be made. The reality is you’re meeting a complete stranger on a first date, which does leave you vulnerable. You may have chatted for ages online, but that means nothing. You do not know them.

I allocate a chum each time I have a date, and they are on “murder watch” for the evening.

“Go with the flow

For a few months, I actually had very few dates.

I had the initial two, but as my ex was still living with me and I was very busy in work, I was not really putting much effort into the endeavor.

I was passively reading messages and waiting for men to contact me rather than proactively looking for anyone myself.

On the odd occasions I did spend time scanning the online dating sites, I would come across little gems like this, “Do you like being dominated?”

Initially I used to be shocked when I saw things like this or got messages that made my skin crawl.

However, I think a large part of this was because (even though I would not have admitted it to myself at the time) I was pretty prudish.

After 12 years in a relationship, it is easy to be a bit out of touch with the rest of the world, and the reality is the Internet provides an amazing opportunity for people to meet others with similar interests.

Just because I don’t want to be dominated does not mean the next woman he messaged won’t.

I was slowly beginning to learn to be a bit more relaxed and accept that we all like different things.

I remember a friend telling me she had much younger men approach her all the time, was sent very personal and revealing photos and was regularly invited to join threesomes.

She predicted that within a few weeks of being on the online dating sites, I would have had the same experiences.

I was so shocked that I nearly fell off my chair, and I recall being quite horrified and thinking how seedy this online dating world must be, whereas I think the reality was I was simply very judgmental.

Slowly things have got better.

I have learned a lot about myself and changed my outlook on dating.

I have joined new sites that quickly hook you up with potential matches and have had a number of dates with really lovely chaps.

Many of them have been younger, but I am perfectly happy with this and have no need to justify anything to myself. This comes from realizing that after 12 years, the last thing I needed was another serious relationship.

I used to get really excited every time I got a new message – could this be my next boyfriend, my future partner, the elusive Mr Right?

Next would come the disappointment when I read the message and realized it was just another unsuitable man who I had no interest in meeting.

Now I only reply to men I really want to meet up with, and I am using popular hookup sites for less serious casual dating.

I also realized I needed to make more of an effort and be bold.

Now when I get new matches, I send them messages, and if they don’t reply, I don’t lose any sleep over it. There are many more men out there who will be happy to get in touch.

I have discovered younger men in their mid to late 20s are the most likely to contact me, and I was delighted to learn I am a puma rather than a cougar, as I am still in my 30s.

I used to find the idea of dating younger men somehow unseemly, but now I have got over that. If they want to date older women, who am I to judge and why should I not use that to my own benefit?

Instead, I plan to spend this winter having fun, meeting new people and throwing myself into all life has to offer.  If Mr Right sends me a message in the meantime, I’d still want to meet up with him, but I no longer have a plan.

Rather than wanting to have everything mapped out, I have decided to go with the flow, embrace change and bend with it rather than snap under the pressure of it.

In case you are wondering if my friend’s three predictions were right. Yes, I have dated younger men and I have been sent quite revealing photographs. No, I have not been invited to join anything involving more than one partner!

Six months ago I was despairing, but now I am repairing.

Single Summer is a blogger from North London who has recently started writing about her dating experiences having become single after a 12-year relationship. Follow her on Twitter @SingleSummer.

Why Does Nobody Ask Me Out?