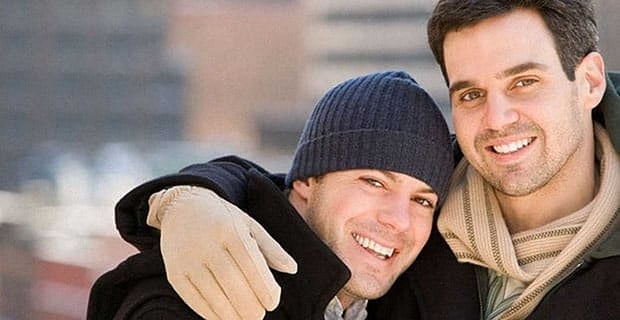 What Can I Expect From My First Gay Boyfriend?

For those of you who recently came out of the closet, this post is for you.

Openly declaring that you are gay takes nothing less than an act of courage, and I applaud you for taking such a bold step to declare the truth about yourself and to choose to live an authentic life.

You are probably feeling a mixture of emotions, both excited and nervous as you get ready to explore your identity as a gay man in the gay culture that has suddenly opened up to you.

A ton of questions may be going through your mind right now, especially regarding love.

Society has given you a fairly good idea of what it’s like to be in a relationship with a girl – hell, you may have even had a girlfriend in high school.

But now you’re playing in a different field.

There are no role models you can turn to on television, no advice Mom and Dad can easily bestow upon you, no biblical wisdom about how to treat your significant other.

It’s pretty much the same as any other heterosexual relationship. There are a few small differences here and there, but for the most part, homosexual couples have the same ups and downs as any other couple.

You meet a boy, go to dinner and a movie, have sex, ask him to be your boyfriend, move in together, fight about money, get a dog, spend Christmas at your parents’ house, complain when the sex gets stale and explore ways to spice it up, relocate when he gets a new job and so on.

Maybe one day you even get engaged, have a beautiful wedding and adopt children or have a baby through the wonders of surrogacy.

Sure it’s not 100 percent the same as a heterosexual couple – no hope of ever getting him pregnant (no matter how hard you try!) and some states still don’t recognize your marriage (so move away!), but otherwise it’s pretty much similar.

“Love your boyfriend as you

would want him to love you.”

The gay culture has historically been anti-relationship, mainly because the rest of society rejected our relationships as valid for a long time.

We’ve evolved leaps and bounds since then, with same-sex couples becoming more integrated into greater society.

But the past history still lingers, and there are some sections of gay culture which flat out deny that gay men have the ability to be in intimate, monogamous, long-term relationships.

This undercurrent can be felt throughout the rest of gay culture – in our societal subconscious if you will – and it does put a pressure on all gay relationships.

However, this isn’t necessarily a bad pressure, as it has allowed gay men to think outside the box of traditional relationship models and explore new ideas, such as open relationships and long-term commitment without marriage or children.

But these currents do exist, and as a gay male stepping into his first relationship, you will be faced with the challenges of sustaining a relationship in the midst of jaded queens, gay dating apps, circuit parties, open relationships and an evolving political struggle over marriage equality.

Keep these challenges on the forefront of your mind, and be prepared to meet them head on should you need to.

They are part of the evolution process as you and your boyfriend grow and mature in your relationship.

Enjoy exploring your first relationship with a boy.

Love your boyfriend as you would want him to love you, treat each other with respect and forge a solid partnership. May you and he live happily ever after.