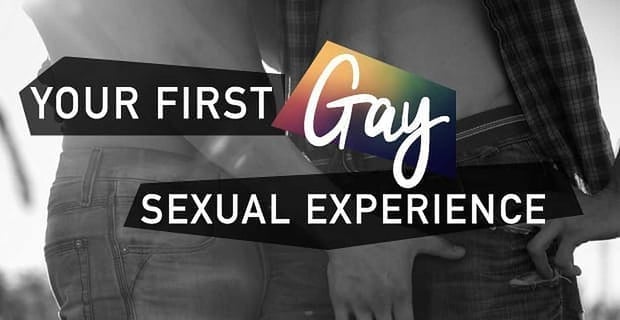 Everyone’s first gay sexual experience is different. It could be a private chat on a  gay hookup site, or it could be a spontaneous makeout session or oral sex with a friend. People usually say, “I’ve known I was gay my whole life.” This may be true for some, but it doesn’t necessarily happen to every gay guy.

I didn’t know I was gay my whole life, per se, but I’ve always known I was different and didn’t quite fit in with straight men or boys. When I was 5 years old, I remember having a huge crush on Aladdin and his purple vest that revealed rippling muscles underneath. Now that I think about it, maybe Aladdin is gay…or at least bisexual!

My first hand job was given to me by my friend when I was 14. Some people lose their virginity by then, but others wait much longer to get intimate. That was the right time for me.
My friend was a childhood friend whose parents were best friends with mine, so we used to see a lot of each other. My first gay sexual encounter happened when he spent the night and things got a little bit “hands on.”

“Your first sexual encounter helps
you understand your sexuality.”

We decided to show “it” to each other and you can imagine the rest. Actually, don’t imagine the rest because that would be sick. We are both underage boys in that fantasy, for God’s sake.

A lot of my friends say their first encounter was similar.

My straight male friends also say their first sexual experiences were hand jobs, while my straight female friends say their first sexual experience was the female equivalent to a hand job.
I know a lot of gay men who tend to have their first gay sexual encounter when they’re quite older, like around their late teens and early 20s, because they finally come to terms with their sexuality and embrace a gay sex life.
As long as both partners consent to the sexual activity and figure out who they are, no matter what age, that is the most important part of a first gay experience.

This first encounter isn’t a precursor of who you are sexually.

A lot of gay men and women sometimes lose their virginity to someone of the opposite sex before they actually come to realization they’re gay.

The Gayly Dose, an LGBT satirical blog started by the hilarious and sharp-tongued @GayManPrblems Twitter account, covers all current pop culture events one laugh at a time. With the blog having an anonymous voice, it is considered to be a "go-to" for everything about love, sex, dating, entertainment and even news.

10 Keys to Boosting Your “Sexiness Factor” in the Gay Dating World: Part 1