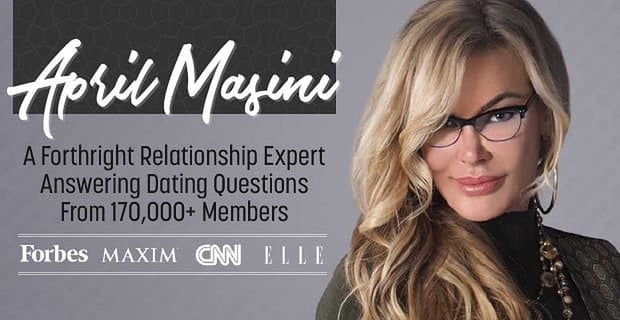 The Short Version: Top relationship expert April Masini built a Twitter following of 1.4 million people by being straight up with daters about what works and why. The TV producer and philanthropist added advice columnist and best-selling author to her résumé because she wanted to impart her deep understanding of relationships to singles everywhere. Over the years, April has written extensively about dating etiquette and relationship issues. Today she doles out advice in an online forum where over 172,000 anonymous users have posted more than 27,000 questions about dating. April answers every query with honesty, clarity, and respect, and she makes specific recommendations on how to woo someone, how to move on after a breakup, and how to deal with various relationship conflicts. April’s insights cover a breadth of topics in the dating world as she helps singles and couples find happiness in their love lives.

April Masini, relationship expert, author, and columnist, is nothing if not honest. She loves helping others by doling out thoughtful dating advice but doesn’t take herself too seriously. “I never intended to be a relationship expert, whatever that is,” she told us. “It just became a runaway train. All of us are on this quest to have good relationships — but, of course, it’s easier to give advice. It’s times when I don’t follow my own advice that I run into trouble.”

She’s cheerful and quick to laugh, with a matter-of-fact perspective on the dating world. The savvy columnist took a roundabout journey from model to TV producer to dating expert and has a lot of life experience to back up her advice.

It was a phone call from the Learning Annex that got April into the dating industry. The online education company tapped her to teach a course for men on how to successfully date. The call came from out of the blue, but she was totally up for the challenge. Within the next few days, she sat down and wrote out a script, entitled, “For Men Only: Date Out of Your League.” Intriguing, right?

The class sold out, and men seemed very impressed by her insights. So she turned the script into a book and became a dating guru for men and women. From there, her business took off, and many top media outlets and companies tapped her for her insights. Today she runs an anonymous web forum, called Ask April, where anyone can ask any question about dating and relationships.

To date, April has answered more than 27,000 questions in an active forum of more than 172,000 registered members. “It takes an enormous amount of time out of my day to read and answer so many questions,” she said, “but I’m very careful about what I say in my responses because it matters so much to people. It can really impact their lives.”

April also writes an advice column with free relationship tips and has published four books geared toward helping singles maintain fruitful relationships. Her reputation for straightforward and useful dating advice earned her great popularity among readers. In essence, April has become the Dear Abby for a new generation of daters on the web.

An Online Forum Gives Daters a Destination for Direct Advice

The Ask April Advice Forum offers readers an anonymous place to ask any question about dating and relationships — whether you’re wondering if you should pay on the first date (April says the person who did the asking should do the paying) or if you should go through with an upcoming marriage (she differentiates between normal wedding jitters and legitimate concerns).

Heartbroken 20-somethings ask how to get her back, conflicted 40-somethings wonder if divorcing him is the right choice, and other daters from all walks of life seek April’s guidance in personal matters of the heart. Over 170,000 members welcome April’s straightforward and constructive recommendations.

“I’m no-nonsense with my advice,” she told us. “I don’t pull any punches. While I don’t set out to hurt anyone’s feelings, I will say it like it is.”

On her forum, April has provided detailed and thoughtful responses to hundreds of thousands of long, pained queries. She has a deep understanding of dating etiquette and assesses individual situations from an unbiased standpoint. Her tips on how to woo a date and how to maintain a relationship are spot on. In her responses, she emphasizes self-esteem, compromise, and empathy as the hallmarks of a successful dater.

“People’s love lives are very important to them, so I feel a lot of pressure to get it right,” she said. “I can’t be flippant in my answer. I take all questions extremely seriously and go to great lengths to think about what I’m going to say to help people as best I can.”

April’s first book, “Date Out of Your League,” was published in 2003 when she was just reaching her stride as a relationship expert. This revealing self-help book provides men with strategies to date the women of their dreams. She delves into what makes up attraction and basically teaches you how to game the system with killer self-confidence.

“Date Out of Your League” is a provocative exposé on effective dating tactics.

The phenomenal success of her first publication led April to write other helpful guides for singles everywhere.

Published in 2005, “Think & Date Like a Man” instructs a female audience on how to attract and keep a relationship with a quality man. As an author and dating expert, April’s honesty is a breath of fresh air to readers who often wonder what’s going on in the minds of the opposite gender.

“A bold, in-your-face guide to becoming what a man wants,” praised Heather Froeschl of the Quilldipper magazine. “April opens up in true girlfriend form.”

Her latest ebooks, “Ideas for a Fun Date” and “Romantic Date Ideas,” put forth dozens of unique and inexpensive date options to help daters break the mold, shake up their routines, and create lasting memories.

According to the book description, “If you want to eliminate guesswork, crush your insecurities, build your confidence, and quash any fear you have of dating — ‘Ideas for a Fun Date’ is the book for you.”

When asked about her favorite success story, April told us the story of her neighbor and walking partner, Jeanette. This single woman was in her mid-50s and worried that her dating days were behind her. “I told her you don’t have to be young to be attractive,” April explained. “It took four years of us walking around this loop in our neighborhood until she believed it and realized that she herself is the prize.”

Jeanette changed the way she viewed dating thanks to her long chats with April on their walks, and she met a fantastic man who’s now her husband. April loves seeing the couple together and knowing she had a hand in helping her friend feel worthy of such a wonderful man.

Oftentimes, April doesn’t get to see how her advice pans out in the real world. Her many online pen pals don’t typically follow up beyond a simple thank-you message, so she can only hope they take her advice and find happiness because of it. With Jeanette, she got to see the seeds she planted blossom into a loving relationship.

“Of course, not everyone is going to be your cup of tea — and vice versa — but you have to know your audience and play to your strengths.” — April Masini in her Relationship Advice Forum

An 18-year-old in Australia, under the username casyjames, recently posted about a guy she dated who was contacting her less and less. “I just feel so confused,” the single girl wrote. “I know he wants nothing to do with me and made that very clear, but I just want to know why.”

April answered that the guy either met someone else or isn’t interested in dating her anymore, and he’s ghosting because he doesn’t want to say anything hurtful. “I know it’s disappointing to be rejected, but dating is a way to get to know people,” she said. “When you do get to know each other, you find out about them — and yourself and yourself with them. You may not like everything you learn, and you may see incompatibilities that make you want to move on.”

April Masini Offers a Sounding Board For Your Relationship Woes

Decades ago, April fell into the role of relationship expert and has built grassroots success by giving her honest opinions about dating etiquette. Her deep emotional awareness captivated audiences in her advice forum, books, and advice column.

Today April boasts a remarkably robust social media presence with 1.4 million Twitter followers and 620,000 fans on Facebook — not to mention the nearly quarter million registered users on her online forum. She gets to the heart of attraction in a way that’s accessible and enlightening to singles all over the world. If you’ve got a question about a first date, a long-distance relationship, a broken marriage, or any type of dating issue, April offers prompt, incisive, and direct feedback on her online forum and advice column.

April empowers singles to approach dating with confidence and finesse under any circumstances. “The key is to have self-esteem and believe in yourself,” she told us. “If you believe you’re worthy and make yourself the best version of yourself you can be, that’s how you’ll find success in your love life.”