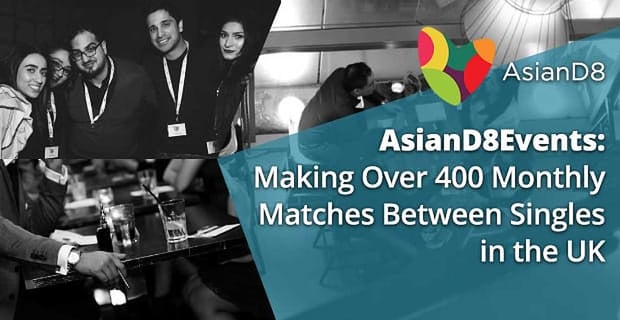 The Short Version: Singles today have so many social avenues and opportunities to make a date. AsianD8, a UK-based dating company, helps thousands of Asian singles meet date prospects both online and in person. Every year, AsianD8Events provides Asian singles with a full calendar of over 150 events where attendees flirt with one another in a low-key setting. At ping-pong competitions or speed dating nights, singles have an easier time breaking the ice, making new friends, and building relationships based on common interests. These niche events bring people together through shared values by catering to Hindu, Sikh, Muslim, and other Asian professionals living in the United Kingdom. Since 2003, AsianD8Events has facilitated hundreds of matches between singles looking for a chance to meet the perfect partner. If you want to meet new people, AsianD8Events can introduce you to a roomful of like-minded daters enjoying a fun night out.

Typically, finding love isn’t something that just happens; it takes some effort to put yourself out there and meet new people. In Sonia’s case, it also took a little badgering from her friend. “Ed kept bugging me to go to a dating event,” the single woman said. “Eventually, I gave in just to keep him quiet.”

AsianD8Events inspires matches between many happy couples, including Sonia and Rupi.

She agreed to go with Ed (as friends) to a Valentine’s Day event held by AsianD8Events. She figured since she didn’t have a date anyway, it couldn’t hurt to check out the local dating scene and meet other Asian singles. So Sonia and Ed showed up to the padlock party at Frederick’s Bar in Birmingham, England, and started mingling.

“I had no real expectations of the night and what was about to come,” Sonia recalled. “I went up to Rupi and asked him to try my padlock, and, coincidentally, it worked!”

The newly introduced couple went to pick up their raffle tickets together and struck up a conversation along the way. Sonia thought the initial spark would inevitably fizzle as time went by, but Rupi was dogged in his attention. They met up three times that week. By the third date, they were hooked and have been pretty much inseparable ever since.

In her success story, Sonia said she was happily engaged to Rupi and thankful for the AsianD8 event that brought him to her. Though she went in a little skeptical, she came away with a life-long love. You can’t beat that!

AsianD8 gives singles the tools to build connections with one another online and in person.

AsianD8Events offers outgoing Asian singles an alternative to online dating through themed parties, including speed dating, pizza classes, and ping-pong competitions. Since May 2003, the UK dating company has hosted engaging events for thousands of singles looking for friendship, romance, and love.

Currently, AsianD8Events organizes more than 150 events a year to tempt Asian singles in London, Leeds, Birmingham, and Manchester. These fun events encourage Asian singles to meet new people and start a conversation in an informal setting.

“We want to provide the perfect environment for guests to mingle and talk as much as possible.” Jyoti Ghelani, AsianD8’s Events and Marketing Manager told us. “After all, it’s the people who make the events, and it’s the matches who make the success stories!”

After decades of running events for Asian singles, AsianD8Events has the process down to a science. Many people attend their events, especially the infamous padlock parties, to meet tons of available men and women who are interested in making a date.

There’s something for everyone at the speed dates, pizza classes, matchmaking consultations, and other general minglers. “We completely understand how a lot of people can feel nervous at our events,” Jyoti said, “so we do try to ensure there are plenty of icebreakers and activities.”

AsianD8Events’ Pizza Masterclass, for instance, invites attendees to learn something new (and enjoy something delicious) while meeting singles with similar tastes. A glass of bubbly and tasty appetizers start off the night and help people loosen up while mingling with one another.

Hungry professionals come out to AsianD8’s Pizza Masterclass to mingle with local singles.

Once the event gets underway, attendees handcraft their own pizza while a professionally trained chef offers pointers and encouragement. Then a little lighthearted competition and speed dating tops off the night. What’s great about the Pizza Masterclass is it comes ready-made with conversation starters like “What’s your favorite topping?” or “What’s your favorite pizza place in town?” Plus, you have the chance to impress a date by winning a head-to-head competition like the Calzone Challenge.

AsianD8Events gets people moving, thinking, and talking. The activity-based gatherings are ideal for daters looking to mix it up with a crowd of new and interesting people.

Jyoti said the speed dating events are the most popular events the company puts on. Hundreds of singles flock to these fast-paced events every month. Each event is limited to about 40 to 60 singletons, who have three minutes to introduce themselves before moving on to the next minidate. Each person gets a matching card where they can discreetly indicate who they’d like to see again. The team notifies attendees about mutual matches within 48 hours of the event.

These events typically take place in a relaxed bar setting where singles can mingle before and after the speed dating officially starts. It’s a fantastic way to meet dozens of date prospects in one night and jump-start your love life. To use the words of the website, “The love of your life isn’t going to come into your living room singing and dancing and sweep you off your feet. You have to be proactive.”

Dipa and Saumil felt an undeniable attraction when they met at a London speed dating event held by AsianD8Events.

Plenty of singles have wound up in lifelong relationships after attending one of these speed dating events. Dipa, for instance, arrived early for an event in London, so she sat at the bar with her sister and cousin. Saumil was also there early and introduced himself.

“Saumil said he liked my smile, and I admired his confidence,” Dipa said in her testimonial. “After the speed dating was over, we exchanged numbers, and then, after a few texts, we went on our first real date.” Today, Dipa and Saumil are happily married because they were introduced by AsianD8Events.

Another anonymous speed dater said he fell in love with the first date of the evening one fateful November night in 2003. “I made my way round through the night, but the only name that stuck in my head was Sheila,” he recalled. “I just felt connected to her.”

They both matched with one another and exchanged numbers that night. He couldn’t even wait to get home before he called her. Almost two years later, in October 2005, they were married. In 2008, they celebrated the birth of their son Eashan. The man wrote to AsianD8Events to say thank you: “If it wasn’t for you, I would not have met Sheila. I would not be as happy as I am today.”

Many Daters Hit It Off During Dynamic, Activity-Based Evenings

AsianD8Events offers a low-pressure night of mingling among new friends and potential dates. The event organizers have seen lots of people come away with a new date or a budding relationship. In fact, AsianD8Events has made over 400 monthly matches between singles with similar interests and values.

One single man said he met so many fantastic women at an event and had such a good time that he immediately bought himself a ticket for the next Hindu event in his area. However, he ended up seriously dating one of the girls from that first night, so he transferred his ticket to a friend.

“I’m surprised at how quickly it’s all happened. My friends all want to go speed dating now!” — R., an anonymous speed dater at an AsianD8 event

What’s great about these events is the unique setting gives people something to comment on and experience together. It’s an adventure that invites conversation. “I’ve got two dates over the next week,” said S. in yet another testimonial. “It’s quite a laugh just meeting up afterwards and talking about the evening.”

Jyoti said their many success stories from married couples are “a testament to how important it still is to meet face to face and not just online.”

At AsianD8Events, Singles Can Meet Hundreds of Date Prospects

So many singles, like Sonia and Rupi, have met their partners thanks to AsianD8Events. The relaxed atmosphere and easy icebreakers at these events facilitate deep connections between attendees hoping to meet that special someone.

The ideal dating environment is wherever you feel most comfortable being yourself and having fun. It’s a place where people with similar interests can gather and start a conversation. Ultimately, that’s what AsianD8Events seeks to create for Asian singles in the UK. Whether you’re looking for a lifelong partner or just something to do on the weekend, AsianD8 events are full of social possibilities and laugh-out-loud fun.

“We are now tying the knot in August this year! So thank you to AsianD8,” Sonia concluded in her testimonial, “and a bigger thanks to Ed for bringing us together on that night.”