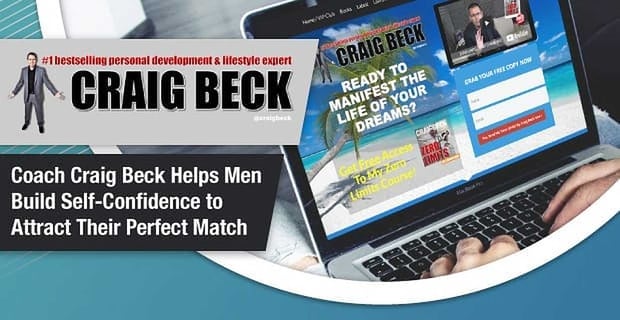 The Short Version: Craig Beck settled down at a very young age, and, once his 18-year marriage ended, he had no clue how to date. He was shy, lacked confidence, and was terrified to approach women. After investing significant time and energy in working on himself, he developed the self-esteem and confidence necessary to find fulfillment. Using the blueprint of what worked for him, Craig now offers one-on-one coaching services and online courses through his Law of Attraction University to help men gain the tools and mindset needed to form healthy relationships and achieve success in other areas of their lives.

Craig Beck grew up attending an all-boys school and was terribly shy around women. Even as he developed a successful radio broadcasting career, he was still painfully clumsy when it came to interacting with the opposite sex.

When Craig entered his first real relationship, he settled down right away, got married, and had two kids. But, 18 years later, when the marriage ended, he said he had no dating skills and was clueless as to how to form a new relationship. He then set out on a journey to find his soul mate.

“I was in my 30s, and I just had no idea what to do,” he said. “I was terrified of approaching women I was attracted to; I was scared of being rejected.”

Craig began exploring the cause of his fear and why he and men like him find approaching women so daunting.

“I think it’s a very deep fear within men and certainly within me,” he said. “And I had to learn how to deal with that first — how to deal with my own self-esteem and confidence and work on that before I could move forward and get into the kind of relationships that were fulfilling and weren’t these dramatic things that just lasted a couple months and stopped.”

Once he built his own inner confidence, Craig told us he cured himself and documented his journey to success. He now uses this blueprint to help educate other men through one-on-one coaching sessions, online courses, and numerous books. He also coaches people on finding financial success, quitting alcohol, and other areas of improvement.

While Craig said some men he encounters are simply seeking sex, he noted about 80% of the time the men he meets are looking for a soul mate.

Craig uses his personal experience to guide single men toward dating success. He told us he often encounters men who are very successful in their careers, but they can’t get it together in their relationships. These men often come to Craig because their relationships aren’t fulfilling, they’re being mistreated, or just aren’t compatible with their partners.

“They feel frustrated that they’re not in a connected, loving relationship they imagined they could always get to, but I think most problems with relationships are a reflection of what’s going on inside you,” he said. “The quality of your relationship is a direct reflection of your mental state and how you feel about yourself.”

Craig believes the problem is everyone is looking for the solution externally. The solution, according to Craig, starts from within the individual. He instructs his clients on how to build self-esteem and work on themselves before they go out looking for the person they’re meant to be with.

The other most common mistake men make in dating, Craig noted, is assuming that women think and process attraction the same way men do.

“Men are very visual and logical and black and white,” he said. “A guy looks at a woman and finds her attractive and that’s pretty much it — it’s done and decided in his head. It’s a much more emotional decision for women; it’s not just a switch. The saying goes that for men it’s a switch, for women it’s a dial.”

Craig told us this means men need to be more tactical with how they think and understand how their message is perceived because it’s often different from how they intend.

The Law of Attraction® Shows People How to Manifest Their Dreams

In addition to helping men understand their dating mistakes, Craig also helps them learn how to manifest their desires through his online collection of courses at Law of Attraction University.

He said most people’s’ exposure to the concept of making dreams reality is from Rhonda Byrne’s book “The Secret.” However, people often misinterpret its message and believe it means that, if you think about something, it becomes reality.

For example, some believe the concept involves concentrating on, say, a sports car, and if they want it badly enough, they’ll obtain it. But, when it doesn’t happen, they believe the Law of Attraction doesn’t work.

Craig often relates this back to money. We’re taught from a young age that money is hard to come by and it’s scarce, but because you have that mindset or belief, it’s why you don’t have as much as you want.

“People are constantly sending out this vibrational command to the universe that money is hard to come by, and the universe responds by giving them that,” he said. “If you can change the waves of energy you’re sending out about something so you believe money is easy to come by and money just flows into you life, if you can get to the point where you believe that and not just think that, then miraculous things start happening.”

While he admits it may sound crazy, Craig said embracing this mindset has produced positive results for so many of his followers. If you can get to the point where you believe the world is out to do you good, positive things will start appearing in your life. Craig’s courses help people learn how to utilize this concept to have success with dating, finances, and any other areas of their lives they want to improve.

Some dating and life coaches are the warm and fuzzy type. Craig is not. He pushes people hard because he said he believes the only way to really learn and grow as a human being is to experience uncomfortable situations. And you can’t grow and develop just reading about these things while sitting in a cozy armchair.

He believes most people stagnate because they refuse to put themselves in that type of situation. For clients brave enough to work with him, he will push them to the point where they may want to quit.

“But I do that because it’s how I’ve dealt with myself,” Craig said. “I’ve always put myself into situations where I feel slightly out of control because it’s the fastest way to grow.”

One of Craig’s favorite coaching stories was when he spent an intensive weekend coaching a client one-on-one in London. He said the client was an incredible guy: he came from a broken home with a humble upbringing, and started his own successful business.

But when it came to relationships, Craig said the man felt unattractive, ended up with women who treated him poorly, and didn’t feel worthy of the sort of relationship he wanted.

“I just said to him, ‘You’re such a valuable man. You need to see what I see right now looking at you,’” Craig said. “He was incredible, but he had this negative energy of himself that he’s not of any value to a woman, so he was always approaching relationships from the bottom of the totem pole looking up to the top, always asking women from below saying ‘Please give me a chance.’”

After spending an entire weekend together coaching and self-esteem building, Craig said the client was full of confidence and a different person. They walked around London, and the client confidently approached many women in the street.

“He was just a machine!” Craig said. “And to see a guy go from floundering and with such a low opinion of himself to the point where he’s just bouncing up and down with excitement, it’s just one of the most powerful gifts that this job has ever given me, just to take someone from zero to 100 in the course of a weekend.”

While Craig has eked out a successful living, he used to suffer in silence with alcoholism, which he says dominated his life for over a decade.

Because of this, Craig said helping people with alcohol addiction currently takes up most of his time since it’s a growing problem and one he intimately understands. A lot of people who overdrink are still functioning in society, so many people don’t know they have a problem.

To help these individuals cut back or quit drinking, Craig has a free ebook called “Alcohol Lied to Me,” plus an online course to help people learn how to control or cut off their drinking.

“When I help people with their alcohol addiction, it does feel like I’m literally saving lives and saving families,” Craig said.

And, for Craig, helping people solve problems, whether it be giving them the tools to forge relationships or make a fresh start in life, is what it’s all about.