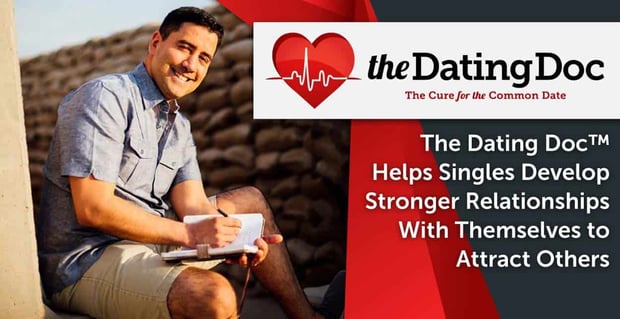 The Short Version: Many singles dream of a healthy relationship, but if they haven’t experienced one, it’s often hard for them to envision what a healthy relationship looks like. Chris Feliciano, a relationship and dating coach also known as The Dating Doc, learned about the importance of relationships as a U.S. Army Major stationed in Haiti. He saw how connected the people were and decided to help people in the U.S. strengthen connections and discover healthy relationships by first looking at themselves. Now, Chris hosts a dating bootcamp, individualized coaching sessions, and writes an informative blog — all while maintaining his career in the armed forces.

Relationship and dating coach Chris Feliciano wakes up at 5:30 every morning and gets right to work. He checks the news, scrolls through a few apps, and looks at his emails and his text messages before brewing his morning pot of coffee.

Around that time, Chris, also known as The Dating Doc, starts getting WhatsApp messages from his colleagues looking to go over ideas for media outreach for his coaching services. Then, he typically walks his dog and does a little work on his podcast.

That sounds like a full day, but Chris is just getting started — and his full-time job awaits. So he laces up his boots, zips up his jacket, and checks the American flag patch on the shoulder of his uniform before walking out the door. That’s because The Dating Doc is also a Major in the U.S. Army.

The Dating Doc teaches people how to improve their dating techniques.

“At first, it was the uniform and customs that appealed to me, but eventually, the vision was to be a servant leader,” he said.

Interestingly, the two professionals dovetail nicely. Chris serves his clients as a dating coach and his country through his work in the Security Cooperation Division of the Army. The division coordinates with other countries to strengthen relationships with the U.S. military and find opportunities for improvement.

Both in the Army and for his dating clients, Chris is on a mission to improve relationships. That’s why he developed the Dating 2020 Bootcamp, a 30-day online course that includes videos and assigned accountability partners who will help participants on the path to improving their relationships.

Scenergy Dating Teaches Clients to Understand Why They Need Love

Chris began his path in 2010 when he was a full-time military officer spending his days working out, reading in local coffee shops, and becoming frustrated with dating. He started to wonder what was missing when he found himself deployed to Haiti, which had just suffered a devastating earthquake.

In addition to running his coaching business, Chris Feliciano is a Major in the U.S. Army.

That’s when he discovered something he felt was missing in American culture. Haitian people valued — and worked on — their relationships. Families, couples, singles, and even children were smiling, hugging, and spending time talking to one another.

Meanwhile, in America, Chris noticed that people often isolated themselves with their mobile devices — even when they were in social settings and hoping to meet someone. His interest in becoming a relationship and dating coach took off when he read the Tim Ferriss book, “The 4 Hour Workweek.” After that, he focused on learning about business and relationships, and soon he launched his first company, Scenergy Dating.

He organized matchmaking events and gained a dedicated following of coaching clients in more than 12 cities across the United States. Many of his clients were high-level executives, and he earned plenty of media attention. But he knew he had more work to do.

The clients he worked with who were successful in business, but not in love inspired him to go further.

An Informative Podcast Filled With Tips for Dating Success

To help people find their reason for love, Chris launched The Dating Doc podcast — which is available on Spotify. In a recent episode, he talked about someone who was showing others screenshots of conversations they had with someone they were dating. He said that you’d never see a CEO doing that kind of thing.

Another podcast episode focuses on the importance of values, and Chris said he often hears from clients that they want to meet someone compatible in that area. But the meaning of that isn’t always clear. Chris said that values are different than religious beliefs. One example of a value system is following through on something when you say you’re going to do it.

For example, committing to show up on time for a date and following through is part of someone’s value system. He added that it’s surprising how, regardless of age, some people still aren’t accountable to their word.

He offers plenty of free advice on social media but also works one on one with clients who are ready to let go of the barriers preventing them from establishing healthy relationships.

“Change takes effort, and time passes us by,” he said. “Relationships with yourself, others, and a team are what builds the foundation of culture — and even business. I’m proud to help others understand that value.”

In addition to his military duties, Chris designed a bootcamp course called Dating 2020, which he plans to release soon. He said it’s geared toward single professionals from all backgrounds who are looking to find love.

Chris said that process is much more than reading a few tips or tricks. According to Chris, people need to develop a stronger mindset that aligns with the direction that’s best for them, whether they want to date online or find someone through more traditional means.

Dating 2020 Bootcamp allows participants to work on their dating skills with the help of an accountability partner.

As part of the bootcamp series, Chris assigns participants with an accountability partner with whom they can check in periodically. Participants also work on fun, interactive challenges as part of the video series — which includes plenty of valuable advice from Chris.

“Relationship-building transcends the dating service space,” he told us.

That’s why Chris works to build custom dating plans for both men and women, which are available through his website. He also publishes a blog filled with lessons designed to help singles navigate the dating world with grace.

One blog offers five refreshing tips for a great dating life that readers won’t find elsewhere. The first tip is not to neglect other areas of your life just because someone new catches your eye. Another is to have patience with new people because allowing others to live their lives reflects both emotional maturity and emotional independence.

And, perhaps most importantly, he encourages singles to remain positive, even after rejection.

“It’s important that you see yourself as the prize and maintain a positive outlook because meeting the right person is dependent on your mindset,” Chris wrote in the post. “Remember, you can’t invest negative emotions and expect positive outcomes.”