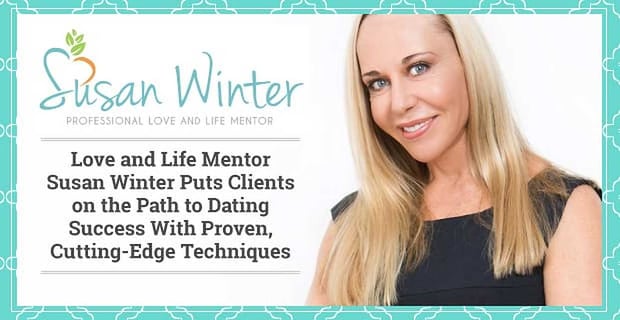 The Short Version: It was an unlikely transition when Susan Winter made the move from opera singer to professional love and life mentor, but it was a trajectory that has proven beneficial for countless clients seeking to make meaningful connections with others. Now a best-selling author and writer of numerous books on strengthening relationships and honing life skills, Susan and her expertise have been featured on many major networks and programs, including CNN, NBC, and The Oprah Show. Her guidance comes in many forms, whether it’s in the articles or videos on her website or through one-on-one or group consultations. And, with a mission to empower modern singles to reframe how they navigate the world and their relationships, Susan is sure to continue to provide personalized, hands-on advice and coaching well into the future.

For Susan Winter, who spent years showcasing her voice to audiences as an opera singer, performing one-on-one consultations as a love and life mentor was a big professional change. On top of that, trading a physical stage for a virtual one also presented challenges for the self-admitted not-so-computer-savvy Susan. Even now, she jokes about sometimes relying on her IT pro, Johnny, who she calls the Make-it-go guy, for many of her tech-related needs.

“I never anticipated this career,” she said. “This was completely accidental.”

Still, since Susan is a broad-based communicator at heart, she hit the ground running, and her first book, “Older Women and Younger Men,” soon became a best-seller. She’s thrived behind her ability to take difficult concepts and make them easy and relatable. That’s why she’s been featured on several notable networks and programs, including CNN, NBC, CBS, and The Oprah Winfrey Show, among others.

Susan’s goal is to provide clients with a solid game plan for dating success and greater confidence. Her website, SusanWinter.net, which launched in 2011, features more than 150 articles that cover topics like hot and cold behavior, pulling away, breakups, getting to commitment, and dating games. The site even dedicates an entire section to older women dating younger men.

More recently, Susan has placed an emphasis on videos by producing two per week on her YouTube channel, which has nearly 200 uploads and almost 6,000 subscribers. But her favorite part of her job comes with the interactions she has with clients through consultations. Though she conducts one-on-one sessions in person, Susan holds the majority of sessions via phone or Skype since her clients hail from across the globe.

Susan provides a variety of avenues to help her clients based on need. If someone turns to her and desires pointed, personalized attention, she can deliver. Conversely, if clients feel they might benefit more from a community-based learning environment, Susan holds various group sessions that still provide a hands-on approach.

Her newest addition, A Day With Susan, gives the client a chance to spend five hours in person with her. The session can take place in New York City or Scottsdale, Arizona, depending on the season.

Lunch is included in the cost of the session, which Susan describes as a specialized format that’s meant to draw major breakthroughs.

“If you’re stuck, confused, or just want to improve your dating and partnership skills, this is the correct choice for you,” she said.

Susan’s individual sessions don’t run as long as the five-hour plan, but they’re still very effective and can be conducted in person or via Skype or some other mobile service.

You can be invited to join Susan’s VIP Club by booking 10 individual sessions or Days with Susan. The VIP Club’s 45-minute sessions are conducted only via Skype or cell but are about half the price and include premier booking times.

The Group Coaching Party Susan offers is conducted over Skype and lasts 75 minutes. She has somewhere between two and six people shooting her questions about love, dating, and relationships. This is intended to be more of a casual setting and is the most popular choice by far among her clients.

“It’s a party because there are times when you just want to kick back with your friends and ask the expert anything,” she said. “You can add people if you’re hosting it, and the price comes down. The more people you put in, the less it is, and it’s fun. People are drinking, they’re asking questions, they’re having a good time, and we can get information out in a fun environment.”

Susan thinks of herself as somewhat of a doctor, but she believes the first visit with her client will also be her last. Her goal is to teach them how to break away from needing her help. This ultimately reassures her that she’s doing her job properly.

“The moment I get a client, I know I’m going to lose them,” she said. “And that’s the good news because it means they’ve been fixed, and they’re on their way.”

In fact, it doesn’t take Susan’s investigative mind very long to sift through the debris and discover the culprit.

“Whatever the original problem was, by hour two, I’ve gotten underneath it, and that’s the a-ha moment,” she said. “I think it is the most rewarding thing I have ever felt in my life to know that, in a short amount of time, somebody can be completely transformed and that it’s holding.”

Advances in technology facilitate sending quick and easily absorbed information — a must for Susan. She calls these “potent messages” and produces them through short-form books and audio clips. The quick dissemination of these messages is especially important to members of her audience who are facing a crisis and can’t be left the open water for days before someone brings a buoy.

Susan learned this from her experience working as a TV host and moderator for the Financial News Network (now CNBC), and as the on-camera spokeswoman for over 200 Fortune 500 companies. Her videos are no longer than five minutes and are typically structured by setting up the issue, the strategy to fix it, and the happy ending. She stresses the significance of that last part because she knows her advice is being consumed by those living in “emotional chaos” and seeking a path out of it.

Susan’s job isn’t easy. She describes it as not only having to prescribe her clients a pair of glasses, but she must get them to see their situations through a completely different lens. Their perceptions have been shaped, most often in a negative way, by the world around them or by their own imagination, and she wants to encourage them to break from society’s influence.

“I have to alter their narrative, and, to do so, I have to walk them through a series of logical progressions, but I have to make it really easy to understand like day-to-day life examples,” she said. “I think that’s why I have such tremendous success getting them to just leap over this boulder that they thought they could never get over because I try to explain it in a way that’s so crystal clear that they absolutely see it in their mind and then get it. And then I know that there’s a healing that’s happened.”

In countering all the aforementioned negativity, Susan’s mission is to get her clients back to their own “power base, confidence, and internal wisdom.” As she puts it, if she’s teaching them correctly, they learn to never need her.

Susan stressed that her line of work can act as a temporary stimulant or a medicine that treats the symptoms and not the underlying problem. The client can feel good for a couple of days before they slide back into their old ways. On the other hand, she told us, a true transformation has a lasting impact or ripple effect. That can only happen from within and through logical premises that can serve as a bedrock in the enlightened brain.

“What impresses me the most is when they say, ‘I always felt that, but I didn’t know how to state it. You made it so clear for me,’” she said. “When I get those comments, that means I’ve directed them back to their inner awareness.”

While Susan coaches both men and women, most clients tend to be the former as well as busy professionals. She even has some long-term clients who work with her every two months.

“They’re on a long-term scale of developing themselves as a human being, so I schedule the check-ins and rearrange the game plan accordingly,” she said.

One interesting thing Susan has noticed from all her time talking to people who need guidance with relationships is that a significant number want to be guided back where they came from.

“This has been a time period that is punctuated by more people wanting to reconnect with their ex than I have ever seen in my lifetime,” she said. “I think it’s because getting into partnerships is so much harder these days that when you connect with someone and you have found love, that’s the last point you remember getting it. I think there’s a greater tendency to want to go back to what did work.”

Up Next for Susan: Expanded Resources for Modern Singles

Susan said she is excited about several things coming down the pipeline. At the moment, though, her main goal is to continue expanding her collection of videos, specifically on YouTube.

Her versatile background going from opera singer to TV host to professional love and life mentor proves Susan is more than willing and able to try new things. She’s got the expertise to help you make relationships work, and she told us if the tech aspect ever gets in the way, her IT guru Johnny can “make it go.”