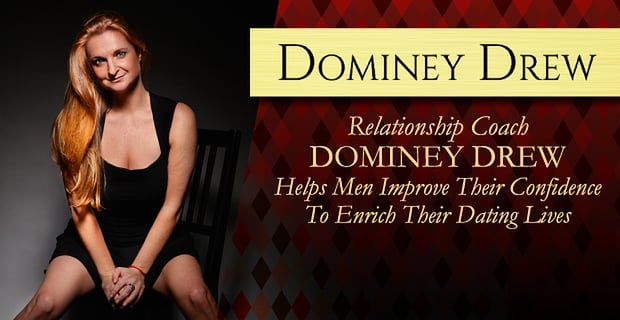 Short version: Relationship Coach Dominey Drew helps men find romantic partners who are waiting, as she puts it, “for you to get out of your head.” Many of her exclusively male clients are confused about why they’re perpetually single or attracting the wrong sorts of women. Using methods she has developed, Dominey help clients make permanent changes in their level of self-confidence and feelings of self-worth. She employs a variety of methods, including one-on-one coaching, a radio show, and an online course called “The Art of Attraction” to give her followers the dating help they seek.

Relationship coach Dominey Drew doesn’t merely advise couples; she practices what she preaches. When she began her work in the field 15 years ago, she was in a stage of her life that was similar to that of the men she coaches today.

“I’m a poster child for my method’s success. I was really struggling when I started,” she said. “I had low self-confidence. I had terrible body image issues and massive insecurities. I was limited, unhappy, and incredibly lonely.”

But then she started employing the methods she offers to her clients. She began to understand that many of her insecurities could be traced back to events from her childhood.

Once she made those connections, Dominey began to work through each of her issues. That’s when she started seeing some dramatic results.

“My physical body changed because I wasn’t holding on to as much. For me, it was guilt and shame that were manifesting as weight that I couldn’t lose. My outlook changed. Now, I’m 180 degrees from where I started,” she said.

Dominey Drew shows men how to break down self-imposed barriers.

Dominey said she believes that the work she put in to change her own mindset makes her a better coach for her clients today. The men she works with often struggle with self-doubt and negativity. Rather than just being an aspirational guide for them, Dominey can put herself in their shoes.

“I’m familiar with all of those voices in your head telling you how embarrassed you should be,” she said. “I had the loudest voices in my head, and, now, they’re gone. I’m so much happier. I can attract partners when I want them.”

Dominey’s clients struggle to find partners because of their demons. Her work is not about offering them tips and tricks. Instead, most of her clients’ dating issues stem from their lack of self-confidence.

“I help guys see how they’re holding themselves back from what they want,” she said. “A lot of guys say that they don’t know what to say to a woman. I tell them that it’s not about what they say, it’s about confidence.”

Most of the men Dominey works with have difficulty finding the long-term partners they want. Much of the time, that stems from dating troubles — even though they seem to be doing all of the right things.

“I work with guys who are in their 30s, 40s, and 50s,” she said. “They’re perpetually single, and they don’t know why. And they’re doing everything right and still aren’t getting results.”

Meanwhile, some of Dominey’s other clients struggle instead with continuously dating women who are wrong for them.

“They repeatedly attract the same relationship over and over again,” she said. “It ends up in that same pattern.”

“Why are we continually drawn to relationships with drama? The answer is easy to find — it’s always inside ourselves.” — Relationship Coach Dominey Drew

But whatever her clients’ outcomes, their core issue is often the same: low self-confidence. That manifests itself in anxiety and overthinking whenever they approach an attractive woman.

Dominey coaches what she calls “the art of attraction.” The idea is that her clients are subconsciously blocking themselves from what they want. The process of developing the tools they need to attract others helps these men change their mindsets and build intimacy with themselves and the world.

“Why are we continually drawn to relationships with drama? Or people who aren’t trustworthy?” she asked. “The answer is easy to find — it’s always inside ourselves.”

When clients finish working with Dominey, they don’t revert to their old patterns and ways of thinking. Instead, the changes are permanent.

“It is really about changing from the inside out,” she said. “That’s the way to make the coaching process permanent. The changes you make with me, they never reverse. When you work through those issues, you’re finished.”

Accelerating Self-Esteem With “The Art of Attraction”

While many of Dominey’s clients work with her one-on-one, she does have alternatives for daters who prefer more flexible options.

The first is her eight-week training program, called “The Art of Attraction.” In this program, Dominey lays out the strategies she’s developed throughout her 15 years of coaching to help men break their bad habits.

“The training program gets you out of that cycle of loneliness and teaches you how to attract a woman you can see yourself spending your life with,” she said. “I go through it from the first step to the last step. I say, ‘Here’s what you do, and here’s what you do next.’”

Disappointed daters don’t have to wait for the course to start. Instead, they can begin it whenever inspiration strikes.

“The content lives online, so people can contact me to enroll, then start the course. They’ve got a path to follow at their own pace,” she said.

“I like to answer questions directly. Sometimes I’m teaching people what to look for, but it’s also a chance for people to get some free help. Then everyone else can benefit from others’ questions.” — Relationship Coach Dominey Drew

But they aren’t completing the coursework without added support from Dominey. Instead, she’s always monitoring her students’ progress.

“Twice a week they have support from me,” she said. “I’m on live group coaching calls twice a week to help people through any issues. On their call with me, we go to the core of the problems, and we address them right on the call. That’s really where the magic happens.”

In addition to the course, Dominey hosts a weekly radio show, which is also called The Art of Attraction. She streams the show on Facebook Live and thinks if it as free coaching for listeners.

“I like to answer questions directly. Sometimes I’m teaching people what to look for, but it’s also a chance for people to get some free help. Then everyone else can benefit from others’ questions,” she said.

Dominey: Producing Results That Change Clients for the Better

Dominey has a track record of helping men forget about relationships they thought were enmeshed in their psyches forever.

“I have a testimonial from one client who was holding on to a past relationship for about a decade,” she said. “After the first session with me, he was able to let go of it. After 10 years of struggling, it just wasn’t there anymore.”

So what’s next for Dominey? Her next project is to roll out a new version of her dating course “The Art of Attraction.”

Dominey is updating her course material to include more informative videos.

“I’m in the process of creating version 2.0. Everything is moving to video to make the lessons clear and more succinct. That clarity can be important when you’re talking about inner work. What is the felt experience of that? The new version will make it even clearer. Anybody can say, ‘I have this problem,’ and I can reply, ‘Here’s step one, step two, and step three.’”

Even though she has been helping men improve their lives for more than a decade, Dominey is just as passionate about her profession as she was when she started.

“It is absolutely why I wake up every morning,” she said of seeing the regular improvements in her clients. “It’s why I do this work. That’s what I did it so intensively myself because it works. I was in love with the results, but it’s getting results for others that I’m most passionate about.”