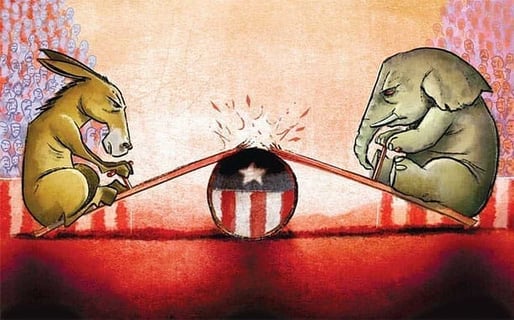 The sex lives of Americans is ever changing according to psychologist Mark Regnerus Ph.D., whose provocative “Premarital Sex in America: How Young Americans Meet, Mate and Think about Marrying” makes that clear. Today, more than 90 percent of Americans have sex before they say “I do.”

Maybe we’re becoming more liberal with our sex lives, or maybe the sex lives of the red and blue don’t differ as much as we think they do. Whether conservative or liberal, emerging adults are having sex at the same rate.

According to Regnerus, “red” and “blue” differences over sex are less about sexual practices than mentalities. Young adult liberals engage in sex for enjoyment whereas conservatives feel compelled to motivate sex for reasons beyond that, to serve some overarching relational purpose.

Liberals are pragmatic while conservatives are idealistic.

In his extensive research on the sexual habits of young Americans, Regnerus found that liberals are pragmatic about sex and marriage while conservatives are more idealistic.

Blues are more likely than reds to pursue higher education. With that, they tend to be more strategic about their relationships, slower to sex and less likely to draw a strong link between sex and marriage. They are also less judgmental about the sex lives of others.

For liberals, it is not normative to marry before age 25. They tend to put education and career before relationships rather than trying to juggle school or a career, a marriage and kids. Thus, they tend to marry and bear children later. And as a result, they divorce less than conservatives.

Many Americans consider reds to be anti-premarital sex. Yet red states carry the highest numbers for teen pregnancy rates.

Conservatives are no longer mostly Christians or devoutly religious. According to researchers at the University of Texas, the conservative subculture of American college students are quite sexually active.

Regardless of religiosity, conservatives tend to use sexual relationships to foster or follow marriage, even if they don’t actually get married as they intended.

It’s quick to sex and nearly as quick to marry. Marriage by age 25 is common. Those who aren’t married by 25 often feel they are at risk for never finding a spouse.

“We are becoming a culture

Education and gender appear to play a significant role.

Less educated conservative men have the highest number of recent sexual partners, averaging 2.5 per year, while red, educated women are the most sexually conservative and risk averse. These women have brains and when they have sex, they do it in relational patterns that emphasize commitment.

Today, marriage is on the decline and it’s predicted that America is steering toward a blue future. Not necessarily as liberal as Europe, but we are becoming a culture far more accepting of cohabitation and children born out of wedlock.

While most Americans still wish to marry, we are becoming a culture of serial monogamy where cohabitating and having children before marriage is not uncommon. This results in later and fewer marriages as well as a fertility decline.