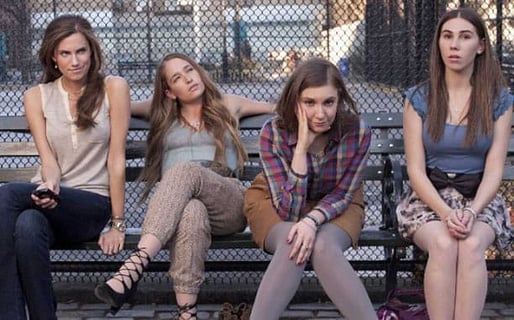 What Guys Can Learn From Watching HBO’s “Girls”

The new HBO show “Girls” has created a lot of buzz with its frank dialogue, realistic sex scenes and candid portrayal of male and female dynamics. While some criticize the show’s lack of diversity and others applaud its accurate depiction of young women, it’s hard to argue that there isn’t something both men and women can learn from watching.

The show centers around the lives of four 24-year-old women, detailing their weekly sexcapades, job woes and every awkward or embarrassing situation you could imagine — situations where you find yourself laughing and wincing at the same time.

Hannah is a college graduate recently cut off financially by her parents, who she had been living off of for the past two years while she writes her memoir, which she says she can’t finish until she actually lives it. On top of that, she was also fired as an intern at a literary firm when she asked to start getting paid.

She eats cupcakes in the bathroom, Googles things like “stuff that gets up the sides of condoms” and has uncomfortable and degrading sexual encounters with Adam, a guy she refers to as her boyfriend even though he never returns her phone calls.

While Hannah is confident in other matters of her life, that confidence quickly fades when she’s with Adam, who at one moment can be a total jerk, but at the next can be a nice guy.

No matter how successful or poised, most women have slept with men like Adam. These men are the ones who have to “consider” using condoms during sex and scrutinize every flaw on a woman’s body. Yet, they somehow always win the woman over by being somewhat “loving.” Yes, men actually do these things and yes women fall for it.

Hannahs’ roommate Marnie works at an art gallery and is constantly irritated with her seemingly perfect boyfriend, who is always trying to please her when all she wants him to do is have a mind of his own and take a little control in the bedroom.

Lots of girls act like this — they say they want a nice guy who respects them, but they also want a bit of a bad boy. It’s a frustrating balance guys must have between the two. It also doesn’t help that Marnie’s friends reinforce this confusing behavior by saying her boyfriend has a vagina. Yeah, it can be pretty funny to hear, but isn’t it a little contradicting for women to use their vaginas as a way to refer to nice guys?

A British free spirit who wants to make her own rules when it comes to her sexuality, Jessa copes with an unplanned pregnancy by blowing off her abortion to go to a bar and drink white Russians and hook up with a stranger in the bathroom.

Jessa represents a large percentage of 24-year-old women these days because she doesn’t want someone else to define what is sexually acceptable. Whether it’s a front or not has yet to be seen.

Shoshanna is the most optimistic and naïve of the four girls. She’s a virgin who admires her friends’ sexual know-how, no matter how alarming.

The fact that Shoshanna thinks her virginity is the biggest baggage she will carry into a relationship, shows how having a nonexistent sex life can be considered just as taboo as participating in the wildest sexual behaviors.

“Girls” is full of scenarios that may be heightened and exaggerated for TV but are true to some extent. The girls aren’t perfect — they can be hypocritical, unsympathetic and unlikeable, but that’s exactly how real women, and men, are, too.

While it’s not a perfect show, the point isn’t to take it literally but to start a variety of discussions about sex, love, life, growing up and more.

What Does “The Choice” Offer Men?