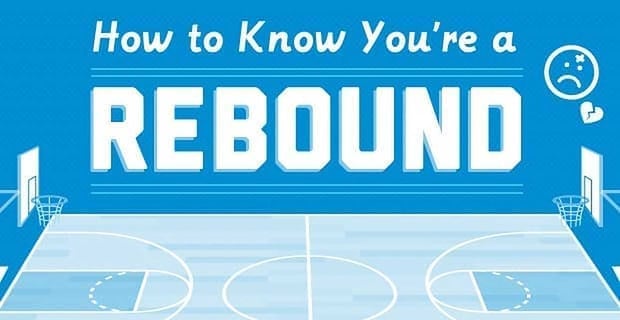 How to Know You’re a Rebound

At first glance, a rebound relationship is an alluring alternative to heartbreak. Blinded by the pain of rejection, women around the world are guilty of latching onto the first male passer-by in a feeble attempt to validate her self-worth.

Albeit unconscious, a wounded woman will seek a rebound relationship for the sole purpose of appeasing her own discomfort. Trust me when I say women become willing to take drastic measures to prove to themselves once again that they are attractive, loveable and important.

In an effort to recreate the emotional security felt in their previous relationship, women will carry on a sexual and/or emotional affair and create what I like to call a “pseudo-relationship.”

If you have become the object of a rebound, you will likely be completely unaware of the function you serve. You will unknowingly be engaged in a psychological game that will quickly end at your expense.

So how do you know if you’re a woman’s rebound guy? Easy. Take heed to these tips, tricks and warning signs and you can avoid the humiliation and heartache that inevitably accompanies a rebound relationship.

1. When was her last relationship?

If you’re interested in a new woman, always, always ask her how long it’s been since she was in her last relationship. If it has been less than six months, move cautiously, but give her the benefit of the doubt.

Assume she’s processed the event and healed from it, but be on the alert. If it’s been less than three months, slow your roll. Three months is not a long time, although it may feel like forever when you’re recovering from a breakup.

If your gal was in a significantly serious relationship, she probably needs more time to mend her broken heart. If it’s been less than a month, back off. Your mind should be screaming, “Red flag! Red flag!” A woman is in no condition to enter a new relationship after a mere 30 days. She’s probably still plotting revenge at that point.

“When a rebound relationship

2. Does she always talk about her ex?

If your lady friend still talks about so-and-so incessantly, you are definitely her rebound guy. Of course, there should be some conversation about their relationship and what happened to it, but it should be minimal.

If she calls you his name by mistake, it’s not a good sign. In other words, if he’s a topic of conversation and his name is on her lips, he’s still on her mind and has control of her heart.

3. Does she still keep in contact with her ex?

If she is still texting and talking to her ex, you are her “just in case” guy. You are the guy who is going to be there to comfort her just in case she doesn’t get back together with her ex.

Remember, we women are a clever bunch and know how to cover our tracks. The texts and calls she is getting from a “Michelle” might actually be disguising her communications with her previous boyfriend, Michael.

Wise up and be on the look out for questionable messages and phone calls.

If your new gal seems to be angry, resentful and cynical when it comes to men and dating, she probably hasn’t completely healed from the angst of her previous relationship. If you’re not careful, you may very well become her emotional punching bag.

After all, that’s what rebound guys are for. They are there to take on the fury of a scorned woman, punished for another man’s mistreatment.

5. Has she introduced you to her family or friends?

If she doesn’t want to engage in the conventional dating process, chances are you’re a rebound guy.

Women who are interested in legitimate relationships want to be courted. We want dinner and a movie, long phone conversations, roses and poems and all of that junk. We want to show you off to our friends and introduce you to our parents.

If she’s only meeting you behind closed doors, something isn’t right. This is especially true if she only seems to be interested in sex.

Once the woman who has sought a rebound relationship gets her fix, she will quickly move on. If you are seeing a woman for a few weeks and she bolts, you may very well have been the victim of a rebound.

When she feels attractive and appealing again and realizes life will go on after so-and-so, she will make an abrupt exit.

When a rebound relationship ends, the roles reverse. The one who has been dumped (that is, the one who sought you out as a rebound) becomes the dumper. This makes her feel empowered, and she walks away from the broken relationship feeling better about herself. Then the whole vicious cycle begins again when you, the dumpee, seek someone to rebound with.

How to Get a Shy Woman to Initiate

How to Get a Girl’s Attention Online

How to Have a Skype Date