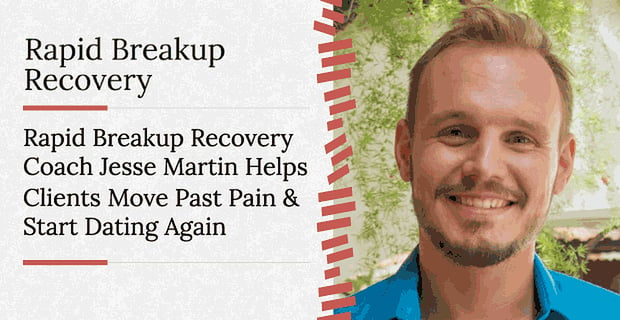 The Short Version: Rapid Breakup Recovery Coach and Author Jesse Martin turned the lessons he learned while healing from tough breakups into a breakthrough movement. He teaches his clients how to approach the pain of heartbreak head on to avoid prolonged agony, and he shows people that the lessons they learn from heartbreak often play a big part in the recovery process. Those lessons can lead to breaking self-destructive patterns in the future. Jesse offers personalized coaching, insights from his book, and support from his blog to help others heal and restart their journeys to finding lasting love.

For Jesse Martin, his first heartbreak cut the deepest. He was madly in love with his college girlfriend, and, although they had hit a few rough patches in their relationship, he thought things were getting better and had turned a corner.

Then she told him she needed a break, so he gave her the distance she requested even though he was panicking on the inside, but instead of taking the time away to focus on improving their relationship, she used it to start a new relationship with someone else.

“I didn’t see it at the time, but our relationship had become toxic. I had lost my sense of direction as a man in the relationship — but also in life,” he said. “The breakup ended up being so hard on me because I used the relationship to define myself. I believed I needed her in my life to be happy.”

Jesse Martin brings the lessons he learned from his own breakup to his Rapid Breakup Recovery coaching clients.

As a result of this agonizing breakup, and others, Jesse learned more about paying attention to his needs, values, and level of happiness. Despite his growth, he continued to experience heartbreak throughout his adult years, but with each one, he looked for answers and healing.

“Adversity led to more adversity, and it would set me up for unfulfilling relationships as an adult,” he said. “That is until I gave this area of my life the attention it deserved. That meant going into therapy, a lot of self-reflection, meditation, and other techniques to get in touch with my inner self.”

Now, he teaches clients these transitioning tools and more through his Rapid Breakup Recovery coaching.

By the time his third significant breakup happened, Jesse wasn’t shocked, and he had the tools to acknowledge what was true. Although things were hard, they were far from unbearable. Today he enjoys beautiful, loving relationships and feels free from the angst of his past. He has healthy friendships with his ex-girlfriends, and those friendships have love and respect as a foundation. Both parties have a clear sense of why there was a lack of compatibility, and Jesse wants his clients to achieve the same self-awareness and results.

“I can teach you how to approach the pain head on so you can be at peace, and you don’t prolong your agony any longer than necessary,” he said. “Don’t run away from your pain. You need to be with it and face it.”

Breakup Coaching Can Turn Devastation Into a New Beginning

Once Jesse found his calling, he saw that men had significantly less support in healing from breakups. So he started to provide one-on-one coaching for men who felt stuck in a place of shame, heartache, embarrassment, or confusion about their breakups. Jesse said he believes clear differences exist in how men and women view a split.

“Women tend to have better support networks when it comes to breakups,” he said. “Men tend to connect a breakup with a loss of status. A lot of men report that they feel worthless and that they won’t ever find someone as good. I think these feelings are less prevalent for women.”

Emotions can fluctuate wildly early on in the post-breakup healing process.

One of Jesse’s clients from Miami said he found his restorative coaching style provided just the right amount of support and accountability he needed to get through his tough time.

“I want to take the opportunity to personally endorse Jesse and his therapeutic coaching methodology,” the client wrote in an online testimonial. “His coaching helped ease the devastation I was feeling, and he gave me methods and techniques to survive the storm I was feeling.”

“By now, I’ve worked with many guys going through a wide range of scenarios,” he said. “Although everyone’s situation is unique, recurring patterns tend to surface, and I see some themes across those patterns.”

Jesse doesn’t help clients forget about their breakup but instead teaches clients to walk away with a sense of peace about what happened. He wants clients to rarely think about the past relationship, be thankful for the good times, and understand what went wrong.

Jesse used his years of experience coaching and writing about breakups to complete “The Breakup Recovery Manual for Men.” It is the book he said he wished he’d had when he was in his darkest hour. Jesse describes it as a step-by-step guide to recovery. Readers learn how to manage their emotions to work through the pain and understand why their exes are behaving the way they are.

Jesse wrote his book, “The Breakup Recovery Manual for Men,” as a step-by-step healing guide.

“The intensity of the pain we feel when a relationship ends is proportionate to the amount of adversity you face as a child,” he said. “Those who had an adverse childhood will often have very intense breakups. It has to do with our template for attachment towards our parents which we develop as children.”

Jesse said that we use the same attachment pattern for our relationships. For example, if someone felt abandoned as a child, and then someone leaves a relationship with them, all of those childhood fears come up.

Jesse wants readers to know that they aren’t alone and that they have what it takes to overcome and survive a breakup. At the same time, he wants the book to help guide them through the rebuilding process to prepare for a stellar future.

The Blog Explores Healthy Ways to Stop Obsessing Over Your Ex

Jesse’s blog can help those who need in-the-moment advice as it covers a multitude of topics, including reader questions, healing deeper issues, dealing with the aftermath, dating again, and many others.

As a coach, Jesse uses the blog to help normalize post-breakup feelings and emotions. In his blog post, “My Girlfriend Left Me For Another Guy,” he tells men to focus on the future.

“It’s normal to feel sad and depressed after a breakup,” he wrote. “And you know what? You’re going to get over her. You’re going to deal with your breakup and move on. These days may be the hardest, but it keeps getting easier and easier. And if you put the tools and techniques on this site to work, you’ll become a better man because of it!”

Jesse receives plenty of feedback on his books and blogs, with many readers thanking him for his help.

When it comes to being honest with clients about doing the hard work, Jesse maintains his no-nonsense approach. He urges those who are in the beginning stages of healing from a break up to exercise the ‘no contact rule’ right away. He said the first step toward healing is to stop communicating with the ex and start focusing on accepting reality.

For Jesse, Expanding His Healing Movement is a Top Priority

The impact of Rapid Breakup Recovery on men — and some women — has inspired Jesse to expand his healing movement.

“This has been a passion project for me, and now I’m diving into it full time,” he said. “I am producing more content for the website, including podcasts and YouTube videos. I’m turning this into a bigger movement.”

Clients who are willing to go the distance inspire Jesse and remind him of the lessons he learned early on in the midst of his own healing process. As a result of Jesse’s coaching and support, many clients learn how to create a better relationship with themselves.

“The internet makes this service possible. I can connect with people who are going through this around the world and offer a community of people to help support them,” he said. “This is an age-old problem, and there aren’t many good solutions out there. But I’m trying to provide one.”

As a true romantic and people-lover at heart, Khaya Caine is happy to bring her expertise as a Parent and Community Engagement Specialist and Certified Professional Dating Coach to DatineAdvice.com. Khaya honed her sharp communication and writing skills as a journalist and copy editor at a daily newspaper. And, on DatingAdvice.com, it's Khaya's goal to help inform today's singles of the solutions that make finding love in the modern world a reality.