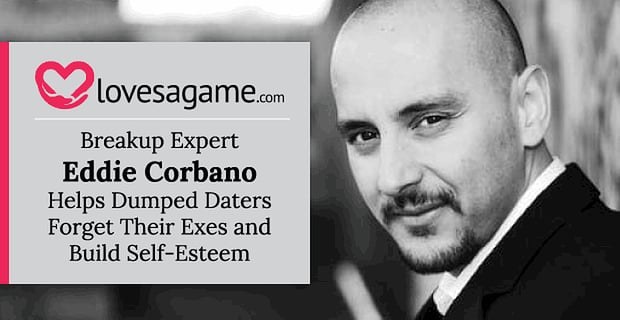 Short version: Breakup expert Eddie Corbano wants to help clients shake persistent myths about failed relationships. After he finally came to understand why his own romantic relationships were failing, he decided to share his wisdom with other disappointed daters. So Eddie created LovesAGame.com, through which he posts articles and teaches courses designed to remedy post-breakup woes. He describes his style of advice as direct, and he knows what daters should do if they’re repeatedly failing in their romantic partnerships. What’s the biggest post-breakup myth Eddie is trying to dispel? That separated couples should get back together.

Breakup expert Eddie Corbano has a difficult dating history of his own. In his 20s and 30s, he repeatedly experienced negative relationships.

“As a young adult, I was very insecure. I didn’t believe in myself,” he said. “That led to a vicious cycle of breakups. I attracted a certain kind of woman. Everything would go south, and we’d have a bad breakup. Within a month or two, the whole thing started again.”

Eddie Corbano teaches people how to get over their exes, not how to get them back.

He didn’t know how to end the destructive dating cycle, and, eventually, even the relationship with the woman he thought he’d marry ended just like the others.

“I thought she was ‘the one,’” Eddie said. “The whole nine yards. It was two weeks after we planned our wedding that the big breakup came. Six months after the breakup, I hit rock bottom so hard that I found myself on the floor of my apartment, drunk.”

Devastated by the end of yet another relationship, Eddie got back in contact with a relative who interrupted his hopelessness. The relative asked him, “Why do you think your ex is responsible for your happiness?”

“This question was like a bomb, and it made me rethink my life,” he said. “He gave me a lot of things I could apply to my breakup, and, after that, I completely recovered.”

After he started feeling better, Eddie wanted to share the wisdom he’d learned from his heartbreak with others.

He founded the website LovesAGame.com, where he shares articles he’s written about breakups, divorce, relationships, and self-improvement. Users can also enroll in his post-breakup course, The Ex Detox, to learn strategies for separating themselves from ex-lovers.

“You can say that my mess has become my best,” he said.

Eddie’s Motto: If Someone Leaves You, Let Them Go

Eddie is blunt in his assessments as both a writer and dating coach.

“I tell it how it is. I don’t sugarcoat things. Maybe some are offended, but I think it will help them in the long run,” he said. “I tell you what’s best for you. I take you strongly by the hand and tell you what to do.”

One aspect of Eddie’s work that is particularly important to him is busting persistent myths around breakups and divorce.

“Most of the things you hear from friends aren’t good. Men are often told by their peers that they’ll get over the hurt the fastest if they just date someone else immediately. That is complete BS,” he said.

After the flame dies in a relationship, it can leave both individuals searching for meaning.

He also doesn’t think that separated couples should ever get back together. He believes that there was a reason you broke up with your ex, and that the best course of action is letting go and moving forward.

“I hate these ‘get your ex back’ things. If someone leaves you, let them go. I’m against that idea that you should ever try to get them back,” Eddie said.

Though he has limited availability because of his own family demands, Eddie does offer occasional one-on-one coaching — even emergency sessions. He likes to start with practical advice in the first few sessions before moving into the heavier emotions later.

Now that his children are older, Eddie said he plans to add more coaching sessions to his schedule.

“I plan to start coaching more soon. I don’t want to do email coaching; I want to see people in person because it is so much more effective.”

Eddie’s website typically draws users who are somewhat older and have already forged their paths in life. Many of the people who take his courses are between the ages of 35 and 65.

“My clients aren’t usually under 30. You have to have a certain life experience. If you’re 17, you can’t change your life because your life is still evolving,” he said.

He created LovesAGame.com in 2007 and has been developing new content for it ever since. He wrote articles based on his own experience before evolving to add guides and an ebook.

“At first, I wrote stuff that was on my mind, and then it got bigger and bigger,” he said. “I wrote a report ‘Seven Reasons You Should NOT Want Your Ex Back.’ I wrote an ebook that came with an audio file that would help you meditate and stop thinking of your ex. It included subliminal messages that would help you stop obsessing.”

Users can interact with the website in a variety of ways. The simplest are signing up for the daily newsletter or enrolling in his popular Ex Detox course. The course includes a member forum where users can communicate with each other, and Eddie gives his feedback, as well.

Eddie suggests website visitors take the healing test to see when they need to begin getting over an ex.

“We have a quiz through which people going through breakups can see where their areas of improvement are, and what they can do to improve the “Healing Score” they receive,” he said.

Eddie is passionate about helping others heal after breakups because he believes that failed relationships can lead to considerable growth.

“The shocking truth is that romantic problems reach into all areas of your life,” he said. “I want to help people use their breakups as a catalyst for change. I want to help them know what’s lurking in their lives.”

Get Over a Lingering Ex By Forging Your Own Path

One of the most significant problems Eddie sees in relationships is that they are often co-dependent. The best way to move forward after a breakup, then, is to find something to which you’re willing to commit yourself.

“A good part of getting over someone is finding something you believe in and following it,” he said. “So you have a path of your own, not just following the ex or the breakup.”

Eddie has plenty of clients who recognize the growth he helped them experience after a breakup. One client, Steve, writes, “I seriously do not think I would have got through my sadness without your brilliant advice, your encouragement, and your relentless support.”

Eddie has plans to make much more informative content available on LovesAGame.com.

Though Eddie has already developed a significant number of resources for healing broken hearts and moving forward, he plans to expand into new media channels that support his goals.

“I want to publish a few more courses, and I want to build an extensive library of YouTube videos, including a new one each week,” he said.

All of the new content Eddie plans to develop will not be singularly motivated by his negative dating life, but, rather, his newfound happiness.

“With my new content, I want to help my readers and listeners have fulfilling marriages and relationships,” he said. “I want to offer methods for having a relationship with that one person — like I did. I’m still married to the woman I met shortly after that bad breakup.”