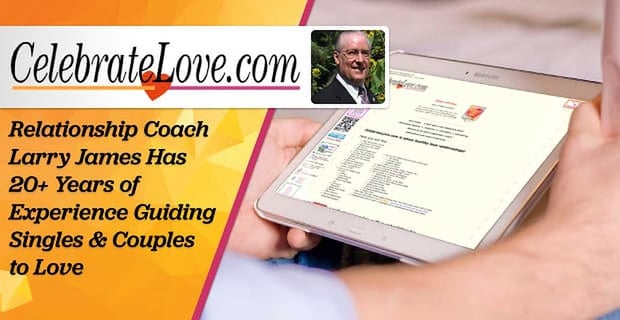 The Short Version: Over the past 21 years, relationship coach Larry James has established a reputation as an authority on love with heartfelt advice about dating, relationships, and marriage. The published author and ordained minister shares his insights on love through a variety of mediums. His first book, “How to Really Love the One You’re With,” endorses positive strategies to connect with someone in deep and meaningful ways. As a relationship coach, he discusses more personalized solutions to relationship troubles and helps people help themselves. Based in Arizona, Larry also conducts touching wedding ceremonies focused on celebrating the love between two people. Whether he’s advising a conflicted single in a one-on-one discussion or imparting universal relationship lessons in his books, Larry’s supportive words of wisdom gently steer people in the direction of love.

After a painful breakup, Larry James turned to a therapist to help him deal with his broken heart. The therapist suggested he sort out his thoughts and feelings in a journal. Having an outlet helped him understand the inner workings of relationships, and it inspired him to embark on a new career path.

Larry filled page after page with thoughtful musings on the nature of love. He’d always loved writing — he’d written for his high school newspaper as a teen — and his therapist encouraged him to keep at it.

Eventually, Larry wrote a 30-page booklet about the search for a healthy relationship. His therapist read it and was impressed by Larry’s intuitive understanding of loving relationships. At that point, Larry realized his private musings could be valuable to other people in search of love, so, he compiled his writings into a book titled “How to Really Love the One You’re With.”

Today Larry James is an acclaimed author, relationship coach, and wedding officiant living in Arizona. He has dedicated his life to helping singles and couples find and maintain loving relationships. On his website, CelebrateLove.com, you’ll find a wealth of information and resources for commitment-oriented people.

“My breakup caused me to reach out,” he said. “I started writing about relationships, and I enjoyed it so much I turned it into a blog and a career. I’ve been doing that ever since.”

In the past 21 years, Larry has appeared on more than 650 radio talk shows and written more than 1,000 blog posts. He communicates the nuances of love with clarity in his writings and offers individual support via relationship coaching. His honest advice and practical strategies urge singles and couples to cultivate healthy, loving relationships.

Larry’s passion for celebrating love led him to become an ordained minister. His insights into loving relationships have brought meaning and joy to hundreds of wedding ceremonies across Arizona.

“Larry James speaks from the heart,” wrote best-selling author Jack Canfield. “His words carefully craft a message of hope that inspires couples to work together in a spirit of love and understanding.”

After more than 20 years working with singles and couples, Larry James has developed his own personalized coaching methods and style. His one-on-one relationship coaching offers an objective ear to relationship questions and concerns. He talks to clients by phone in one-hour sessions because he finds people (men, in particular) open up better that way. Larry can intuit much about a person’s relationship from their tone of voice and knee-jerk responses on the phone.

Larry asks pointed questions to get to the heart of a person’s relationship issues. “Most of the time the answer needs to be dug out,” he said. “I like to come up with questions and let people come to their own conclusions. If you ask the right questions, you can do anything in an hour.”

As a relationship coach, Larry helps others help themselves. His advice can put men and women on the right path toward a healthy relationship, but they have to put in the effort to make it happen. He’s direct and honest with his coaching. “I’ll tell people straight up that relationship coaching doesn’t work,” Larry told us with a laugh. “That gets their attention. I tell them, ‘You have to do the work, or I can’t help you.'”

Singles and couples are drawn by his willingness to listen, understand, and help. One woman in Italy calls him once a year for what she calls her relationship tune-up. His knowledgeable advice guides people on their journeys to healthy, loving relationships.

Larry prioritizes helping people over profit. He guarantees satisfaction in every call. If, at the end of an hour session, you don’t feel it was worth the $120 an hour he charges, he’ll give it to you for free. “So far, no one has called me on that,” he told us.

More often than not, former clients praise him for his caring support. “I want you to know it is very comforting to know there are people like you who have such a genuine care and love to help others,” wrote one person in a thank-you note posted on the site. “I hope many others benefit from your knowledge and wisdom.”

His Books Have Sold Nearly a Quarter Million Copies Worldwide

Throughout his career, Larry has written extensively about the nature of love. His first book, “How to Really Love the One You’re With,” is an affirmative relationship guide full of messages of hope and strategies for relationship success. This well-received book was featured on ABC’s “The View” in 1999. Larry went on the show and personally signed over 200 copies for audience members.

One reader wrote a letter to Larry in 1996 to say she and her husband found his book to be transformational for their marriage of 33 years. “The relationship with my husband reminds me of when we were newlyweds!” she gushed.

Larry offers a relationship primer in an encouraging and knowledgeable voice.

“I bought several copies of your books and gave them to our grown children and to several of my women friends,” she wrote in a follow-up message in 2000. “Wish a copy was required with every marriage license!”

Larry has written five inspirational books, available on Amazon, with do-it-yourself advice catering to high-functioning singles and married couples. For instance, “LoveNotes for Lovers” give readers creative suggestions for romance.

Dr. John Gray, the famed author who wrote “Men are From Mars and Women are From Venus,” endorsed Larry’s books wholeheartedly. According to him, “LoveNotes for Lovers can move your relationships in the direction of acceptance, understanding, fulfillment, and unconditional love.

In the ‘90s, Larry began writing about relationships for himself, and now he has a readership of nearly a quarter million people. If you want a signed copy of his books, you can call (480) 205-3694.

Larry is a prolific writer who’s passionate about the subject of love. You can find more of his insights on his relationship blog and wedding blog, where he’s posted more than 1,000 articles with topics ranging from why being single can sometimes be a good thing to how to remember your anniversary.

Plus He Officiates About 75 Weddings a Year

In addition to his work as a personal relationship coach and acclaimed author, Larry James is an ordained non-denominational minister active in weddings in Arizona. He puts his own special touch to the ceremonies — like adding the words “I love you” to the exchange of vows — and facilitates heartfelt moments for couples. His eloquence has brought tears to the eyes of many brides, grooms, and guests over the years.

His kindness and compassion has gotten him dozens of rave reviews as an officiant. He was voted Best Officiant five years running by the Wedding Chronicles Reader’s Poll. His growing popularity as a minister keeps him busy — he conducts about 75 weddings a year and is one of the most sought-after officiants in Arizona.

“Our vows were memorable because of you; they weren’t just a bunch of words, they were meaningful and they fit us. We thank you for making our wedding day so special!” — Taffey and Ross Miller, who were married by Larry James

Over the years, Larry has conducted outdoor weddings on the beach, traditional weddings in churches, and intimate weddings on a balloon ride. He goes wherever couples bid him and brings his authority as a relationship expert to the exchange of vows.

On Valentine’s Day 2013, Larry conducted a record-setting ceremony, renewing the vows of 762 couples at once at Fountain Park in Fountain Hills, Arizona. “We have come together in the presence of love,” he said to the beaming crowd of couples, “to witness and celebrate the marriage of everyone here… we’re grateful for the ties of love that bind us all together giving dignity, meaning, worth, and joy to all our lives.”

To help couples in their new lives together, Larry gives the people he’s married a gift certificate for a one-hour session of relationship coaching. He knows the work doesn’t stop when you say “I do” and wants to help the seeds of love grow and flourish any way he can.

“We could not have been happier with Larry James,” wrote Cindy Lambach, a bride on the WeddingWire. “His professionalism was outstanding, and his patience was so appreciated.”

Whether they’re on the beach or in a balloon, Larry makes it his mission to express what love means and celebrate the sacred bonds between two loving hearts.

From the heartache of breakup, Larry found the strength, wisdom, and compassion to uplift and inspire other romantics around the world. The celebrated relationship coach and author shares helpful tips based on over 20 years of experience in the dating industry.

In his work as a wedding officiant, his passion and belief in love shine through his every word as he gives voice to the unbreakable and transformational power of true love. “There are no ties so sweet, none so tender, as those you are about to assume,” he said in a touching ceremony in Scottsdale, Arizona. “Today you’ve chosen to strengthen your bond as your separate lives, each with individual hopes, dreams, and desires, merge into one life.”

As a coach, an officiant, and an advocate, Larry plays an instrumental role in the love lives of many people worldwide. His deep understanding of relationships guides and motivates singles and couples on the path to love.

“I’m encouraged whenever I hear back from couples who say my books or my advice turned their relationships around,” he told us. “I get a lot of satisfaction from knowing I helped somebody.”