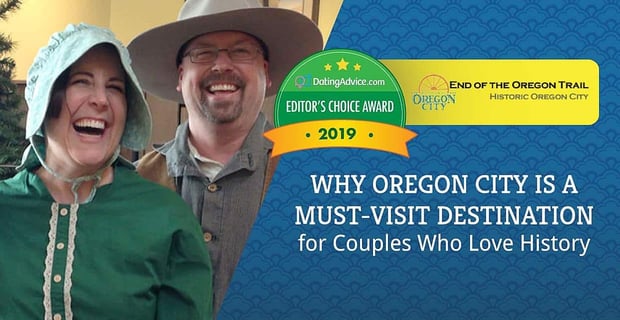 Editor’s Choice Award: Why Oregon City is a Must-Visit Destination for Couples Who Love History

The Short Version: Oregon City is the birthplace of both Oregon and the West and was the last stop for pioneers on the Oregon Trail. Now, the city is a popular destination for couples to explore — just 13 miles from Portland. The region’s rich pioneer history is celebrated by Historic Oregon City at its End of the Oregon Trail Interpretive & Visitor Information Center. Couples can also visit other modern attractions in the city to explore the experiences of early settlers and local Native American history. For its inviting atmosphere and focus on the past, we recognize Oregon City as a fun destination for couples who love history.

“Oregon Trail” was a popular computer game because so many of us are curious about pioneer life. We’re fascinated by the idea of families uprooting their lives to travel thousands of miles across the country to settle the West, and the game gave us a glimpse of what that was like.

However, Bethany Nemec, Development Coordinator at Historic Oregon City, said most people actually know very little about the hardships the pioneers encountered. Nor do many people know what happened when pioneers reached the end of the trail, which is located in Oregon City, Oregon.

That’s why many of the city’s museums and historical sites aim to teach visitors more about authentic pioneer history.

“We like to fill in pioneer knowledge beyond the old game,” Bethany said. “Things that have a bearing on today like how Oregon is part of the United States and not Canada because of the Oregon Trail.”

Oregon City was the first U.S. city west of the Rocky Mountains, and it was incorporated in 1844. Aside from its pioneer history, the city has had thriving flour, wool, paper, and lumber industries through the years, and remnants of each of these industries are still visible — to those who know where to look.

For couples visiting Portland, Oregon City is a quick trip (only 13 miles away), and the area offers more history to explore than just that of the pioneers, including restaurants and walking tours that encourage people to continue their journeys into the past.

Visit the Last Stop on the Oregon Trail

Oregon City is known as the last stop on the Oregon Trail because it housed the national land claim office. Pioneers were promised more than 600 acres of land if they made the arduous journey to that final stop. So, if they made it to Oregon City, they could claim a large plot of land on which to settle.

George Abernethy, who became the first governor of Oregon, also created a welcoming environment for these pioneers. Abernethy once owned the land where Historic Oregon City’s End of the Oregon Trail Interpretive & Visitor Information Center is now located. Abernethy let pioneers, tired from their months of traveling, camp out on his property until spring came and they could start working on building their houses.

The history of the Oregon Trail is featured prominently in Oregon City, which is why it’s a favorite destination for history buffs.

This history is explored prominently at the interpretive center. “People can make candles and butter, and we’ve got a feature film that goes through what life was like for people at the time,” Bethany told us.

She said that some of the couples who visit the center discuss whether they would have made the move West on the Oregon Trail. Some intrepid history lovers also dress up in pioneer clothes to immerse themselves in the experience of how past generations would have lived.

Interacting with pioneer history helps visitors understand that settlers weren’t as different from them as they may think.

“It seems like you can’t relate to them at all, but I’ve read diaries of children trying to adopt a wild antelope on the trail,” Bethany said with a laugh. “They named it Jenny.”

The Center isn’t the only piece of history worth exploring in Oregon City. History buffs can also embark on a three-hour tour that starts at the Center and moves on to the Museum of the Oregon Territory (which focuses on the area’s Native American tribes, how the influx of white settlers impacted them, and how the famous Willamette Falls affected the growth of the region).

The falls are the second largest waterfall in the United States by volume, and museum visitors have the chance to get up close and personal with this dramatic natural wonder.

Visitors can add other packages to their tours, including a Living History Walk to explore some of Oregon City’s most influential areas. “Main Street is the oldest main street in Oregon,” Bethany said. “Some of the buildings are original, and that character still shines through today, even though it’s a little different.”

Other groups may add the Heritage Homes Tour, which explores houses that belonged to individuals who contributed significantly to the state’s history. One of these is the well-preserved homes of influential fur trader Dr. John McLoughlin, who became known as the “Father of Oregon” for his trading goods store at the end of the Trail. His home is well-preserved in the period style and offers demonstrations of pioneer-era living, including making paper dolls and wool rugs.

Oregon City Bridges the Gap Between the Past and Present

Oregon City helps people make connections to pioneer history in a way that they can’t experience elsewhere. For example, many street signs in Oregon are named after prominent pioneers, and once you learn these names, you’ll start to see them everywhere, Bethany said.

Further, pioneer history explains how Portland received its famous nickname of the Rose City. Pioneers brought roses from their home cities to the West and preserved these flowers either through seeds or clippings stored between two halves of a potato.

“The garden has heritage plants that pioneers brought with them for medicinal purposes or to remind themselves of the gardens they left behind,” said Bethany. “Master Gardeners show visitors pioneer techniques that they still use today to keep that garden maintained.”

“We want to remind visitors that the pioneers were just people. They’re very relatable, and I think that’s important for people to understand.” — Bethany Nemec, Development Coordinator at Historic Oregon City

What’s also important to the Heritage Gardens at the End of the Oregon Trail Interpretive Center is telling a complete history of the Native Americans who lived in the area long before the pioneers came.

“Right now, the movie is bits and pieces of pioneers’ diaries, but we’re going to have one focusing on the perspectives of the tribes from that time,” Bethany said. “We want to remind visitors that the pioneers were just people. They’re very relatable, and I think that’s important for people to understand.”