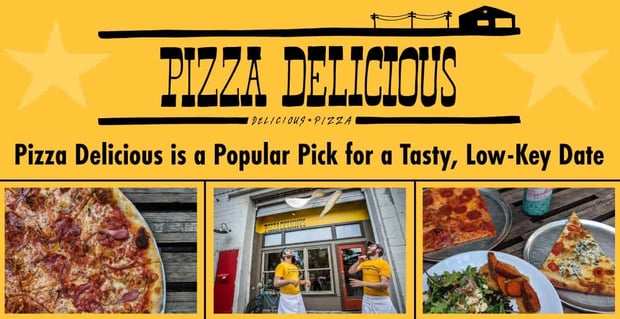 The Short Version: When Mike Friedman and Greg Augarten left New York to attend college in New Orleans, they missed the pizza from their home state. So, they started Pizza Delicious as a pop-up restaurant in 2010 and served up 18-inch, New York-style pizzas once a week. The concept was so popular that Mike and Greg opened up a brick-and-mortar establishment in 2012. Today, Pizza Delicious makes most of its ingredients from scratch, and it has earned many accolades, including our Editor’s Choice Award as a great date spot in New Orleans.

Nearly every night, Pizza Delicious in New Orleans — or Pizza D for short — is a lively hangout for an eclectic group of customers, including families and couples. Some come in to pick up a pie to take home, while others choose to dine in and enjoy the vibrant atmosphere while eating one of the restaurant’s homemade pies or plates of pasta.

Many Pizza D customers are locals who make a meal at the restaurant a part of their routine. Others are tourists drawn to the eatery after learning of its reputation as the top pizza restaurant in New Orleans.

Pizza Delicious has earned a reputation as a top pizza place in New Orleans.

Pizza D Co-Founder Mike Friedman often gets to see that diverse clientele who make their way to the restaurant every night. That’s because the restaurant has an open kitchen, where cooks can see the diners, and diners can watch their fresh meals being made.

The restaurant has also become a popular spot for couples to share a fun meal.

“Tons of people come here on dates, and I know a lot of people who value our pizza as part of their relationship,” Mike told us.

A few of those couples love Pizza D so much that they even include the restaurant in their wedding preparation. Whether they make Pizza Delicious their official wedding caterer or order a bunch of pies for guests at their rehearsal dinners, the restaurant has been part of plenty of couples’ special days.

“Some folks have reached out and said Pizza Delicious has been a special part of their relationship, so they want us to be part of their wedding,” Mike said. “It’s cool that we’ve been a part of so many people’s lives at this point. That’s been really touching.”

During the early 2000s, when Mike and his business partner Greg Augarten were in college, New Orleans didn’t have any notable New York-style pizzerias. That made the two undergraduates even more nostalgic for their pizza-on-every-corner hometowns of Queens and Long Island, New York.

“We were talking about how great New Orleans was, but how bad the pizza is. In New York, everyone eats a ton of pizza. Pizza by the slice is a big thing and easy to grab on your way to do something,” said Mike.

They tried different slices throughout the city, but nothing ever compared to the taste of a pie from back home. They decided that, if anyone were to open that type of pizzeria in New Orleans, it would be highly successful. But years passed, and no New York-style pizzerias appeared.

So, Mike and Greg decided to open their own — and call it Pizza Delicious.

Though both enjoyed cooking, neither had ever tried to imitate the slices that were so common in their home state.

“We did a bunch of experimenting to come up with something that was pretty good, but neither of us had ever made pizza before; we’d just eaten a lot of it,” Mike told us.

By 2010, they’d perfected a recipe that they thought was good enough to sell. On Sunday nights, they’d make pizzas at a pop-up restaurant in a shared kitchen for hungry locals. Soon, their 18-inch New York-style pies were so popular that they began selling them on Tuesday nights, too.

“We exploded, got local press, and became really busy. We had no idea what we were doing, but we ran with it and pushed ourselves. We went from selling 30 pizzas to consistently selling 120 pizzas a night,” said Mike.

Couples Can Choose From a Simple Menu of Fresh Foods

Soon after Pizza Delicious’ reputation spread throughout the city, Mike and Greg decided to open a permanent restaurant in the Bywater neighborhood of New Orleans. Now, they’re open every day — except Monday — from 11 a.m. until 11 p.m. Pizza D is so popular that the restaurant employs a staff of 40 people.

Because of the hard work that goes into making its pizzas, the restaurant maintains a short, frequently rotating menu. Its three staples are cheese, pepperoni, and Margherita pizza — made with mozzarella, marinara, olive oil, basil, and Parmesan cheese. It also has a few popular rotating menu items, including the eggplant parmigiana pizza with fried eggplant and basil. And diners can order a whole pizza or enjoy pizza by the slice.

Pizza Delicious offers a simple menu of pizzas, pasta, and salads made with fresh ingredients.

“We keep a small menu with about five pizzas so we can keep doing everything from scratch. Our specials change weekly, but pepperoni pizza is the most popular pizza — always,” Mike said.

Other restaurant favorites include its homemade meatball pizza special and bucatini carbonara pasta.

For a place that specializes in pizza and pasta, it may be surprising that the Pizza D caesar salad has also garnered quite a reputation.

“People say our caesar salad is the best they’ve had in their lives. We make homemade dressing and croutons, and use real Parmesan cheese,” Mike said.

Pizza Delicious: Earning a Reputation for the Best Pie in the Big Easy

All of the hard work and commitment Mike and Greg have poured into their work has made Pizza Delicious one of the most well-reviewed restaurants in New Orleans.

It was rated the top pizza restaurant by a New Orleans newspaper in 2015, 2016, and 2018, and the outlet noted the diehard fan base Pizza Delicious had attracted.

That reputation has made plenty of pizza fanatics in New Orleans hungry to see whether the restaurant lives up to the hype, and that encourages the Pizza D team to continue improving.

“There are people who come in and say they’re testing us out. They want to verify for themselves. When we set out, we just wanted to make great pizza, but now we perform at a level where we want to make everybody happy,” Mike said.

Couples who head to Pizza D for a date can also evaluate the restaurant by trying some of its diverse options. They could even share two slices of pizza, pasta, and a caesar salad to get the full award-winning experience.

Pizza Delicious set out to solve the problem of there being no New York-style pizza in New Orleans. While the restaurant has come a long way in just under a decade, Mike and Greg haven’t forgotten the mission they set out to accomplish in the first place.